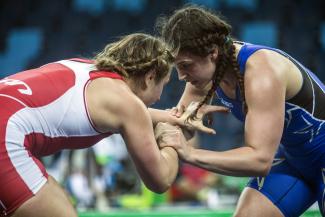 CORSIER-SUR-VEVEY (March 3) – United World Wrestling this week, following constructive discussions with the International Olympic Committee and the federation’s bureau members, approved a bracketed separation of all 2015 world finalists at the 2016 Olympic Games.

International wrestling does not seed or rank wrestlers, which has meant that some of the world’s top competitors could meet in the early rounds of a competition. The change to separate the returning world finalists was made to ensure that more top competitors would have the opportunity to meet in the Olympic finals.

“We take our Olympic commitment very seriously and trust that this system will modernize our sport,” said United World Wrestling president Nenad Lalovic. “We believe that the separation will result in an improved Olympic Games for both our athletes and fans."

The ruling means that the returning world champion will be placed on the upper bracket, and the silver medalist in the lower bracket. Neither wrestler will receive one of the four qualification round matches at the Olympic Games.

Only returning wrestlers, not the nations they represent, will be split. Any nation whose finalist fails to make the Olympic roster cannot transfer the separation to the incoming wrestler.