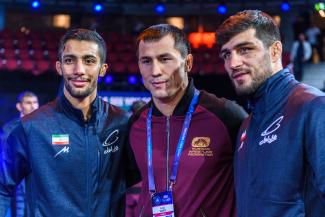 OSLO, Norway (October 18) -- Greco-Roman had the most Tokyo Olympic medalists entered for the World Championships but only one gold medalist -- Mohammadreza GERAEI (IRI). He was primed to win the gold in Oslo at 67kg. And he did so in dramatic fashion, coming from behind most times. Roman VLASOV (RWF) also claimed a world title, his first since 2015 which also gave RWF the team title. Iran had four gold medalists and came second in the team title race. Moldova had it's first-ever Greco-Roman world champion as Victor CIOBANU (MDA) claimed the gold at 60kg. Watch all the 10 finals from Oslo

OSLO, Norway (November 26) --- Hassan “The Greatest” YAZDANI (IRI) headed into the Oslo World Championships with revenge on his mind. He lost to career rival David TAYLOR (USA) in three consecutive matches – including once in August via a last-second takedown in the Tokyo Olympic finals.

Yazdani turned the tides in Oslo on a cold October night and exacted revenge on Taylor and claimed his third world title.

United World Wrestling sat down with Yazdani after his epic win to talk about the losses that drove him to become a three-time world champion, what was different about his Iranian team in Oslo and what’s motivating him to chase a second Olympic gold medal.

The Epic Oslo Matchup:
Yazdani controlled the 86kg world finals match from start to finish to notch a solid 6-2 victory over Taylor in the highly anticipated 86kg final at the Oslo World Championships.

Yazdani's victory, coming two months after a heartbreaking loss to Taylor in the final at the Tokyo Olympics, gave him a third world title to go with his 2016 Rio Olympic gold, and capped a remarkable day for Iran in the Jordal Amfi arena.

"I made the people of Iran happy," Yazdani said. "I need to appreciate Taylor, because he worked as a motivation and inspiration for me to work better and better and become the champion."

The vocal contingent of Iranian fans were sent into a frenzy when rising star Amir ZARE (IRI) claimed the 125kg title, having earlier seen Iran gain finalists in all four weight classes that got underway Sunday, including Yazdani's cousin Amir YAZDANI (IRI).

"Iran always supports their wrestlers and fans here were great," Yazdani said. "And it was because of them and God I won."

The United States had mixed success in the two other finals, with Kyle DAKE (USA) prevailing at 74kg, but Daton FIX (USA) coming up short against Abasgadzhi MAGOMEDOV (RWF) at 61kg.

In Tokyo, Yazdani had to settle for the Olympic silver when Taylor scored a takedown with 17 seconds left for a 4-3 win in the final. On Sunday, he never gave the American the chance to get close.

Yazdani continually kept the pressure on, using an underhook to force Taylor to the edge and score a pair of stepout points in the first period. In the second period, he added a takedown, before Taylor got on the scoreboard with a takedown with 1:03 left.

With the clock ticking down, Taylor tried a counter lift, but Yazdani held firm and dumped him to the mat for a takedown and the final points of an well-earned victory.

"He's a great competitor," said Taylor, whose lone world title came in 2018, where he beat Yazdani in the first round. "Not my day."

Asked what he could have done differently, Taylor quipped, "Scored my points. He's a good wrestler. We will go again."