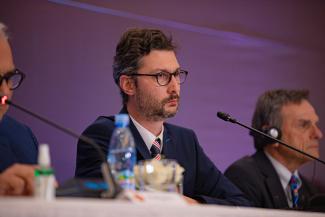 CORSIER-SUR-VEVEY, Switzerland (January 21) -- United World Wrestling announced a significant change during a quarterly Bureau Meeting as Carlos ROY was appointed as the Secretary-General. The change is effective immediately.

The University of Lausanne graduate joined UWW in 2009. He worked closely with the previous Secretary-General on various aspects of the federation’s governance, with the responsibility of the board and Congress meetings, regulatory and institutional relations with member federations, as well as the coordination of the continental councils and the Commissions’ work.

"Carlos has served UWW with the utmost integrity and we congratulate him for the new role," Nenad LALOVIC, UWW President, said. "He has vast experience in governance, administration and international sports. I am confident that he will continue to help our sport grow with the new responsibility."

He was also in charge of the anti-doping program until UWW signed an agreement with the ITA in 2019 for the management of the anti-doping activities. He has been instrumental in organizing wrestling at the three Olympics -- London 2012, Rio 2016 and Tokyo 2020.

“I am honoured and grateful to the President and the Board for their confidence," Roy said. "I look forward to continuing the work of constant improvement of our sport and organization, together with my very talented colleagues."

Roy assumes the role after the resignation of Michel DUSSON who served UWW for over 35 years. His contribution to wrestling has been immense. 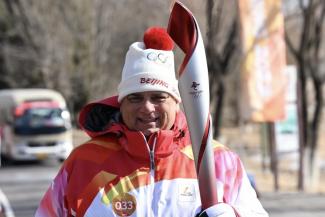 Lalovic, in addition to his obligations as an IOC Executive Board member, had great recognition on the opening day of the Games as he was one of the few bearers of the torch that lit the Olympic flame at the National Stadium.

“Being the torchbearer at the Olympics is a great honor and one of the most memorable moments for me, personally and professionally,”  Lalovic said.

The Olympic flame was later placed inside a giant snowflake and raised high above the ground, where it will remain lit for the duration of the Games — February 4-20, 2022.

“I wish luck and success to all the athletes competing in Beijing,” he said. “IOC and Beijing Organising Committee have been phenomenal in organizing these Games despite the challenges due to the pandemic. With the growing popularity of winter sports, these Games will be an inspiring moment for sports lovers around the world and in the Olympic Moment.“

Lalovic, who has been the UWW President since 2013, was also one of the bearers of the Olympic torch lit at a traditional ceremony in ancient Olympia in Greece. The Olympic torch for these Games was carried by some of the most celebrated athletes and public figures in China while only selected foreigners had the privilege of being part of this abbreviated ceremony.

Unlike previous Olympic torch-carrying ceremonies, the torch for the Beijing Games was carried for only three days in three areas of the Chinese capital. In the build-up to the Games, he participated in the IOC Executive Board and IOC Sessions held in Beijing before the official opening of this edition of the Winter Games.