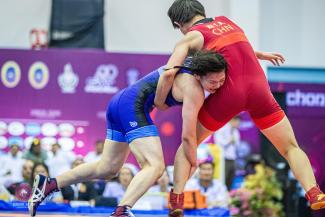 Japan finished with 200 points and earned medals in all 10 weight categories. The medal haul included four gold medals, two silver medals and four bronze medals. China finished second in the team standings with 157 points, while India was third with 123 points.

Imai, a Klippan Lady Open champion, won her second straight title at the Junior Asian Championships, beating Anudari NANDINTSETSEG (MGL) by 10-0 technical superiority in the finals at 53kg. She went up 4-0 in the first period. In the second period she added two takedowns before ending the match with a gut wrench.

Sawa cruised to the gold medal at 57kg with a 10-0 victory over Nuraida ANARKULOVA (KGZ). She built a 6-0 lead after a takedown followed up by two gut wrenches. Sawa then took Anarkulova down to her back late in the first period, nearly securing the fall before settling with a technical superiority.

Kodama claimed her gold medal at 62kg by defeating Yaru WU (CHN) 15-5 in the finals. She used two first-period takedowns to go up 4-0 at the break. Kodama added another takedown to go up 6-0 before Yu scored a reversal, which she followed up with two consecutive gut wrenches to get within a point at 6-5. But Kodama would dominate the rest of the way, scoring nine consecutive points on her way to a technical superiority.

Japan's gold-medal run was halted by Yue ZHANG (CHN), who defeated Shion MASUYAMA (JPN) by fall in the finals at 65kg. The two wrestlers traded four-point moves in the opening period, and Zhang held a 5-4 lead at the break. With just under two minutes remaining in the match, Zhang threw Masuyama to her back and secured a fall.

Tsz CHANG (TPE) came from behind to win at 72kg. (Photo: Sachiko Hotaka)

At 72kg, Hui Tsz CHANG (TPE) came back to defeat Svetlana OKNAZAROVA (UZB) to earn the gold medal. Oknazarova took a 2-0 lead into the break after a first-period takedown. She added to her lead in the second period with another takedown to go up 4-0 before Chang turned the tables, scoring with an exposure and then a takedown to take the lead on criteria with just over a minute and 30 seconds remaining. She would then hang on for the narrow victory.

The freestyle competition at the Junior Asian Championships begins on Saturday. Action is set to begin at 10 a.m. local time. 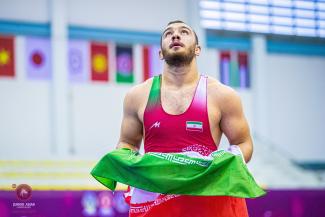