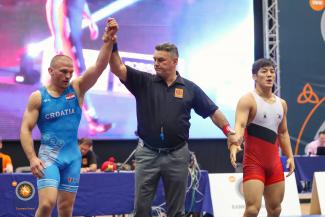 In their quarterfinals meeting on Saturday, Starcevic built a commanding 6-0 lead before Kim used an arm-spin to pick up his lone takedown, closing the deficit to 6-2. Starcevic somehow came away from Kim's arm-spin attempt with an exposure of his own and ultimately moved into the semifinals win an 8-2 victory.

Starcevic will wrestle Yunus BASAR (TUR) in tomorrow's 77kg gold-medal bout. Basar is one of four Turkish wrestlers who made it to Sunday night's Zagreb Open finals. Ekrem OZTURK, Kerem KAMAL, and Emrah KUS round out the other Turkish finalists.

Ozturk went undefeated in the round-robin competition and will wrestle Iran's 2017 junior world champion Poya Soulat DAD MARZ for the 55kg gold medal. Both wrestlers were 2-0 on the day.

Turkey's two-time junior world champion Kerem Kamal outscored his three opponents 26-3 and made it to his first career senior finals. His best finish prior to making Sunday's Zagreb Open finals came at the 2018 Dan Kolov - Nikola Petrov Tournament when he finished with a bronze medal.

Meanwhile, Uzbekistan tallied the second most finalists with three.

Though he didn't place at last year's world championships, Mihut did win last year's U23 and senior European championships, and also claimed titles at the Thor Masters, the Kristjan Palusalu Memorial, and the Ion Corneanu & Ladislau Simon Memorial.

At 130kg, Abdullaev scored huge back-to-back wins, giving Uzbekistan their third finalist. In the quarterfinals, Abdullaev scored a match-winning takedown with one minute left and knocked off 2017 world bronze medalist Yasmani ACOSTA FERNANDEZ (CHI), 2-2. He followed his quarterfinals win up by blasting U23 world silver medalist Osman YILDIRIM (TUR), 9-0 in the semifinals, setting up a finals date with Norway's Oskar MARVIK.

Meanwhile, Hungary and Bulgaria each had two finalists.

The final day of wrestling at the Zagreb Open, United World Wrestling first Greco-Roman Ranking Series Event, beings on Sunday at 10:30, with the finals beginning at 17:30 (local time).

Five "Must Watch" Matches from the Zagreb Open 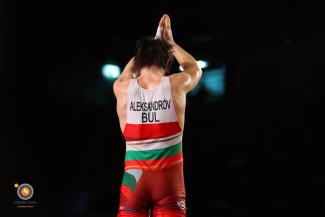 There were countless great matches that took place over the two days of wrestling at the first Greco-Roman Ranking Series event of the year, the Zageb Open, and we took the time to compile a list of the ten best matches with the most action and biggest storylines.

Aleksandrov trailed 7-0 after the first two minutes of action. He was dinged for passivity and thrown in the par terre position, where Kus grabbed four-points from a reverse lift and controlled the 5-0 advantage. Aleksandrov found himself down 7-0 after Kus grabbed another two for exposure, but got on the board with a step out point and trailed 7-1 heading into the second period.

The Bulgarian exploded for seven unanswered points in the closing three minutes and hung on to the one-point lead, knocking off the noticeably deflated returning world runner-up, 8-7.

Borisov grabbed the 1-0 lead after Milov was hit for passivity, then went to work in par terre, throwing Milov for four points and used a pair of gut wrenches to close out the 97kg gold-medal match with a 9-0 technical superiority victory.

In their quarterfinals meeting on Saturday, Starcevic built a commanding 6-0 lead before Kim used an arm-spin to pick up his lone takedown, closing the deficit to 6-2. Starcevic somehow came away from Kim's arm-spin attempt with an exposure of his own and locked up his semifinals win with an 8-2 victory.

The Uzbek nearly finished the job off and captured the 130kg gold medal but lost to Norway's Oskar MARVIK in the finals, 1-0.

87kg SEMIFINALS - This all-Hungary semifinals bout was one of the Zagreb Open's most important matches. The reason being, Viktor LORINCZ and Erik SZILVASSY are battling for Hungary's 2019 Astana World Championship spot.

In their Zagreb Open semifinal's meeting, Lorincz scored the critical 3-0 win over the U23 world champion and grabbed a leg up on his fellow Hungarian heading into the second Greco-Roman Ranking Series event, the Hungarian Grand Prix.

Lorincz went on to beat Sweden's Kristoffer BERG, 3-1 in the 87kg finals.