Showdown Between Long-Time Rivals Amri and Adenity Brewing at 62kg 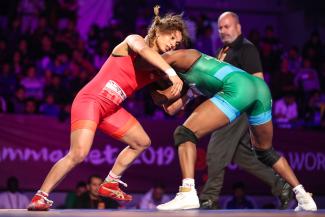 Armi has established herself as one of the greatest African women’s wrestlers ever and is looking to build on that legacy with a potential fourth Olympic berth. The Tunisian great made history in back-to-back years with a bronze-medal finish at the Rio Olympic Games and a silver medal at the ’17 World Championships. She became the first women’s wrestler from Africa to reach the podium at the Olympic Games, then became Africa’s first-ever world finalist.

But Amri’s road to a potential fourth Olympic Games will likely go through a pair of rising stars and the last African wrestler to beat her, Nigeria’s Adeniyi.

Since ’08, Amri has claimed 11/13 gold medals at African continental competitions and has only faced defeat on two occasions. She fell in the final of the ’08 African finals, but her latest loss came against Adeniyi in the opening round at the ’15 All African Games (4-1).

Since that loss, the pair of Rio Olympians have met for African gold in back-to-back years.

In the ’19 finals, Amri hit a sneaky counter-offensive dump in the opening period and pinned Adeniyi and won her tenth African gold. She claimed an 11th African title last year with another victory by fall over Adeniyi. The gold-medal match was scoreless after the first two minutes, but Amri caught Adeniyi off-balance with a single leg, then planted the Nigerian on her back for the fall.

Meanwhile, African rising stars and junior champs Amel HAMMICHE (ALG) and Zineb HASSOUNE (MAR) are also entered at 62kg. Last season, the Algerian made her fourth senior-level appearance and claimed a silver medal at the ’20 African Championships, while the African and Oceania Olympic Qualifier will be the Moroccan ’20 African junior champs second senior-level showing.

Wrestling at the Africa and Oceania Olympic Qualifier kicks off Friday (April 2-4) and can be followed live on www.uww.org.

HAMMAMET, Tunisia (May 9) --- On today’s show, Eric Olanowski recaps which ten nations secured at least one of the 36 Olympic quotas, Diamantino IUNA FAFE’S 🇬🇼 impressive 57kg gold-medal performance and how Tunisia 🇹🇳 secured a tournament-most 10 Olympic berths across all the three styles.