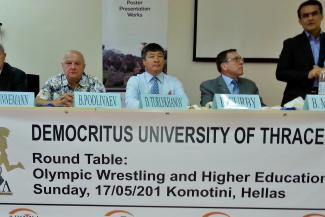 The Scientific Commission of United World Wrestling held their annual meeting during the International Forum of Olympic Wrestling in Ancient Olympia (GRE), May 14 and 15. The event, hosted by the Hellenic Wrestling Federation, helped to formulate a scientific program to focus on aspects of women’s wrestling. Appreciation must be given to the Hellenic Wrestling Federation for organizing this high quality program in such an historic and inspirational venue. The lectures and presentations from the Forum are available at the website of the International Network of Wrestling Researchers (www.inwr-wrestling.com).

Dr. Harold Tünnemann was presented with the newly crafted Raiko Petrov Memorial Lecture Award. Sponsored by the Bulgarian Wrestling Federation, this beautiful piece of art was not ready when Tünnemann gave his lecture in September in Tashkent.

The Scientific Forum was part of an International Tournament also being held at Olympia. The Opening Ceremonies were a play that depicted the Origins of Wrestling in Ancient Greece. It was produced under the guidance of Professors Christos Kollias and Charilaos Chondronasios and involved over 50 actors, musicians and athletes.

Following the International Forum in Olympia, the Scientific Commission travelled to Komotini to participate in the 23rd International Congress on Physical Education & Sport (ICPES) held at the Democritus University of Thrace. Here, the commission members took part in a special roundtable session entitled, Olympic Wrestling and Higher Education.

The full agenda of the Scientific Commission's annual forum. 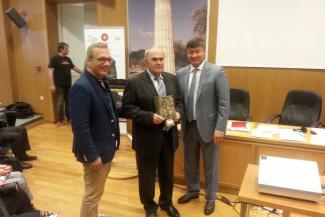