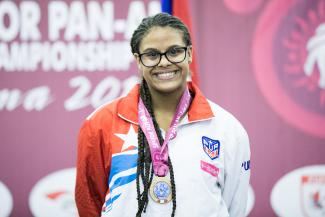 LIMA (May 4) – Puerto Rico earned its first female Pan American champion since 2002 on Friday night when Andribeth RIVERA picked up her third win of the day to secure the 59 kg gold.

Rivera faced Laurence BEAUREGARD (CAN) in her final match of round-robin competition. Beauregard stormed out to an 8-0 win but just moments later, Rivera threw the Canadian to her back and got the pin.

Rivera became just the second women’s freestyler to win a Pan Am title for Puerto Rico. The last to do it was Mabel Fonseca Ramirez, who won back-to-back championships in 2001 and 2002.

Leathers had locked up the gold medal in the morning session in round-robin competition.

Molinari defeated Breanne Leigh GRAHAM (CAN) with a 5-2 win in the only match of the day at 65 kg.

The other women’s champion came at 72 kg, when Veronica Helen Frances KEEFE (CAN) put together a perfect 3-0 record in the event.

Moving on with the USA theme, the U.S. men’s Greco team won the Pan Am team title, outscoring runner-up Cuba 141-140.

Although they won the team title, the U.S. did not produce any champions in day-two action. However, the squad leaves Peru with six medals, including two gold, three silver and one bronze.

Gregorich, who finished seventh at the World Championships, improved on a second-place finish from last year’s Pan Ams, taking the top of the podium with a dominant 7-0 decision over Yorgen Jose COVA PULIDO (VEN).

Emerging from the 82 kg bracket was Luis Eduardo AVENDANO ROJAS (VEN), who strung together a perfect 4-0 record. In his final match of the day, Avendano defeated Brayden William AMBO (CAN) by fall early in the match. 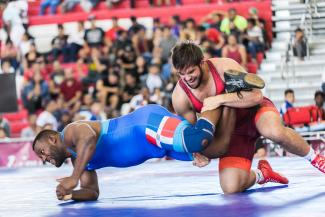 LIMA (May 6) – The top of the podium was flooded with wrestlers clad in red, white and blue all night as USA produced five men’s freestyle Pan American champions, while Cuba claimed the other three gold medals in the final night of competition at the 2018 Pan American Championships.

The two nations went head-to-head in four of the night’s finals, trading gold-medal wins to split them 2-2.

2012 Olympic bronze medalist and three-time World medalist Livan LOPEZ AZCUY (CUBA) gave his nation a win in the first Cuba/USA final of the night with a convincing 6-1 victory against Nazar KULCHYTSKYY (USA) in the 74 kg gold-medal match.

At 86 kg, Yarygin champion David TAYLOR (USA) outlasted two-time Pan Am champion Yudenny TORREBLANCA (CUB) in a 3-2 win. Torreblanca struck first with a takedown but it was not enough as Taylor scored a takedown of his own to close out the first period. A second-period step out sealed the win for the American.

Closing out the night in the 125 kg final was 2017 World bronze medalist Nick GWIAZDOWSKI (USA), who shut out two-time Pan Am silver medalist Yudenny ALPAJON ESTEVEZ (CUB) with a 9-0 performance.

For his efforts, Stieber was named the tournament’s outstanding wrestler.

Green, a 2017 World silver medalist and 2015 World bronze medalist, captured his second-consecutive Pan Am gold at 70 kg. In Sunday night’s finals, Green dominated Hernan GUZMAN IPUZ (COL) with a 10-0 victory. It was his second tech fall over the Colombian as the two met earlier in the day in pool action.

Joseph COLON (USA) also won a gold medal for the U.S. defeating Joshua Bodnarchuk of Canada in their second meeting of the day with a 10-0 technical fall.

Reineri ANDREU ORTEGA (CUB) won the first gold medal of the night for Cuba with first-period tech fall over Oscar TIGREROS URBANO (COL) in the 57 kg final. It was the Cuban’s second tech fall of day.

His day was highlighted by a 7-4 win over 2017 World silver medalist Thomas GILMAN (USA).

The USA ran away with the team title, scoring 230 points, which was 100 points more than runner-up Cuba. Taking home bronze in the team race was Canada with 123 points.