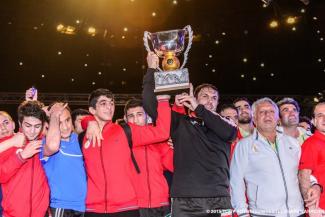 LOS ANGELES (April 12) – Anywhere Iran wrestles, the horns, the chants and the singing follows. Whether it be at World Championships in Turkey or World Cups in Los Angeles, Iran is regarded as having some of the most engaged wrestling fans in the world.

On Sunday at the Forum in Los Angeles, the pattern would hold as hundreds of Iranian wrestling fans waved flags, blew horns and sang as Iran would defeat the United States 5-3 to win the championship at the United World Wrestling Freestyle World Cup.

“We see more Iranians here in Los Angeles than any other City,” said Iranian 61kg wrestler Behnam EHSANPOOR. “The crowd helped me 100 percent. It’s like wrestling in Tehran.”

While tensions between the United States and Iran are strictly political, there have been epic battles between wrestlers from both nations throughout the course of history. The way things started and then finished on Sunday night, that list of epic battles grew. 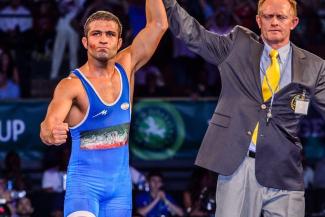 Iran’s Hassan RAHIMI gave his nation the first win of the finals with a tight 6-5 victory over Tony RAMOS at 57kg. The key sequence occurred in the second period where Ramos, trailing 2-1, looked to score a two-point takedown, then give up two points on a roll and then settled back on top for two more exposure points. After a challenge and a review, Ramos trailed 5-3 after losing a point for the lost challenge. Rahimi gave up a caution point to cut his lead to 5-4. Rahimi scored a pushout countering a Ramos attack to extend his lead to 6-4 and held on despite some question marks surrounding the finish of the bout.

The U.S. looked to steal one quickly at 61kg as 2012 Olympic bronze medalist Coleman SCOTT jumped out to a 5-0 lead against Iran’s Behnam EHSANPOOR, but the Iranian persevered. Trailing 7-2, the 18th-ranked Ehsanpoor closed the gap with takedowns and exposure points. Ehsanpoor completed the comeback with a single leg takedown with 17 seconds left in the second period, sending the Iranian fanbase into boisterous applause.

“It was good wrestling,” said Ehsanpoor. “Scott is an Olympian and I really, really worked hard to get here. The biggest help during the match was the tips my coach gave me. He was watching and made important tips to me on how to change my wrestling.  The coaching was important and made the difference.” 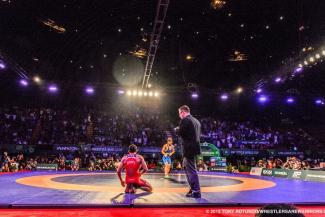 Brent METCALF gave the United States its first win with a 3-1 victory at 65kg over World No.2 (at 61kg) Masoud ESMAILPOUR. Metcalf converted a takedown midway through the first period, but Esmailpour, last year’s World silver medalist at 61kg, was unable to muster any offense.

Iran would take a key swing match at 70kg as World No.10 Hassan YAZDANI would show keen mat awareness to defeat No. 11 Nick MARABLE 3-1. Marable came close to scoring a tying takedown in the final minute, but Yazadani’s flexibility allowed him to defend as Marable feverishly tried to drop one of Yazdani’s knees to the mat for the tying score. Yazdani fought off the attack and prevailed to give Iran a 3-1 lead after four weights.

Iran’s Morteza REZAEI had defeated two World medallists already in the tournament, but with World No.2 Jordan BURROUGHS of the United States looming, Rezaei would have to wrestle a perfect match. Burroughs wasn’t going to allow that.

Burroughs struck in the first 10 seconds with a takedown and then scored a two-point exposure and three additional takedowns to earn a 10-0 technical fall to run his international record to 102-2 and bring the U.S. within 3-2 after the first five matches. 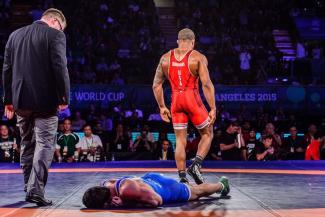 Foster, ranked No.10 in the world, struck first with a takedown, but MOSTAFA JOUKAR came right back with a big four-point move 30 seconds later. The Iranian would lift and return the American again in the first period for another four points, building an 8-2 lead after 120 seconds of wrestling. Mostafa Joukar would use the same single leg attack to score a pushout to extend his lead to 10-2 after a pair of pushouts. Mostafa Joukar would finish off Foster with another single leg, but he’d double off for two points and earn the 12-2 technical fall and give Iran a 4-2 lead with two bouts remaining.

After an up-and-down performance all weekend, 2012 Olympic champion Jake VARNER (USA) picked the last three seconds to strike and steal a victory away from 2014 World bronze medalist Mohammad HOSSEIN MOHAMMADIAN. Varner led 1-0 after scoring a caution point in the first period for Mohammadian, normally an 86kg wrestler, failing to score on his 30-second shot clock. Mohammadian scored a takedown and a pushout in the second period to take a 3-1 lead before Varner hit a duckunder and converted the takedown attempt with just four seconds remaining to earn a 3-3 criteria victory and send championship down to the event’s last match. 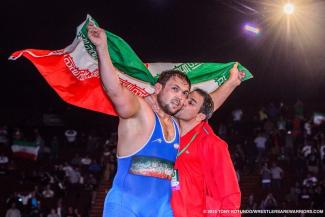 World and Olympic medalist Khomeil GHASEMI (IRI) stepped to the mat at 125kg to try to bring the World Cup title back to Iran. He’d face off with World No.15 Zach REY of the United States.

Rey took a 1-0 lead, scoring a caution point after Ghasemi was unable to score during the 30-second shot clock window in the first period. Ghasemi would match Rey’s caution point in the second and would hold criteria as the two were tied 1-1 with a minute remaining in the bout. Ghasemi scored a pivotal takedown with 25 seconds remaining in the match, countering a Rey attempt with a go-behind. After a restart, Ghasemi prevented any Rey attack to give Iran the 5-3 team victory.

Both the U.S. and Iran won their respective pools. Iran won what was essentially a pool final on Sunday afternoon 7-1 over rival Azerbaijan. Iran jumped out to a 6-0 lead before dropping the only match of the dual. Sharif SHARIFOV (AZE) would lay a 9-1 loss on two-time world champion Reza YAZDANI at 97kg.

Azerbaijan, which has become a world power in wrestling the past decade, has strong ties to Iran and the two nations have developed a fierce rivalry on the mat in both freestyle and Greco-Roman wrestling.

One of the key victories came from World No.2 Sayed MOHAMMADI (IRI) at 65kg. Mohammadi had a wild 14-10 victory over 2012 Olympic champion Toghrul ASGAROV (AZE), who was wrestling down at 65kg for the first time in a year.

“I managed to win due to the tough training we do in Iran,” said Mohammadi. “We prepare for a day like this.”

Coming into the finals, Mohammadi wasn’t worried about his individual outcomes.

“The performance is not about me, it’s about the team,” he said. “I’m happy that I played my role on the team.”

Azerbaijan topped Russia by criteria for third place. The two teams were deadlocked at 4-4 and classifcation points were tied at 15-15 sending the match to technical points, which Azerbaijan won 34-28. 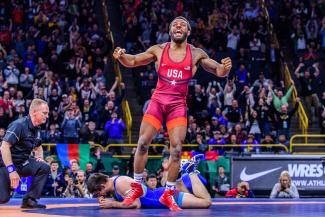 UWW announced the host of the three World Cups after a Bureau meeting held at its headquarters in Switzerland. The Bureau approved the combined World Cup for '22 and '23 in the USA, while the 2022 Greco-Roman World Cup was provisionally awarded to Baku, Azerbaijan pending a venue inspection visit.

UWW President Nenad LALOVIC said that the organization continues to progress with a dynamic host city process and the 2022 calendar is something the fans can look forward to.

“We are pleased to finalize the 2022 calendar and looking forward to high-level events with elite competition,” Lalovic said. "We continue to progress the sport with a dynamic host city process which works with organizers in a partnership approach.

"The 4 ranking Series events, Continental Championships, a World Championships in Belgrade, and an updated World Cup format will certainly be moments to look forward to in 2022.”

The '22 World Cup in Iowa is scheduled for December 10-11, while the '23 competition will take place December 9-10. The Greco-Roman World Cup in Baku is slated for November 5-6.

"USA Wrestling is excited to once again bring one of the most important wrestling competitions on the planet to the Coralville/Iowa City community, which is truly an international wrestling hotbed," Rich Bender, USA Wrestling Executive Director, said. "We are extremely pleased that we will be able to showcase the world's best men's and women's freestyle wrestlers in the same location. The atmosphere will be electric and fans will not want to miss this action."

The '22 World Cups, and moving forward, will be held in an updated format from earlier editions. The top five teams from the World Championships earn an invitation to the tournament. In addition, United World Wrestling will comprise the sixth team with the remaining wrestlers who participated in the World Championships.

USA Wrestling has hosted the men's freestyle World Cup 30 times in the past -- the most for any nation. Coralville, Iowa, will become the 10th USA city to host the tournament.

The Bureau provisionally approved Baku, Azerbaijan as the Greco-Roman World Cup host pending a venue inspection visit. The tournament will be held on November 5-6.

If approved, the Greco-Roman World Cup will return to UWW's calendar after five years, when Abadan City, Iran, hosted the competition in 2017.

Furthermore, Baku will return to the UWW's event calendar after a long absence. Apart from the Golden Grand Prix final, Baku last hosted a UWW event back in 2012 – the Cadet World Championships.