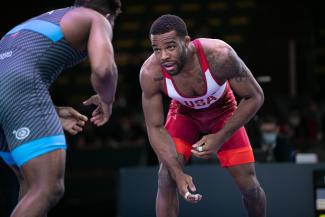 OSLO (October 3) -- More freestyle superstars will be in action on day two of the senior World Championships in Oslo, Norway. Jordan BURROUGHS (USA) and J'den COX (USA) will try claim the gold medals while Tokyo bronze medalist Thomas GILMAN (USA) will be a big threat at 57kg. Zagir SHAKIEV (RWF) is the favourite at 65kg. If you missed day one action, here's the wrap -- Hassan Yazdani and David Taylor set up 86kg final

Another exciting morning session in the books. Iran has four in the semifinals while USA managed to get three wrestlers. Russian Wrestling Federation will be disappointed with only two wrestlers in the semifinals.

1350: We finish out the session with Jordan BURROUGHS (USA) winning his bout 9-4 against Radik VALIEV (RWF) to make the semifinal at 79kg. Can he win his fifth world title?

1345: Ryuki YOSHIDA (JPN) manages to hang on for a 4-4 win over Ashraf ASHIROV (AZE) while Nika KENTCHADZE (GEO) rolls through with a 9-5 win over Georgios KOUGIOUMTSIDIS (GRE).

1340: Four out of four for Iran! Mohammad NOKHODILARIMI (IRI) gets a 11-0 win over Saifedine ALEKMA (FRA) and advances to the semifinals.

1330: Zagir SHAKHIEV (RWF) is swift. He moves on to the semifinals with a 10-0 win over Selahattin KILICSALLAYAN (TUR). Tokyo Olympian Tulga TUMUR OCHIR (MGL) gets the better of Vazgen TEVANYAN (ARM) 2-1 to move into the semifinals. Iran continue to dominate and now Amirmohammad YAZDANI (IRI) wins his quarterfinal 4-2 against Krzysztof BIENKOWSKI (POL). In an upset on Mat A, Alibek OSMONOV (KGZ) beats Vasyl SHUPTAR (UKR) 5-3 and reach the semifinals

At 65kg, on Mat A will be Vasyl SHUPTAR (UKR) vs Alibek OSMONOV (KGZ), Krzysztof BIENKOWSKI (POL) vs Amirmohammad YAZDANI (IRI) on Mat B, Zagir SHAKHIEV (RWF) vs Selahattin KILICSALLAYAN (TUR) on Mat C and Vazgen TEVANYAN (ARM) vs Tulga TUMUR OCHIR (MGL) on Mat D

1322: Kamran GHASEMPOUR (IRI) is unstoppable. He wins 10-1 against Irakli MTSITURI (GEO) to move into the semifinals. In the final quarterfinal, Osman NURMAGOMEDOV (AZE) gets a 7-3 win against Zbigniew BARANOWSKI (POL).

1315: J'den COX (USA) has no trouble in beating Jeremy POIRIER (CAN) 10-0 and he will move into the 92 semifinals. A similar story for Magomed KURBANOV (RWF) as he gets past Amarhajy MAHAMEDAU (BLR) 9-0

Moving on the 92kg quarterfinals, Magomed KURBANOV (RWF) vs Amarhajy MAHAMEDAU (BLR) on Mat A, Irakli MTSITURI (GEO) vs Kamran GHASEMPOUR (IRI) on Mat B, Jeremy POIRIER (CAN) is wrestling J'den COX (USA) on Mat C and Zbigniew BARANOWSKI (POL) is up against Osman NURMAGOMEDOV (AZE) on Mat D

1305: Thomas GILMAN (USA) moves into the semifinals with a 11-1 win over Vladimir EGOROV (MKD). On Mat B, Alireza SARLAK (IRI) manages to comeback from 2-6 down and win a 7-6 bout against Aryan TSIUTRYN (BLR) and move on to semifinals

1240: A no show from Bolat SAKAYEV (KAZ) and Jordan BURROUGHS (USA) will move on to the quarterfinals at 79kg with a walkover

1230: Yianni DIAKOMIHALIS (USA) is up on mat C against Vazgen TEVANYAN (ARM) for their pre-quarterfinal at 65kg. Tevanyan gets a stepout and lead 1-0 at the break. Diakomihalis shoots again but it's Tevanyan gets the counter for a takedown and lead 3-0. Once again Tenvanyan manages to drag Diakomihalis out and get two for 5-0. A consolation point for the American but he will drop the bout 5-1.

1200: Suleyman ATLI (TUR) does it in style! He gets a 10-0 win over PANKAJ (IND) and will face junior world champion Toshiya ABE (JPN) in the quarterfinal

1110: Amirmohammad YAZDANI (IRI) is wrestling Gabriel JANATSCH (AUT) on mat B and to the delight of the crowd, he gets a takedown with a with gut and leads 4-0. Exposure to gut in the next sequence and he is a 10-0 win at 65kg

1100: Two-time defending world champion at 92kg J'den COX (USA) begins his title defence against Orgilokh DAGVADORJ (MGL). He has build a 3-0 lead with a takedown and step out but Dagvadorj manages a takedown as well. It's 3-2 now. Another takedown from Cox to make it 5-2 at the break. Double leg and two guts for Cox and he leads 11-2 now. He will finish with another takedown and win 13-2

1045: Two-time World Championships bronze medalist Bekhbayar ERDENEBAT (MGL) is wrestling Meirambek KARTBAY (KAZ). He is lead 9-5 with a minute to go in the bout. He wins 10-5

1015: Welcome to day two of the senior World Championships in Oslo, Norway. Here's a preview to all the four weight classes that are in action. Day 2 Preview

What's the driving force behind Vlasov's attempt to win a third Olympic title?

CORSIER-SUR-VEVEY, Switzerland (December 9) -- Roman VLASOV (RWF) was denied a chance to go for a third Olympic gold earlier this year, but made sure he would not miss out on his shot at winning a third world title.

Vlasov chalked up a meticulous and hard-fought 2-1 victory over ‘20 European champion Sanan SULEYMANOV (AZE) to take the 77kg at October’s World Championships in Oslo.

"I was super tired, I couldn't even celebrate as I usually do," Vlasov said. "I left all my power and energy on the mat."

Prior to the Tokyo snub, Vlasov considered ending his career. But the desire to achieve his dream of matching the legendary Alexander KARELIN (RWF) with three Olympic golds inspired him to reset his sights for the 2024 Paris Olympics. Like his hero and son’s god father, Karelin, Vlasov is a native of Novosibirsk in southwestern Siberia and was mentored by the great coach Viktor KUZNETSOV.

Oslo would be the first stop on the long road to Paris, as it would provide confirmation that he could live up to his own expectations. A world champion in 2011 and 2015, he finished out of the medals in 2017 and 2019.

"The last time I won the World Championships was in 2015, before in 2011. It’s been a long time," Vlasov said. "I missed these emotions. To be the best in the world is the thing I’ve been dreaming about. It’s the thing I think about when I wake up in the morning before going to training."

After barreling through the rounds, winning each of his four matches by at least seven points, Vlasov found a formidable foe in Suleymanov, this year's European bronze medalist and the ‘19 U23 world silver medalist.

Vlasov, a four-time European champion who turned 31 in Oslo, had the first chance in par terre, but could only get a 1-point stepout after walking the airborne Suleymanov over the edge.

But Suleymanov had no answer when the roles were reversed in the second period, and Vlasov clinched the win when he deftly evaded a stepout attempt in the final 20 seconds.

"The final match did not go as planned," Vlasov said. "I had to wrestle super hard to keep that one point scored. Patience brought the gold."

Patience and appreciation of each victory along the way are what will look to get him to the Paris Games, a lesson he learned from the Tokyo debacle.

"The last Olympic cycle I made the mistake of counting down the days to the Olympics," Vlasov said. "This time I just enjoy every title. Today I am the happiest man on Earth, tomorrow we’ll be the new day, the new qualification for the new world championships. "The Olympics are the dream of every athlete. I’ve been there twice, and I want to become a three-time Olympic champion. But it’s better not to go ahead of time."