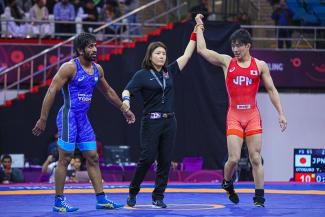 The rivalries are back in action as freestyle actions begins in Almaty. Bajrang PUNIA (IND) and Takuto OTOGURO (JPN) are the biggest superstars in action

1410 hrs: Sirojiddin KHASANOV (UZB) will wrestle for a gold medal at 70kg against Syrbaz TALGAT (KAZ)

1355 hrs: We have a rematch! Bajrang PUNIA (IND) and Takuto OTOGURO (JPN) will redo the final of 65kg after they did that in New Delhi last year. Otoguro came out on top last year

1315 hrs: Narsingh Pancham YADAV (IND) will go up against Byungmin GONG (KOR) in the 79kg semifinal but it's the other one which should be a top match.  Galymzhan USSERBAYEV (KAZ) takes on Ali Bakhtiar SAVADKOUHI (IRI)

In the 97kg weight category, Altangerel CHINBAT (MGL) will be up against Alisher YERGALI (KAZ) while the other semifinal will see Ali Khalil SHABANIBENGAR (IRI) wrestling Satywart KADIAN (IND)

1310 hrs: We are moving closer to the the semifinals! At 57kg, Ravi KUMAR (IND) will wrestle Ali M M ABURUMAILA (PLE) while the second semifinal will see Alireza Nosratolah SARLAK (IRI) take on Yuto TAKESHITA (JPN)

1250 hrs: Two minutes and 10 seconds is all Takuto OTOGURO (JPN) needs to win 13-0 against Nodir RAKHIMOV (UZB) and move into the semifinal of his title defence at 65kg

1235 hrs: Ravi KUMAR (IND) begins his title defence at 57kg with a dominant 9-2 win over Nodirjon SAFAROV (UZB) in the quarterfinal

1215 hrs:  Amirhossein Ali HOSSEINI (IRI) and Hikmatullo VOHIDOV (TJK), both silver medalist in their respective weights in Delhi last year are on Mat B and Mat C respectively

1200 hrs: Defending champion at 79kg Galymzhan USSERBAYEV (KAZ) rallies back from 1-4 down to win his qualification round bout 13-4 against Gurbanmyrat OVEZBERDIYEV (TKM)

1130 hrs: The whistle are off! Almaty is ready for men's freestyle action. Many star wrestlers to claim the five gold medals on offer