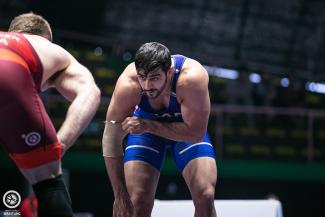 We have our 12 qualifiers in men's freestyle from Almaty. Uzbekistan was the top team with four qualifiers while Iran captured three spots for the Tokyo Olympics. China managed two for itself as Kyrgyzstan, Mongolia and Kazakhstan go home with one each.

1945 hrs: Yusup BATIRMURZAEV (KAZ) is the champion of 125kg as he beats Lkhagvagerel MUNKHTUR (MGL) 4-2 in the final

1900 hrs: We have injury forfeit at the 74kg final and Yones Aliakbar EMAMICHOGHAEI (IRI) will take home the gold medal. Bekzod ABDURAKHMONOV (UZB) finishes with a silver

1835 hrs: What a match! - Amirmohammad Babak YAZDANICHERATI (IRI) was leading 12-8 after a too and fro five minutes but Ernazar AKMATALIEV (KGZ) comes back to get two exposures and make it 12-12 and claim the gold medal at 65kg. Iran is challenging. But Akmataliev will win the gold medal after a revised score of 15-12

1800 hrs: Welcome back! We are ready for our medal bouts. First up will be the 57kg bronze medal bouts

1310 hrs: Liu with a pair of takedowns and he is up 4-1 but Ikromov counters with his own. Liu gets an exposure and he will win 6-3. Abdullaev will qualify Uzbekistan for Tokyo as he beats Uulu 8-4

1215 hrs: There will be a 45 minute break before we start the semifinals! 12 wrestlers will qualify for the Tokyo Olympics

1150 hrs: Kazakhstan are having a field day! Azamat DAULETBEKOV and Yusup BATIRMURZAEV have reached the semifinals at 97kg and 125kg respectively

1110 hrs: Haji ALI (BRN) is tied 1-1 against Junsik YUN (KOR) in their 65kg quarter-final. On Mat B after this bout we will have the Amirmohammad Babak YAZDANICHERATI (IRI)

1055 hrs: Mohammadhossein Askari MOHAMMADIAN (IRI) begins with a 11-0 win against Naoya AKAGUMA (JPN). He looks poised to get that quota for Iran

1030 hrs: Off we go! Freestyle wrestling here in Almaty and we have some superstars to watch Ilyas BEKBULATOV (UZB), Mohammadhossein Askari MOHAMMADIAN (IRI), Haji ALI (BHN)