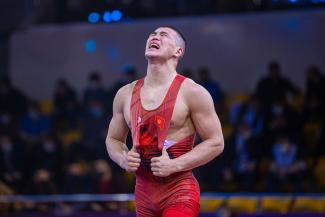 Kyrgyzstan led the way with three wrestlers qualifying for the Tokyo Olympic Games at tge Asian Olympic Qualifiers in Almaty on Friday. China, Iran, and South Korea qualified two each while Japan, Kazakhstan and Uzbekistan managed to get one spot each.

2000 hrs: GOLD MEDAL! Muminjon ABDULLAEV (UZB) claims the 130kg gold medal after Minseok KIM (KOR) after the Korean pulls out due to injury

1940 hrs: Mohammadhadi Abdollah SARAVI (IRI) caps off his day with a stunning 10-0 win over Uzur DZHUZUPBEKOV (KGZ) to win the gold medal at 97kg. Second gold of the day for Iran

1920 hrs: GOLD MEDAL! TURSYNOV (KAZ) will capture the gold medal at 87kg after Fei PENG (CHN) is out injured

1900 hrs: GOLD MEDAL! Akzhol MAKHMUDOV (KGZ) finishes his day with a 7-3 win over Shohei YABIKU (JPN) and takes home the gold medal at 77kg. What a day for the youngster

1833 hrs: Aram VARDANYAN (UZB) captures the bronze medal by defeating Azatjan ACHILOV (TKM) 11-2 while ASHU (IND) is the winner on Mat B as he beats Sheroz OCHILOV (TJK) 8-1 at 67kg

1825 hrs: Azatjan ACHILOV (TKM) and Aram VARDANYAN (UZB) are wrestling on Mat A while Sheroz OCHILOV (TJK) is up against ASHU (IND) on Mat B at 67kg

1810 hrs: Hanjae CHUNG (KOR) with a reversal in the final 10 seconds to win the bronze medal over GYANENDER (IND) 4-3. Firuz MIRZORAJBNOV (TJK) fights off a tough battle against F Kh M J ALAJMI (KUW) 4-2 to win the bronze at 60kg

1800 hrs: Mohammad F Kh M J ALAJMI (KUW) and Firuz MIRZORAJABOV (TJK) will wrestle for the bronze medal on Mat A while Hanjae CHUNG (KOR) is wrestling GYANENDER (IND) for the second bronze medal at 60kg

1755 hrs: We are five minutes away from the medal bouts in Almaty. Here's the match order

The #WrestleAlmaty medal matches get underway in ten minutes.

1430 hrs: Here are the 12 Tokyo Olympics qualified wrestlers in Greco-Roman from Almaty

1300 hrs: We are underway with the semi-finals in Almaty. First up is the 60kg weight category

1255 hrs: We are a few moments away from the semi-final bouts in Almaty. The winners of those bouts will qualify their countries for the Tokyo Games

1215 hrs: Massive four! Kazakhstan's Nursultan TURSYNOV was trailing 1-3 but comes up with a big four pointer to defeat Masato SUMI (JPN) 5-3 and advance to the semi-final at 87kg

We need to come up with a good nickname for Mohammadreza GERAEI ??!

1200 hrs: Asikeev leading Vardanyan 1-0 at the break in the 67kg quarter-final. Big four-point throw from Vardanyan to lead 4-1

1120 hrs: Upset on Mat B! Marlen ASIKEEV (KGZ) defeats World bronze medalist and Asian silver medalist Meiirzhan SHERMAKHANBET (KAZ) 8-2 and that will be the end of the Olympic dream here for the Kazak wrestler. Some good tactical wrestling from Asikeev giving up little to nothing

1100 hrs: And we are off! All three mats begin the action with 130kg weight category