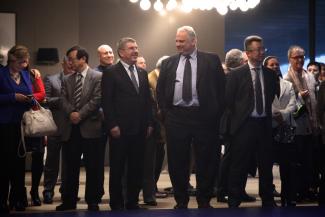 Equality was achieved following a proposal by United World Wrestling (UWW) to reallocate 18 quota places from men to women, which was approved today by the EB.

IOC President Thomas Bach said: “This is an excellent step forward. We are working with the International Federations at every stage to make the Youth Olympic Games appealing to young people, and now with their support we have made history - to have equal numbers of women and men competing for the first time at an Olympic Games or Youth Olympic Games. As well as being another big step in the implementation of Olympic Agenda 2020, this is a great milestone for women’s sport and for the Olympic Movement as a whole and we thank the UWW and its President, Nenad Lalovic, for helping us achieve this.”

Gender equality and innovation are key principles contained in Olympic Agenda 2020, the IOC’s strategic roadmap for the future of the Olympic Movement. Today’s news comes just weeks after the approval of the innovative event programme for the Youth Olympic Games Buenos Aires 2018, which will include new youth-oriented events such as BMX freestyle, kiteboarding, beach handball and cross- country running, and record numbers of female and mixed events. These innovations are also fully aligned with the Buenos Aires 2018 vision of delivering the most unique and youth-appealing Youth Olympic Games to date.