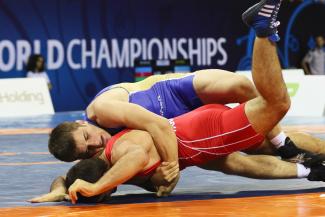 But, a battle may be brewing for the Greco-Roman team title as challengers Azerbaijan have advanced three wrestlers to the gold medal finals along with two more in the bronze medal matches at the Tbilisi Sports Palace. 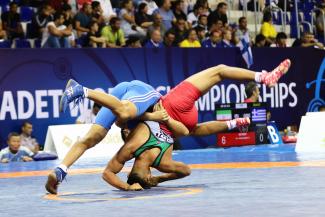 Iran, meanwhile, leads off with its Asian champion Omid Hossein ARAMI (IRI) in the gold medal match at 42kg and then follows with four wrestlers in the bronze medal finals, including twin brothers Hossein Jahanbakhsh and Hasan Jahanbakhsh FOROUZADEH at 76kg and 85kg.

Turkey also has a mathematical chance to claim the team title with four wrestlers in the bronze medal matches. 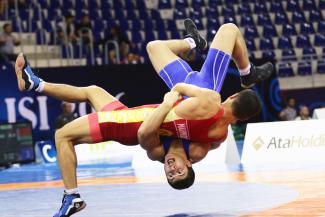 At 46kg, the first of Azerbaijan’s gold medal hopefuls Fail ISKANDAROV (AZE) takes to the mat against Asian runner-up Elbek ERGASHEV (UZB). Iskandarov, who finished seventh at the European meet in July, rolled over Asia champion Mohammad MEHRABI (IRI) by technical fall in the semifinals.

World and European bronze medal winner Ulvu GANIZADE (AZE) picked his way through the field at 69kg with wins over Iran and Turkey and will meet two-time Asian champion Akzhol MAKHMUDOV (KGZ) for the gold medal.

Makhmudov pinned European champion Malkhas AMOYAN (ARM) at 2:19 in the round of 16 and rolled over fellow European bronze medalist Artem VALASKOVICH (BLR), 8-0, in the semifinals.

Taking on Nasir HASANOV (AZE) at 76kg, Komarov tries for his second cadet world title after winning the 69kg crown in 2015. 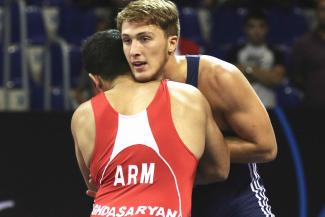 In the Greco-Roman finale, Markus RAGGINGER (AUT), who fell to Komarov in the European final, seeks to win his first major cadet title at 85kg after silver medals at the 2015 world meet in Sarajevo and at the European championships in Stockholm.

Ragginger will take on Alex SZOKE (HUN), who finished 13th in Stockholm, but edged Asian champ Hasan Forouzadeh, 1-0, in the semifinals. 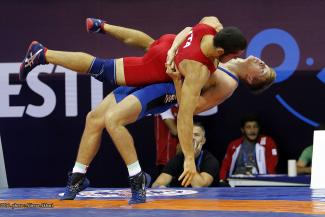