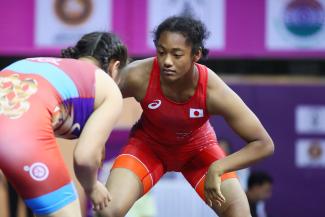 With their seven gold medals, Japan one-upped the Greco-Roman team champions, Iran. During the Greco-Roam portion of the tournament, nine Iranian wrestlers qualified for the gold-medal bout, but “only” six clutched a gold medal after it was all said and done.

Every Japanese wrestler who laced up their shoes today made the finals, bringing their tournament finalist total to eight wrestlers. Of the eight wrestlers to make the finals, seven departed the I.G. Sports Complex necklacing a gold medal. Japan followed up their two opening day gold medal technical superiority victories by wrapping up an additional three finals match-ups by greater than ten points.

Their seven women’s wrestling gold medals is an extreme improvement from last year’s Asian Junior Championships in Taichung, Taipei where all four Japanese wrestlers who made the finals finished with a silver medal.

Of those four finals losses, two of them came against Chinese opponents. This year, Japan turned the ship around, outscoring Chinese wrestlers 37-2 in their four head-to-head final match-ups.

China, who had five wrestlers fall in the finals finished in second place with 168 points. India, the host nation, claimed five individual medals and hoisted the third-place team trophy.