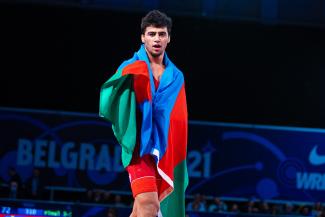 BELGRADE, Serbia (November 3) – As a kid, Hasrat JAFAROV (AZE) imagined becoming a world champion for Azerbaijan like many greats from the country. But growing up in a small district of Goranboy, Azerbaijan, it was difficult to find heroes to look up to. But he still followed his elder brother to the wrestling gym and slowly fell in love with the sport.

A decade after he first stepped into a wrestling gym, Jafarov has not only fulfilled the dream of winning a world title, he has won two in three months.

The 19-year-old stunned the field at 67kg weight class at the U23 World Championships, adding to his junior world title which he won in August in Ufa, Russia.

"I am glad that I became a world champion for the second time," Jafarov said. "I'll train even better to achieve good results in the senior age group."

Russia won the Greco-Roman team title, thanks to the two gold medals on Wednesday, which propelled them to 190 points. Iran finished second with 155 points, while Georgia ended up on the podium in third place with 105 points.

Jafarov, who turned 19-years-old on October 5, outscored Rezaei by scoring the match deciding two-point correct throw in the second period and holding onto the one-point win.

But even with his loss in the 67kg, Rezaei's 20-point second-place finish helped Iran (135 points) regain the five-point lead over Russia (130 points) after the night's first two weight classes.

Despite his win, the Azerbaijan youngster, who hails from a small village of Goranboy district, realized that moving forward, his opponents will study him more and find new ways to stop him from winning.

"Each medal brings more responsibility," he said. "My opponents know my par terre techniques, my standing position wrestling style. I will try to improve in the future so that it's not that tough for me to win." 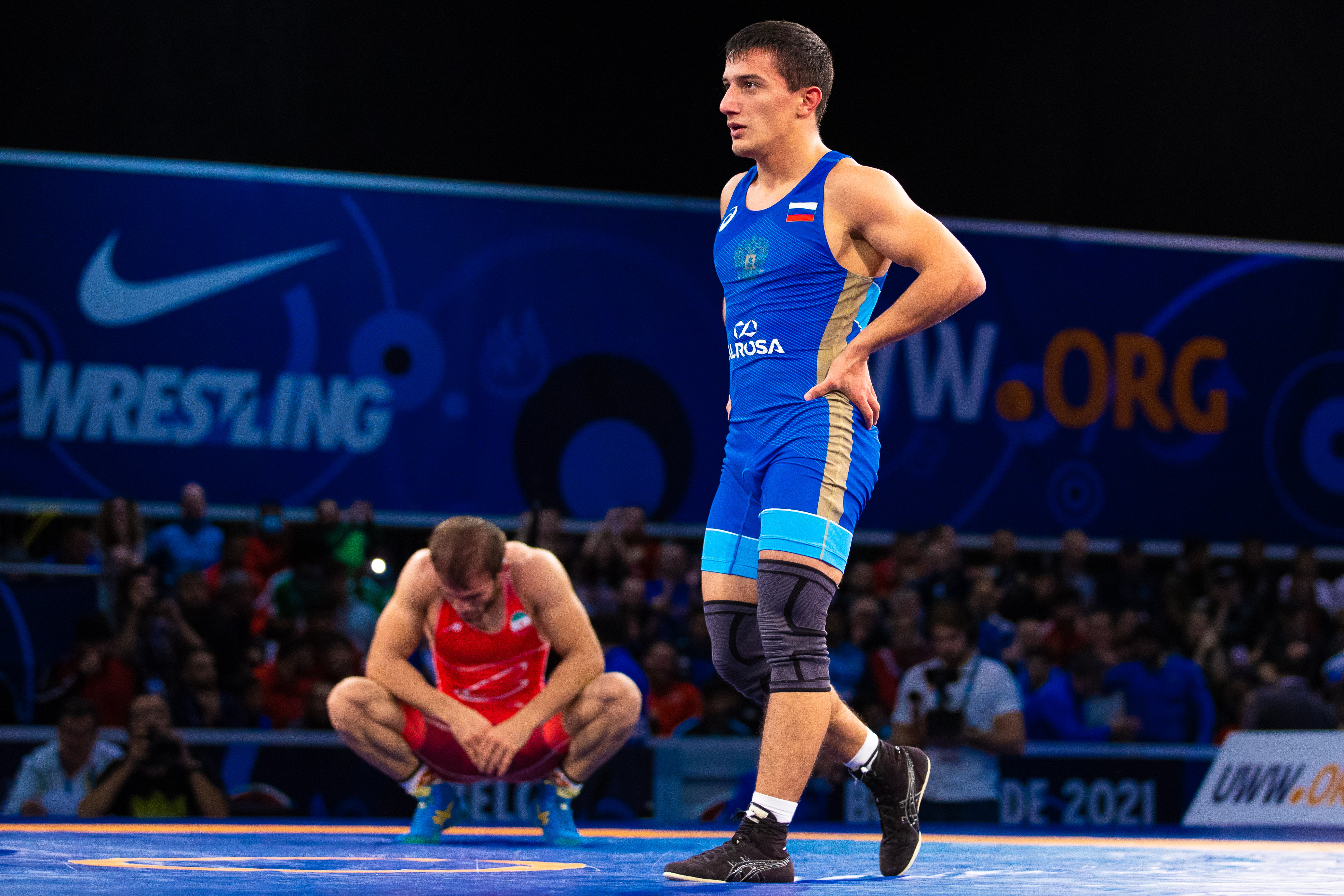 In other action, Iran narrowly led Russia by five points coming into the 60kg final, but Anvar ALLAKHIAROV (RUS) knotted up the team score at 115 points after he used a seven-point second period to ease his way past Mehdi MOHSEN NEJAD (IRI).

Allakhiarov fell behind 1-0 after the opening four minutes but never showed signs of panic. Instead, he remained poised in the second period and capitalized on his opportunity to put points on the board.

The Russian wrestler came out front with a back-breaking four-point lift after his Iranian opponent was hit for inactivity and gained the 5-1 advantage. He kept the action flowing and picked up two more points with an overhook throw that resulted in an exposure.

Allakhiarov ultimately held on to win 7-1 and handed Russia their third Greco-Roman gold medal of the '21 U23 World Championships. 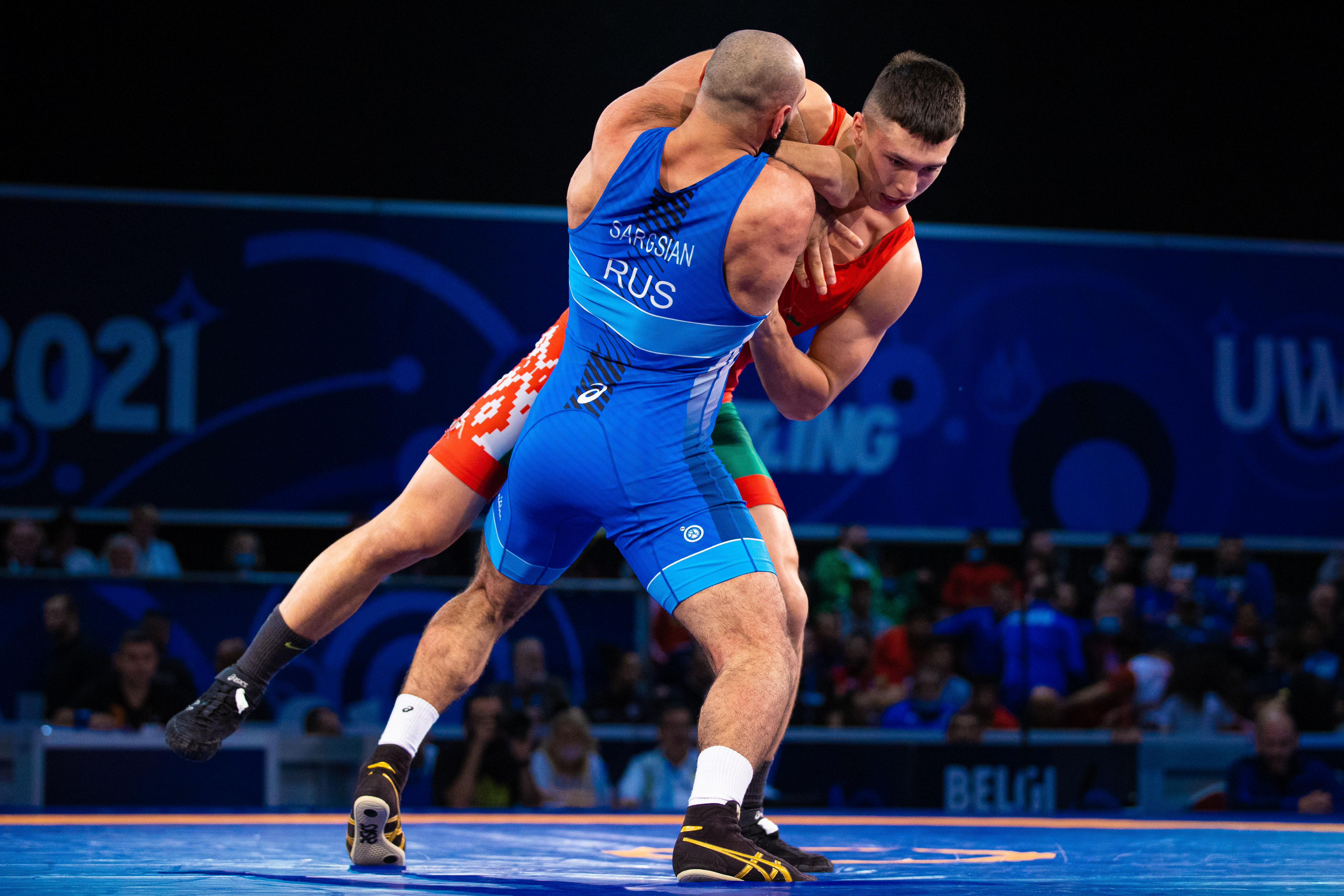 A fourth was added by the calm and composed Artur SARGSIAN (RUS) at 97kg. He closed out the Greco-Roman side of the competition with an overpowering 9-0 win over Pavel HLINCHUK (BLR). After earning the first-period inactivity point, the Russian turned the Belarusian twice and scored a four-point lift to win the match, 9-0.

"It was my sixth World Championships," Sargsian said. "The first gold medal was in 2015, and in my fifth try, I could win it again. I was ready to do everything to win the gold medal."

Sargsian is quickly becoming one of the most dynamic Greco-Roman wrestlers around the world, and Wednesday was further proof of it when easily lifted Hlinchuk for the throw. He was in danger after landing on his back for a split second but quickly redeemed himself to clinch the win.

"I can hide my emotions inside but we all worry a lot," he said. "I came here only for the gold and nothing else. I came to show my wrestling."

As he continues to grow as a wrestler and try to find his place on the senior Russian team, he will have to go through Tokyo Olympic champion Musa EVLOEV (RUS).

"He [Evloev] has a little injury, but soon he will be back on the mat," he said. "We will have the Russian Nationals soon, and we will wrestle and see."

The 23-year-old Oslo bronze medalist was also thankful to two-time Olympic champion Roman VLASOV (RUS) to be in the arena to support the Russian team.

"After my final match, I talked to the captain of our team Vlasov, he congratulated me," he said. "It's nice to have such attention. This support is really important." 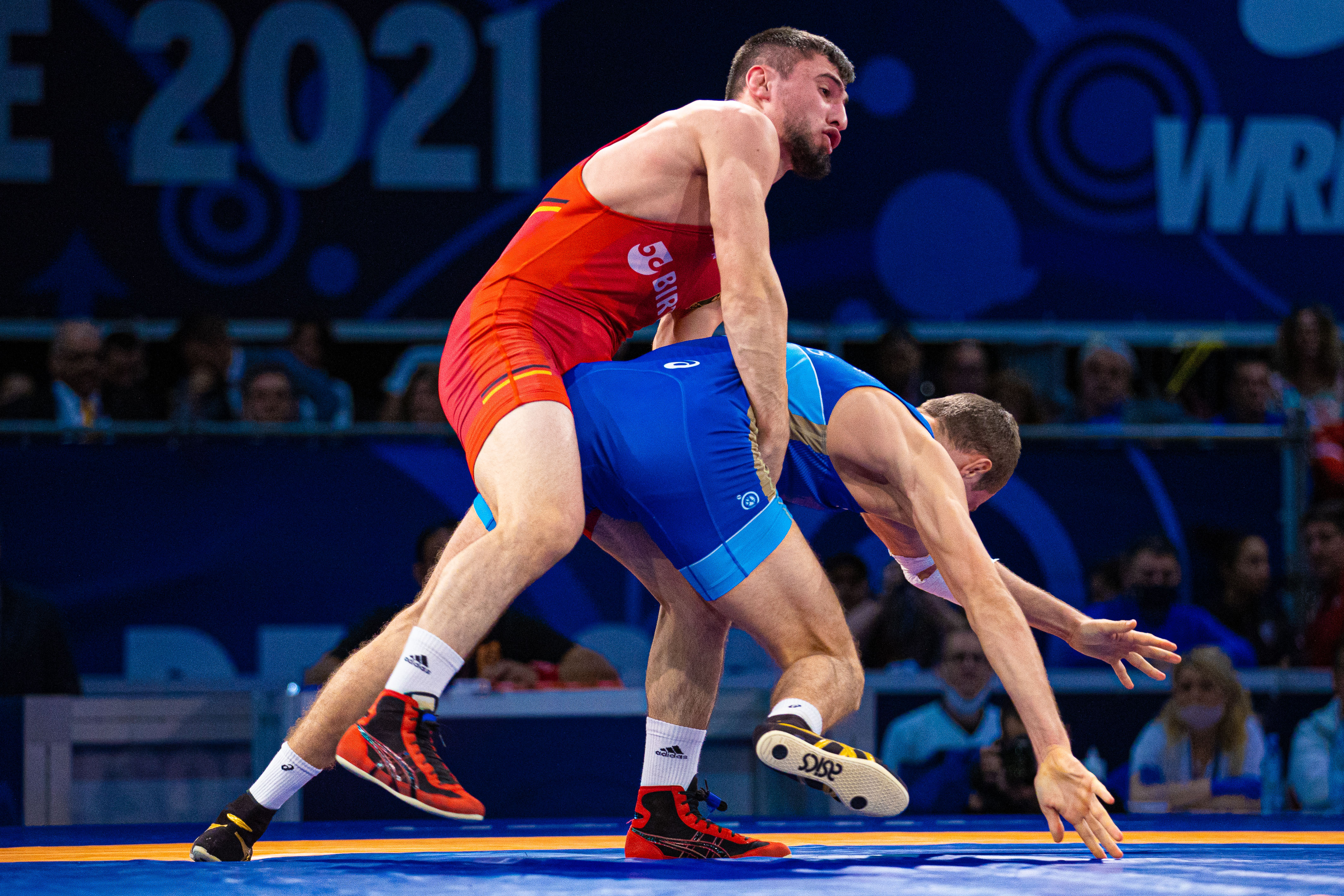 Russia was gunning for another gold as Sergei KUTUZOV (RUS) was in the 72kg final but Idris IBAEV (GER) spoiled that party when he stopped the Russian from improving his ’21 senior world silver after picking up a one-point win in the final.

"In Belgrade, I could concentrate well and show better wrestling," Ibaev said. "I prepared tactically and we worked a lot on my technique with the coach."

Ibaev, who wanted to be a boxer growing up in Goity village in Russia, found his calling for wrestling when he began training with Miakhdi IAKHIAEV (RUS), who won a bronze medal in Belgrade.

He struck first with a sneaky left-sided arm drag and grabbed the 2-0 lead. His Russian opponent stopped a gut-wrench attempt and scored a point for the reversal, cutting Ibaev’s lead to 2-1. Prior to the period’s closing whistle, Ibaev picked up the third point in the first period (inactivity) and carried the 3-1 lead into the closing period.

After stopping Kutuzov’s par terre offense, Ibaev picked up a gold medal for Germany with a 3-2 win.

Despite falling in the finals, Kutuzov still scored 20 points for Russia, which pushed them five-point ahead of Iran heading into the final pair of gold-medal matches. 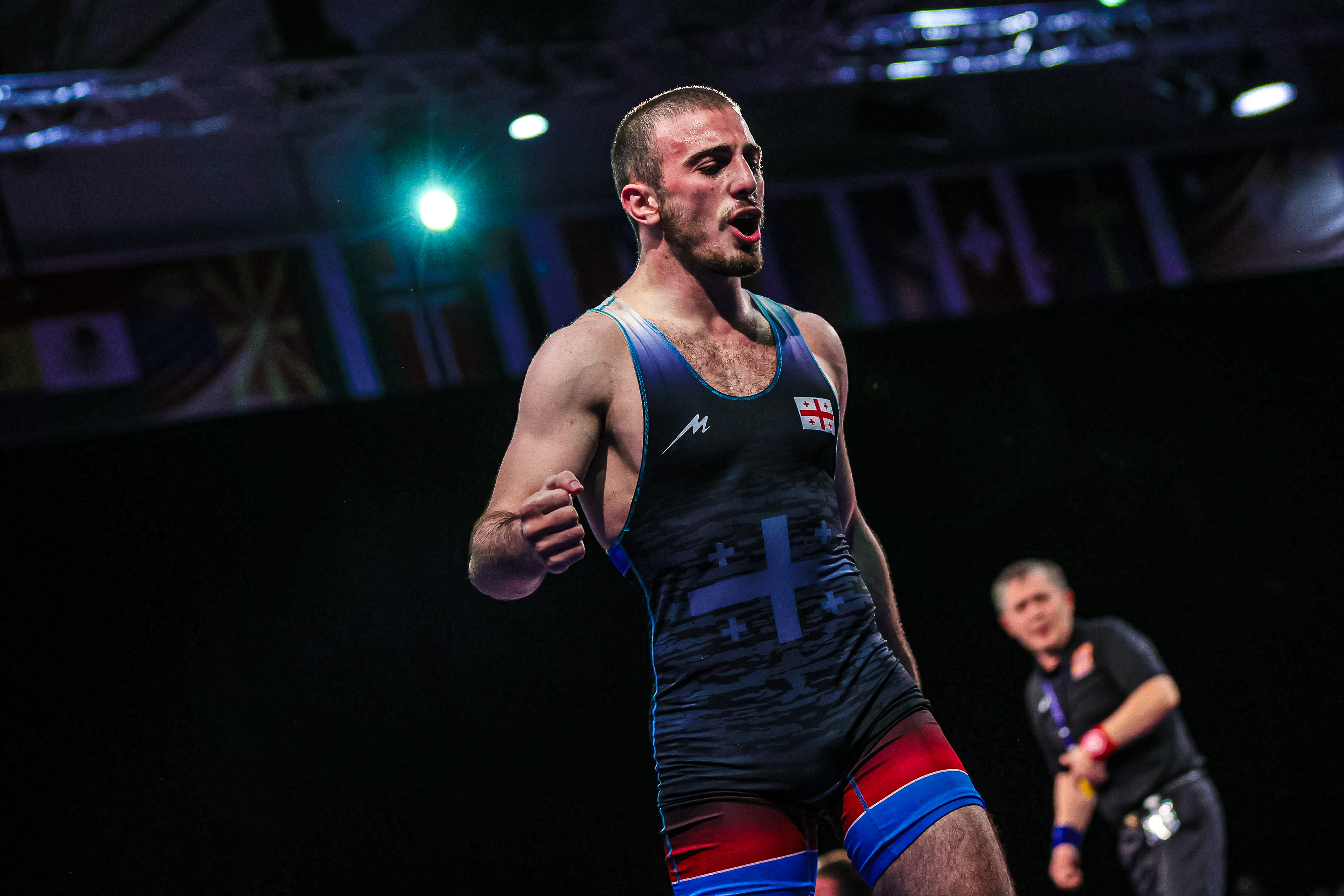 Georgia landed its second gold medal of the tournament when Aivengo RIKADZE (GEO) used a blistering five-point first period to stop Switzerland's Ramon BETSCHART (SUI) from becoming his country's first-ever Greco-Roman world champion at any level. It was the second time Betschart had been stopped in the world finals. He also dropped the '18 junior world finals in Trnava, Slovakia.

Rikadze never looked in trouble during the bout and his gold medal helped Georgia outplace Turkey for the third position in the title race. 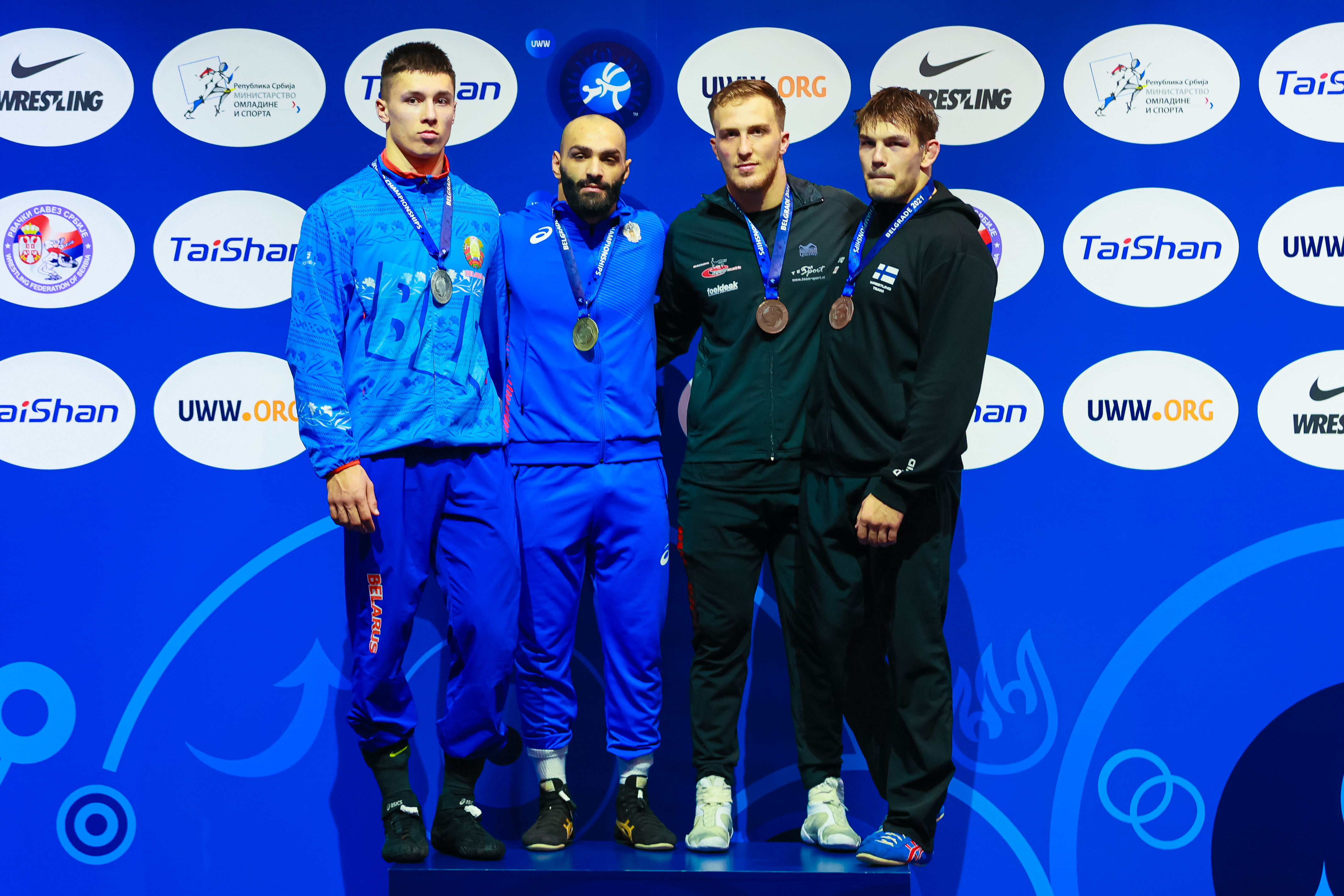 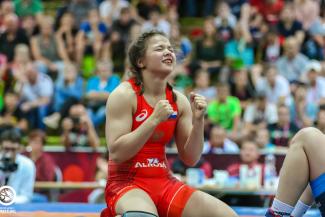 CORSIER-SUR-VEVEY, Switzerland (November 10) -- After not reaching the criteria defined by the United World Wrestling Bureau in June to host a 'World Championships, the decision was made Tuesday to organize an “Individual World Cup” as substitute event.

National Federations had been given until Thursday, November 5th to confirm their interest in participating at the 2020 World Championships. UWW had set a benchmark requiring that at least 8 of 10 of the top nations from the 2019 World Championships, and 70% of total athletes, participate in 2020. With many nations reinstating travel restrictions in response to COVID-19 the participation hurdles were not met.

“We want to see our athletes compete again on the mat. It’s important to our organization and we are committed to providing them an opportunity,” said United World Wrestling president Nenad Lalovic. “There are real challenges to overcome, but we are working together to find a safe and acceptable format where our top athletes can compete in a world class event.”

The “Individual World Cup” will be held in Belgrade with final confirmation of dates expected in the coming days. The event will include a prize pool of 300,000 CHF spread evenly across the 30 weight categories.

The Ordinary Congress and elections have been postponed to 2021, but the World Wrestling End of Year Conference will be organized as a virtual event.