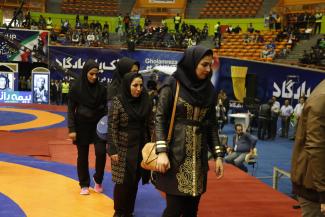 The IWF has chosen to establish annual salaries for women coaches in traditional wrestling. The salaries were awarded to Ferasat MOBTADI, Setarah ESMAEILI, and Maryam SADAT GHADAMGAHI.

In addition to establishing the salaries, the IWF awarded six women’s coaches with gold coins for their hard work and dedication to growing the sport of wrestling within Iran. During last week’s Takhti Cup the federation took time to reward Mobtadi, Esmaeili and Maryam VALIZADEH in belt wrestling; and Sadat Ghadamgahi, Homeria RAJABZADEH and Sakineh KAZEMI in grappling.

The President of Iran’s National Olympic Committee Mr. Kiomars HASHEMI was in attendance for the ceremony along with the vice-president of women’s wrestling Ms. Maryam MONAZAMI.