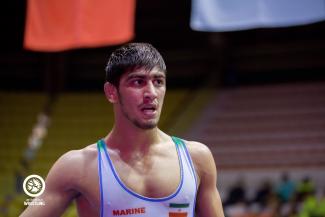 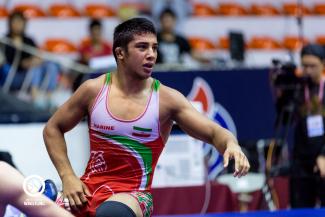 Mottaghinia claimed his title by defeating Isa SHAPIEV (UZB) 14-3 in the gold-medal match at 74kg. The Iranian trailed 3-2 midway through the second period before getting a takedown and leg lace, which he used to score 10 consecutive points to claim the technical fall.

Bazrighaleh edged India’s Deepak PUNIA 6-5 in the finals at 84kg. Punia trailed 6-1 before mounting a late rally, scoring two takedowns in the final 45 seconds to cut the deficit to one point. The Iranian, though, would hold on for the narrow victory.

Uzbekistan finished in second place with 67 points and crowned two champions, Jahongirmirza TUROBOV (55kg) and Khasanboy RAKHIMOV (120kg). Both won by fall in the finals. 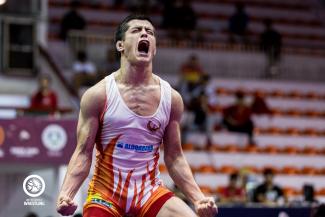 Turobov was dominant throughout the tournament, earning a technical fall and fall to reach the gold-medal match at 55kg. He then earned a fall over Mukhambet KUATBEK to win gold.

Rakhimov made quick work of his finals opponent, earning a fall in 15 seconds over Lkhagvager MUNKHTUR (MGL) to take the gold medal at 120kg.

The highest-scoring finals match took place at 50kg, where Nasanbuyan NARMANDAKH (MGL) came from behind to defeat Darkhan KALKENOV (KAZ) 17-13.  Kalkenov, who had not been scored upon until the finals, raced out to a 6-0 lead over Narmandakh and appeared to be on his way to gold. But the Mongolian battled back, cutting the deficit to 7-6 at the break. He took the lead a minute into the second period and never relinquished his lead. 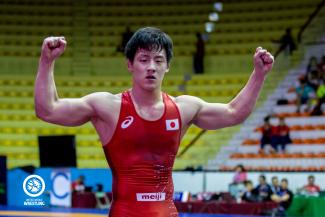 Ryoma ANRAKU (JPN) held off Amirhossein HOSSEINI (IRI) in the gold-medal match at 66kg. Anraku raced out to a 6-0 lead at the break, and then added another takedown early in the second period to his extend his led to 8-0. The Iranian came back strong with six unanswered points to get within two points with a minute remaining. Anraku, though, was able to hold on for the victory.

Sharvan SHARVAN (IND) capped off an impressive day by earning a fall in the gold-medal match at 60kg over Yones EMAMICHOGHAEI (IRI).