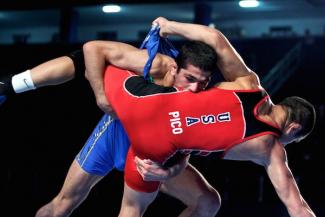 ZAGREB (August 10) – Asian champions Hassan YAZDANI CHARATI (IRI) and Alireza KARIMIMACHIANI (IRI) racked up convincing wins as Iran held off a late charge by the United States for the men’s freestyle team title on the final day at the Junior Wrestling World Championships.

Iran took the team title with 64 points from three gold medalists and three bronze medal winners despite four medals won by the Americans on the final day of competition at Dom Sportova arena for 58 points.

Iran, which scored 32 points on the first day with four wrestlers in the medal finals, received gold medals from Yazdanicharati and Karimimachiani at 66kg and 84kg and a key win from Asian champion Amin TAHERI (IRI) in the 120kg bronze medal bouts for the team triumph.

Russia also crowned its third gold medalist of the championships at 55kg with Azamat TUSKAEV (RUS) but slipped into third place with 49 points. Khasan BADRUDINOV (RUS) won at 50kg on the first day along with Georgi GOGAEV (RUS) at 96kg.

Dhesi, in the morning session, upended former cadet world champion Adam COON (USA), 7-6, in the semifinals.  Coon, however, rebounded in the consolation bracket with a bronze medal to complete a Greco-Freestyle double after winning the bronze medal in the classic style four days earlier.

A total of 200 wrestlers from 47 countries took part in the two-day freestyle competition.  The 2015 junior championships are slated for August 11-16 in Recife, Brazil as a prelude to the 2016 Olympic Games in Rio de Janeiro.

Azamat TUSKAEV (RUS) scored a late gut wrench and made it stand for a 4-3 win over Michalan HASAN ZADA (AZE) and Russia’s third gold medal of the freestyle competition.

European junior champion Baris KAYA (TUR) got rolling with a dump to the back against Asia champion ERDENEBILEG Puntsag (MGL) and then landed on top of a lateral drop for a 12-2 win at 1:36.

Asian champion Hassan YAZDANI CHARATI (IRI) broke open a close match in the second period with a series of takedowns on his way to a 9-2 win over 2013 cadet world champion Aaron PICO (USA).

Daichi TAKATANI (JPN) opened the second period with a double-leg takedown with exposure and closed with a four-point double for a 14-1 win over Mihail GEORGIEV (BUL) at 3:50.

Rasul ARSANALIEV (RUS), trailing in the early going, trapped Asian bronze medalist Iliyas ZHUMAY (KAZ) on his back near the end of the first period and pressed for the fall at 2:58.

Alireza KARIMIMACHIANI (IRI), the Asia champion in 2013, came out smoking in the second period with a double-leg to cross-ankle turn, then closed with a go-behind to gut wrench for a 12-2 technical fall over 2013 Asia silver medalist Azamat DAULETBEKOV (KAZ) at 3:54.

Defending champion Geno PETRIASHVILI (GEO) struck for a single-leg off the whistle and a pair of gut wrenches on his way to a 10-0 technical fall over Amar DHESI (CAN) in only 40 seconds for his second junior world title.

Asia champion Amin TAHERI (IRI) scored with a single-leg out-of-bounds for an 11-0 technical fall over Kamil KOSCIOLEK (POL) at 3:45 and sew up the team title for Iran.

Adam COON (USA), a bronze medal winner in Greco-Roman on Wednesday, bear-hugged European junior silver medalist Yunus Emre DEDE (TUR) to the mat for the fall at 2:20 and a rare Greco-Free double with his second bronze medal of the weeklong championships.