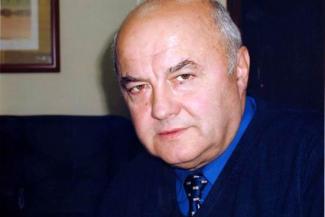 The International Network of Wrestling Researchers (INWR, in conjunction with the Scientific Commission of United World Wrestling, is pleased to announce that the Raiko Petrov Honor Lecture for 2015 will be presented by Professor Boris PODLIVAEV on "Women’s Wrestling-Some Observations from a Coach and Scientist"

The lecture will take place at the annual INWR Wrestling World Championships Scientific Symposium held at the Orleans Hotel on Saturday, September 5th. Registration information is available at the INWR website: www.inwr-wrestling.com

Professor Podlivaev has spent a lifetime in wrestling and is a member of the UWW Scientific Commission and a professor in the Department of theory and methodology of sports and martial arts at the Russian State University of Physical Culture, Sports and Tourism in Moscow. Boris was born in 1946 and is currently the Senior coach of the Russian team in freestyle women's wrestling. He is an Honored coach of Russia as well as an Honored worker of physical culture of the Russian Federation and has published more than 200 works.

The Rayko Petrov Honorary Lecture is named in honor of Professor RAYKO (1930-2011) His legacy shall always be remembered as part of present-day wrestling. A coach, a scientist, a pedagogue and outstandingly erudite person, he dedicated all his life to the “romantic idea, love, and magic…” of wrestling.