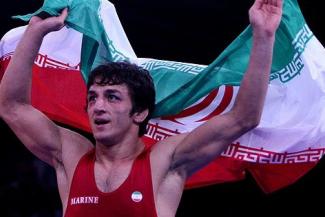 SZOMBATHELY, Hungary (February 27) – One of FILA’s marquee events just got a little brighter with the glimmer of gold.

Iran will bring three Olympic Games gold medalists and a total of eight world championship titles to the Hungarian Golden Grand Prix in Szombathely, making for what is sure to be one of 2014’s most exciting tournaments.

The Iranian contingency is lead by five-time world champion Hamid SORYAN (IRI) will be wrestling internationally for the first time since the London Olympics where the young wrestler won Iran’s first-ever Olympic gold medal in Greco-Roman.

Soryan teams up with fellow London 2012 gold medalists Omid NOROOZI (IRI), who is moving from 60kg to 66kg, and Ghasem REZAEI (IRI) at 98kg.  World champions Saeid ABDVALI (IRI) and Taleb NEMATPOUR (IRI) will also be competing at the Arena Savaria in Szombathely.

Joining the Hungarian will be 39-year-old ironman Mihaly DEAK BARDOS (HUN) at 130kg. The five-time world silver medalist will likely be in the mix for the medals on the first day of competition along with two-time world champion Heiki NABI (EST) and Olympic and world bronze medalist Johan EUREN (SWE).

Noroozi will also wrestle on the first day of competition and could face Revaz LASHKHI (GEO) in a replay of their 60kg gold medal final in London. World champion Nematpour also hopes to kick off the new wrestling season with a win at 85kg over Victor Lorincz or Damian JANIKOWSKI (POL), a bronze medalist in London.

The second day of competition would well turn into an Iran-Hungary dual meet with Soryan and Modos featured at 59kg, Abdvali and Lorincz at 71kg, Rezaei and Kiss at 98kg.

Kayaalp becomes a favorite at 130kg while Kus will be in the mix of wrestlers vying for a place on the medals podium at 75kg.  Joining Kayaalp and Kus will be fellow Vehbi Emre victors Atakan YUKSEL (TUR) at 66kg and Ildem CENK (TUR) at 98kg as well as two-time former world champion Selcuk CEBI (TUR) at 80kg.

According to the entry lists, a total 144 wrestlers from 22 national wrestling federations are expected to compete in the two-day event.

59kg – Five-time world champion and London 2012 gold medalist Hamid SORYAN (IRI) has been a gifted lift-and-launch wrestler for more than a decade, but he reportedly struggled to make weight at 55kg. An extra four kilograms could mean the renewal of a stellar career.

Challengers to Soryan will line up behind local favorite Peter MODOS (HUN), who has bronze medals from London and last year’s world championships in Budapest.

Shota TANOKURA (JPN) won the Szombathely crown at 55kg a year ago, while world No.5 at 60kg Edward BARSEGJAN (POL) comes to Hungary as the winner at the Paris Golden Grand Prix.

66kg – Omid NOROOZI (IRI), the 2011 world champion and London 2012 gold medalist at 60kg, returned to action at last November’s Golden Grand Prix Final in Baku.  Noroozi, however, settled for a bronze medal after being stunned with a headlock in the semifinals by Rasul CHUNAYEV (AZE).

Revaz LASHKHI (GEO), silver medalist behind Noroozi in London, bagged another silver medal at 66kg in Szombathely last year, but comes into the GGP after a triumph in Paris.

Istvan KOZAK (HUN) won at 60kg in 2013 and moves up to 66kg this year, while defending champion at 66kg Tamas LORINCZ (HUN) is entered at the newly created 71kg category.

71kg – London 2012 silver medalist Tamas LORINCZ (HUN) and 2011 world champion Saeid ABDVALI (IRI) appear to be the class of this non-Olympic category.  Both were victorious at the Yadegar Imam Cup in Tehran, with Lorincz winning at 71kg and Abdvali taking his third straight title at 75kg.

In their only head-to-head in major competition thus far, Lorincz owns a win over Abdvali in the 2010 world championships.

Meanwhile, Mankhar TSKHADAIA (GEO) was bronze medalist at 66kg in London and bagged his only medal of 2013 in Szombathely – a bronze at 74kg.  The world silver medalist to Abdvali in 2011 kicked off 2014 with another bronze medal in Paris.

75kg – In one of only two weight categories without an Olympic Games or world champion, Mark MADSEN (DEN) comes in as the defending champion. Madsen made it to the bronze medal finals at London 2012 and in Budapest, but had to settle for fifth place in both.

In addition to being the winner in Szombathely last year, the Danish warrior also finished second at the Golden Grand Prix Final in Baku in November.

Likely to challenge Madsen will be London Olympian Zurabi DATUNASHVILI (GEO) who took silver in last year’s European championships in Tblisi and won the Paris Golden Grand Prix crown in early February.  Bozo STARCEVIC (CRO) will also be in the hunt for medals after finishing with bronze medals in Szombathely last year and a month later in Tblisi.

80kg – Two-time Olympian at 74kg and the winner at 84kg in Szombathely last year, Peter BACSI (HUN) arrives in the former Roman provincial capital with a win in the Yadegar Imam Cup.

Former world bronze medal winner at 74kg Neven ZUGAJ (CRO), who won a silver medal at 74kg in Szombathely last year, will try to follow up his win at the Zagreb Open in early February with another triumph at Arena Savaria.

Rafik HUSEYNOV (AZE), 2011 European champion at 74kg, closed 2013 with a win at the Golden Grand Prix Final in Baku and will try to open 2014 with a win in Szombathely.

While Rezaei has not wrestled on the international circuit for 18 months, Kiss has won the Golden Grand Prix Final in Baku and the Yadegar Imam Cup in Tehran over the last six months and is looking to improve on his silver in Szombathely a year ago.

Marthin Hamlet NIELSEN (NOR) won a bronze medal in Szombathely last year and made considerable strides under coach Jimmy LIDBERG (SWE) in 2013.  Nielsen finished second to Kiss in Baku last November and has come out of the chute in 2014 with a win at the Thor Masters.

130kg – In addition to world silver medalist Riza KAYAALP (TUR), London 2012 silver medalist and two-time world champion Heiki NABI (EST) appears to be the favorite among the early entries for Szombathely. But Nabi may not up to speed yet for 2014, especially after a ninth-place finish in the Nikola Petrov event in Sofia over the previous weekend.

Olympic and world bronze medalist Johan EUREN (SWE) has won 10 tournament titles since London -- including the prestigious Pytlasinski Cup last August and the Yadegar Imam Cup in January – and will be looking to reach the top of the podium again.

Also in the hunt will be Golden Grand Prix Final winner Saba SHARIATI (AZE) and Paris titlist Iakobi KAJAIA (GEO), who was also the runner-up to Shariati in Baku.