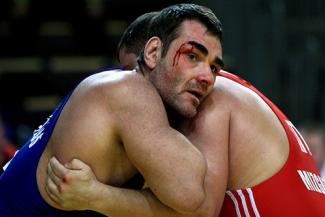 Soryan, also the owner of five world championship titles, racked up four wins by technical superiority at Arena Savaria as he stormed his way to the 59kg title – his first international triumph since the London Olympics in August 2012.

Meanwhile, fellow London 2012 medalists Tama LORINCZ (HUN) and Manuchar TSKHADAIA (GEO) closed the tourney with a classic Greco-Roman duel at 71kg with Lorincz winning by disqualification for his third straight title in Szombathely.

Iran, making their first visit to Szombathely, won the team title with 75 points, largely from three champions, three runners-up and a pair of third-place finishers. Host Hungary finished second in the team standings with 74 points and Georgia took third with 63 points.

A total of 123 wrestlers from 23 countries took part in the two-day event in this former Roman provincial capital.

In the final with Vehbi Emre bronze medalist Rahman BILICI (TUR), Soryan rolled up a 7-0 lead with three gut wrenches in the first period and coolly spun behind to start the second for a 9-0 technical fall.

71kg – London 2012 silver medalist at 66kg Tamas LORINCZ (HUN) and bronze medalist Manuchar TSKHADAIA (GEO) met in the final of this non-Olympic weight with a lot of hang-banging, and spirited pushing and shoving.

Tskhadaia was cautioned twice for passivity in the first period and Lorincz took two cautions early in the second, one on a grabbing the singlet call.  With the next caution meaning disqualification, Lorincz picked up the pace and Tskhadaia was tagged for blocking with his head.

Defending champion Peter BACSI (HUN) was disqualified in the semifinals, but bounced back with a technical fall in the bronze medal final.  Rafik HUSEYNOV (AZE), the Golden Grand Prix Final winner last November, held on for a bronze medal in Szombathely.

98kg – 2013 European bronze medal winner Cenk ILDEM (TUR) schooled emerging talent Marthin Hamlet NIELSEN (NOR) on winning the inside position. So when he earned a second caution against his 22-year-old opponent, Ildem opted to keep him on his feet and promptly marched him out of bounds for the disqualification.