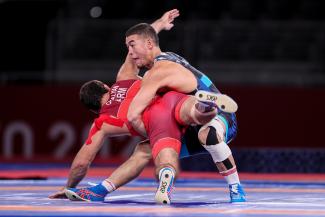 ULAANBAATAR, Mongolia (April 12) -- A year after the Asian Olympic Qualifier and the Asian Championships split the continental talent pool, a full lineup of Asia's most electrifying wrestlers will head to the Mongolian capital looking to gain continental supremacy.

The Greco-Roman portion of the competition will feature nearly 100 wrestlers from 14 different nations – including three Olympic medalists and four returning Asian titleholders who are on a quest to defend their gold from 2021.

Yu SHIOTANI (JPN), Hansu RYU (KOR), Naser ALIZADEH (IRI) and Mehdi Mohammad BALIHAMZEHDEH (IRI) are the four wrestlers who departed Almaty with gold around their necks and will take their talents to Ulaanbaatar.

Last year, the 20-year-old surpassed all expectations in his debut campaign on the senior level. Shiotani put up 37 total points in his three matches and closed out the competition with a thrilling 17-7 technical superiority win over Uzbekistan's then-reigning Asian champion Ilkhom BAKHROMOV. 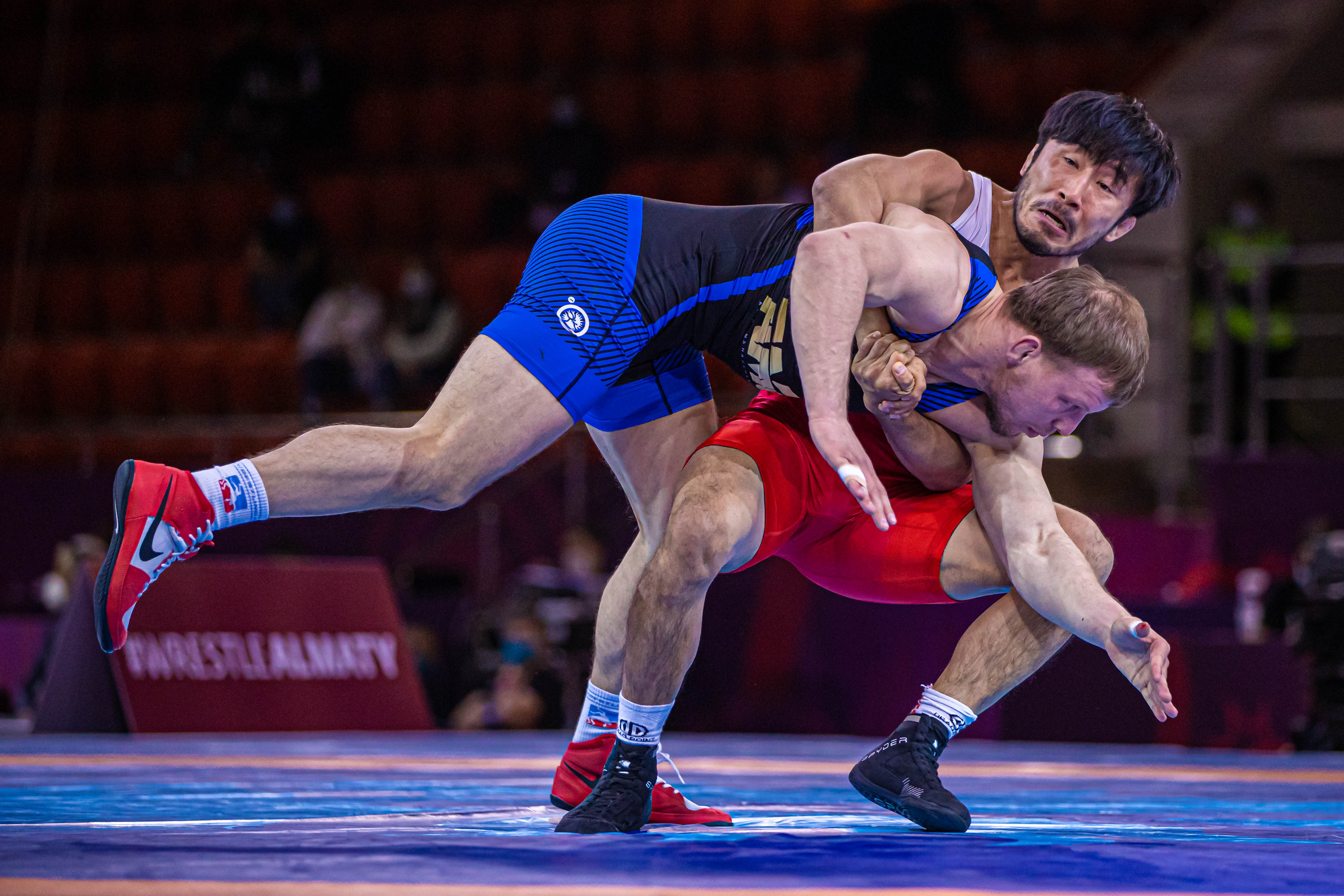 At 67kg, defending three-time Asian gold medalist Ryu is coming to Mongolia with a 10-match continental winning streak. In total, the former two-time world champion has an impressive 19-2 record at the Asian Championships and has won five medals – four of which are gold. His last loss came at the 2018 Asian Championships, where a large forehead gash forced him to injury default out of his quarterfinals bout against Tsuchika SHIMOYAMADA (JPN). 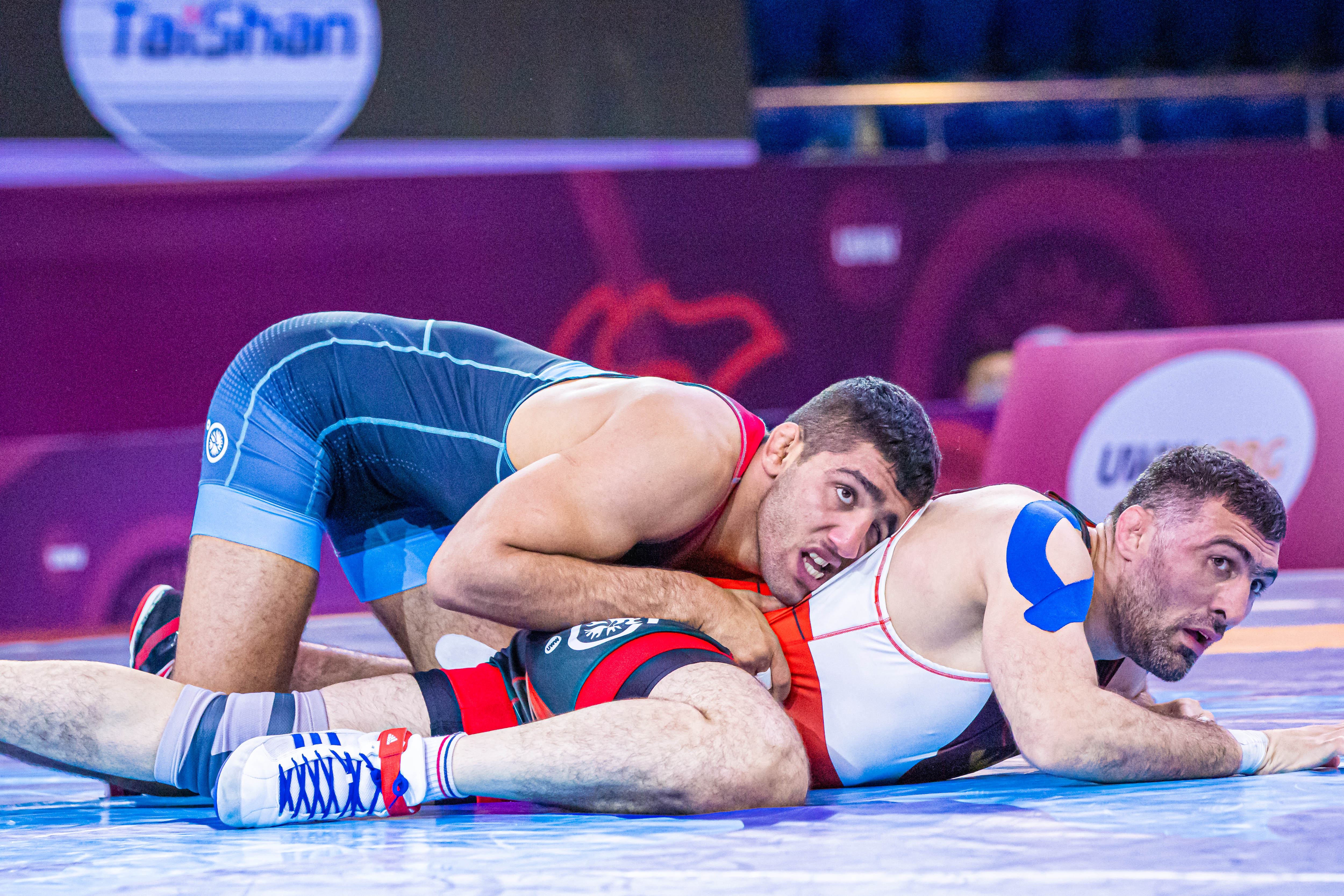 Although Iran is bringing is different look squad from the Olympics and World Championships, their lineup will still feature a pair of returning gold medalists from the last season.

At 87kg, fans will see the return of rising star Naser Alizadeh.

The 24-year-old is 11-2 over the last 12 months, falling only to Tokyo Olympic bronze medalist Zurabi DATUNASHVILI (SRB) and U23 world champion Aleksandr KOMAROV (RWF) en route to bronze medal finishes at the World Olympic Qualifiers and the U23 World Championships.

Another Iranian looking to win a second consecutive Asian gold medal is Mehdi Balihamzehdeh. He's stepping into Iran's lineup at 97kg for the man who stole his Olympic dreams through their finals battle at the '21 Poland Open, Mohammadhadi SARAVI (IRI).

Balihamzehdeh is 6-1 on the senior scene, with that lone Tokyo and Oslo spot-determining loss coming to Saravi, who ultimately went on to win Olympic bronze and World gold. 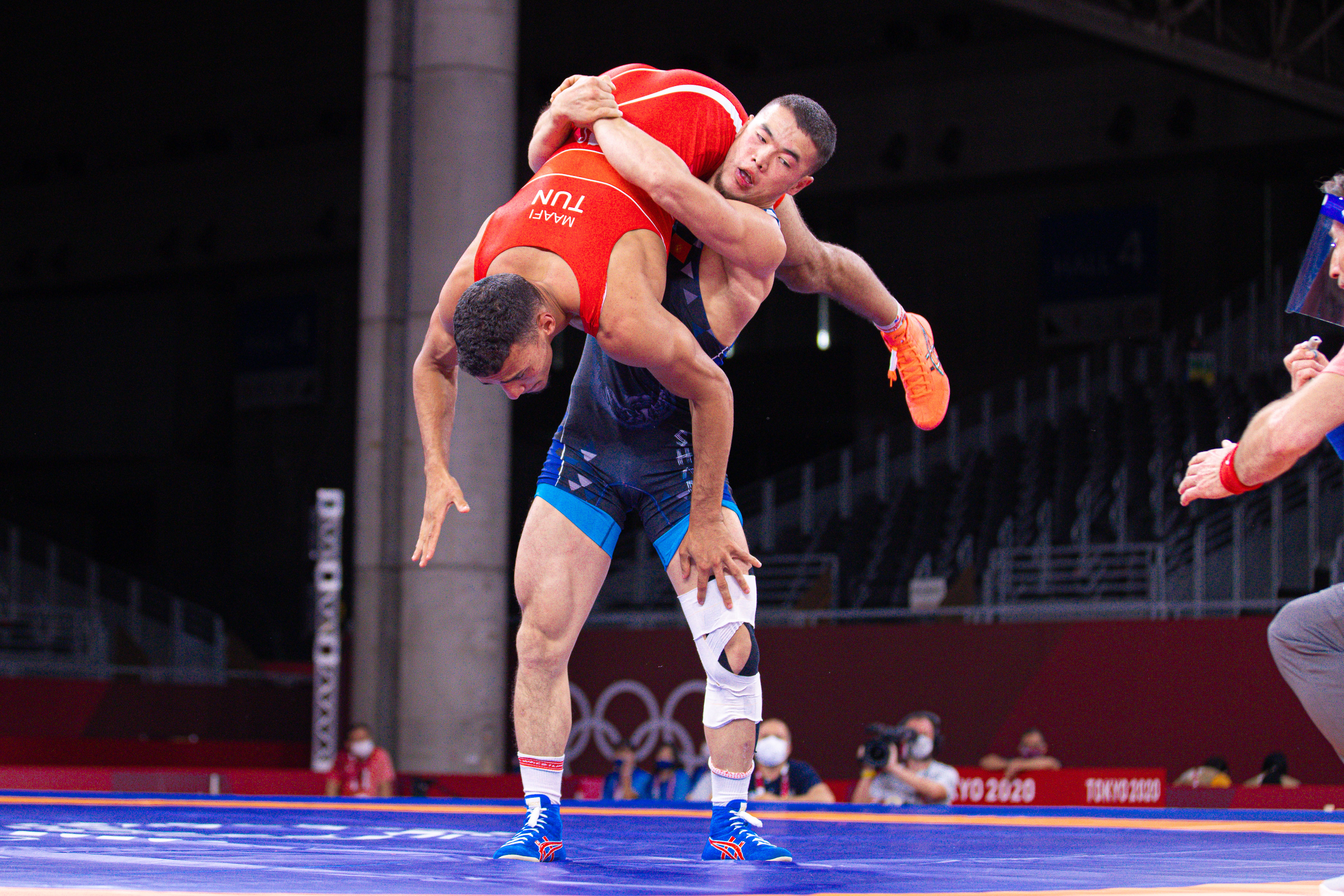 Olympic silver medalist Akzhol MAKHMUDOV (KGZ) will be wrestling at the Asian Championships only for the second time. (Photo: UWW / Kadir Caliskan)

Walihan, the Tokyo Olympic bronze medalist at 60kg, will be bumping up two weight classes to 67kg, while Makhmudov and Kim are the favorites to clash for gold at 77kg.

Makhmudov will make his second career appearance at the Asian Championships. He won gold in his home debut at the 2018 edition and if the 23-year-old superstar wants to win a second Asian gold, he'll have to knock off the two-time Olympic medalist.

In their last meeting, Makhmudov upset Kim, 7-3, to win gold at the '18 Asian Games.

This may be a continental changing of guard moment, as Makhmudov has been on a meteoric rise to the top of the world stage. In contrast, Kim has tumbled over the last year.

Since winning the London Olympic gold medal, Kim has competed in 30 events. He's finished inside the top five in 23 of those 30 events. Furthermore, he's only fallen outside of top five contentions seven times – with a trio of those finishes coming in his last three outings.

Prior to those uncharacteristic faults, Kim finished on the podium at nine consecutive events – including the World and Asian Championships and six Ranking Series events. 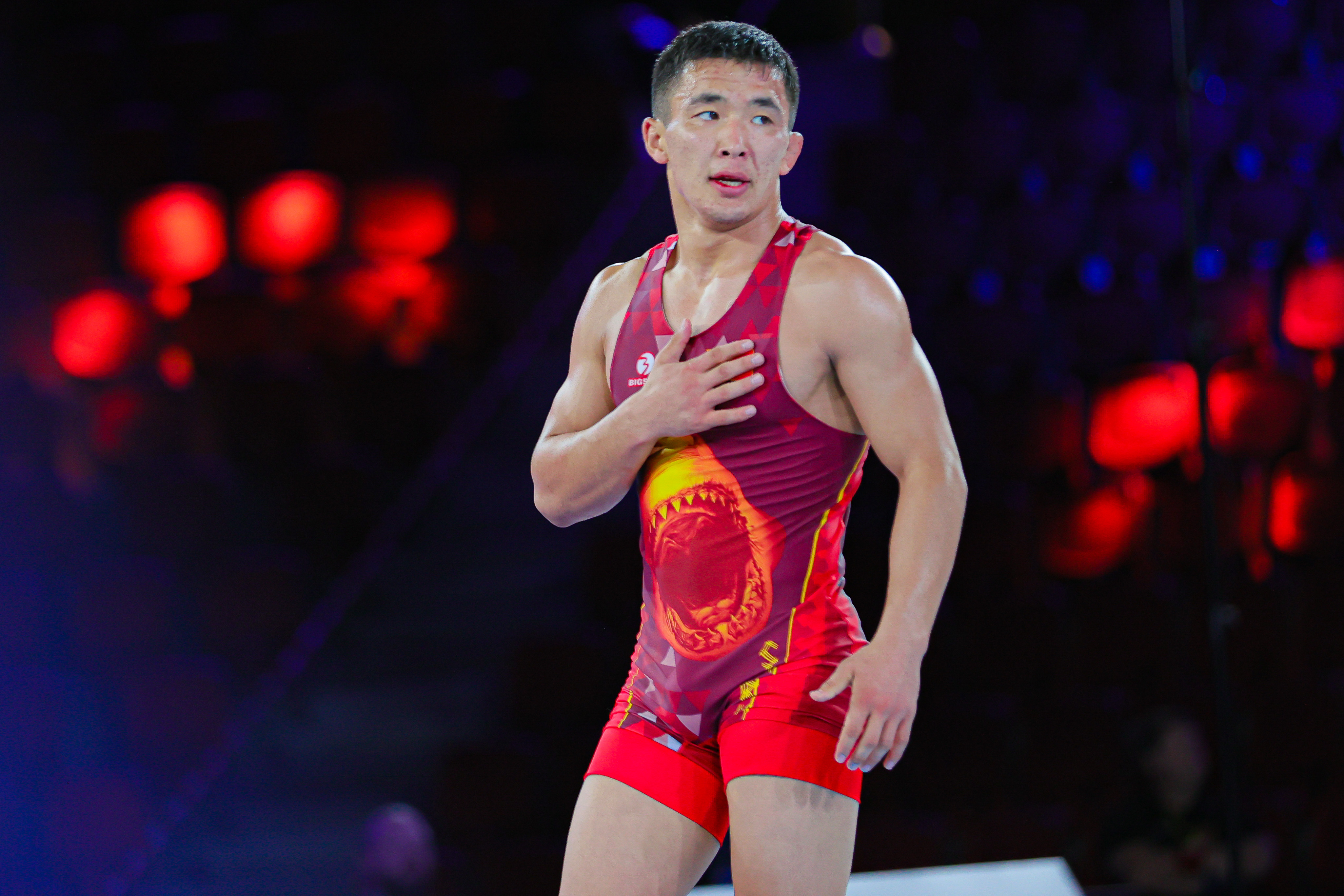 Zholaman SHARSHENBEKOV (KGZ) will be the favorite to win the 60kg title in Mongolia. (Photo: UWW / Kadir Caliskan)

Sharshenbekov, a world finalist in Oslo, is the frontrunner to win 60kg gold. This will be his third senior Asian appearance. In his first two showings, he won silver medals.

Uzbekistan will look to Bakhramov, Bakhshilloev and Assakalov to carry their hot streaks over from the Yasar Dogu. The trio went a combined 13-0 at the first Ranking Series event of the season, winning titles at 63kg, 67kg and 97kg, respectively.

Bakhramov's run to gold in Istanbul was one of the most impressive of the competition. He picked up a fall over '22 European silver medalist Taleh MAMMADOV (AZE) and an unimaginable 9-0 throttling over defending world champion Victor CIOBANU (MDA) in the gold-medal match.

Bakhshilloev blew through his four opponents in Turkey, including a convincing 5-2 win over European champion Morten THORESEN (NOR) in the gold medal match.

Assakalov, a long-term 87kg guy, will be wrestling in his second competition up at 97kg. The gray-hair veteran seamlessly transitioned to his new weight in Turkey, scoring big wins over European champion Felix BALDAUF (NOR) and '22 European finalist Arvi SAVOLAINEN (FIN).

The Asian Championships kick off next Tuesday (April 19) on www.uww.org

ULAANBAATAR, Mongolia (April 29) -- Japan came out all guns blazing at the Asian Championships after missing the previous edition due to travel restrictions. The women's team won the team title comfortably.

Here are the 10 finals from the women's wrestling at the Asian Championships.