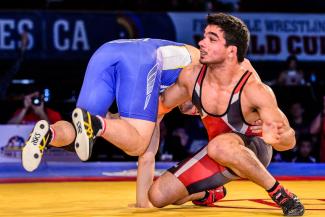 Yadav, who qualified his nation for the Olympic Games in Rio de Janeiro at the 2015 World Championships in Las Vegas, has been provisionally suspended by the Indian Olympic Association (IOA) and is restricted from competing at the Rio Games.

United World Wrestling informed the Indian Olympic Association last week that since the positive test occurred outside of the qualification event they would be allowed replace Yadav with another wrestler, or else vacate the qualification spot.

The Indian Olympic Association informed United World Wrestling of their desire to enter Parveen RANA as their nation’s replacement at 74kg in men’s freestyle.

The most up-to-date list of all entries for the 2016 Olympic Games in Rio de Janeiro can be found on the United World Wrestling site under the tab “RIO 2016.”