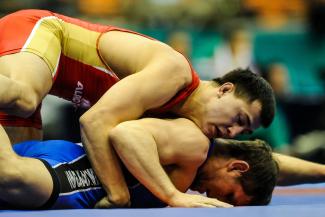 CORSIER-SUR-VEVEY (September 28) -- As outlined in a circular to national federations and posted on the United World Wrestling website in April 2015 all senior-level Greco-Roman competitions are now being competed without forced par-terre. The rule changes went into effect after the Olympic Games in Rio de Janeiro and have been in effect for Cadet, Junior and U-23 wrestlers for 18 months.