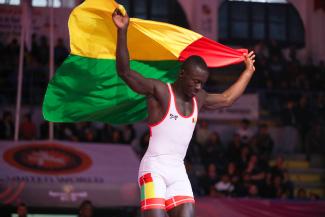 Cumba Mbali halted Adama DIATTA'S (SEN) quest to win his 10th African championship title, then went on to defeat Amas DANIEL (NGR) to defend his 2019 African crown. He jumped from 29th to 9th in the rankings with his 18-point gold-medal victory in Alger.

Cumba Mbali downed Diatta 3-2, in the semifinals, then avenged his All-African Games finals loss to Amas DANIEL (NGR) with the two-point victory in the gold-medal match. He scored the 4-2 come-from-behind win over Daniel after trailing 2-0 for the majority of the first period. A late takedown in the first period, and then again in the second period awarded Cumba Mbali his second African title in as many tries.

Abdelhak Kherbache blanked Diamantino IUNA FAFE (GBS), 7-0, in the 57kg finals and moved into the top-ten of the world rankings. Kherbache, the defending African champion, moved up eight spots from his previous No. 16 ranking that he earned from finishing in 11th at the 2019 World Championships. He now sits two points ahead of Givi DAVIDOVI (ITA) in the No. 8 spot.

Ogbonna JOHN (NGR) is ranked seventh in the world at 74kg after winning his African gold on Sunday night. (Photo: Kadir Caliskan)

Ogbonna John handled Ishak BOUKHORS (ALG), 5-1, in the 74kg finals and climbed to seventh in the world rankings. John’s gold on Sunday was worth 20 points, which sandwiched him between No. 6 Mao OKUI (JPN) and former-No.7 Kamil RYBICKI (POL).

Adekuoroye Climbs to World No. 1 After Winning Sixth African Title 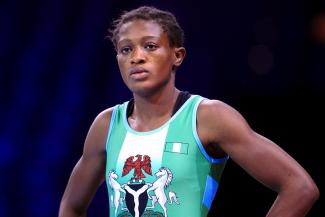 Adekuoroye won her sixth consecutive African championship crown and overthrew Risako KAWAI (JPN) for the world’s top-ranking at 57kg. Kawai will have an opportunity to regain the top spot later this month at the Asian Championships.

Adekuoroye started the year ranked third in the world at 57kg. She jumped then-second-ranked RONG Ningning (CHN) in last month’s rankings with a gold-medal finish at the Matteo Pellicone. She brought 43 points and a second ranking to Algeria and used her 18-point gold medal to move one-point ahead of Kawai, the reigning three-time world champion and 2016 Olympic champion. (Kawai will compete in the Asian Championships with an opportunity to regain her top rankings).

Adekuoroye went 4-0 on Saturday and outscored her opponents 31-0. She picked up her most notable wins against No. 12 (@ 59kg) Eman EBRAHIM (EGY). She pinned Ebrahim in the opening round and defeated her 10-0 in the Nordic bracket finals.

Fellow Nigerian Blessing Oborududu won gold on Saturday and moved ahead of Jenny FRANSSON (SWE) in the 68kg world rankings.

Oborududu brought her African gold-medal tally to ten and surpassed Fransson for the No. 2 spot in the 68kg women’s wrestling rankings. Oborududu’s title on Saturday was worth 18 points, moving her eight points ahead of the Swedish wrestler, who won’t compete at next week’s European Championships.

Nigeria overpowered the women’s wrestling portion of the competition and won the team title with their ten finalists and six champions. Nigeria finished with 230 points, which was 64 points ahead of second-place Tunisia (166 points), and 66 points ahead of third-place Egypt (164 points).

Mohamed ELSAYED (EGY) is ranked third in the world at 67kg after his gold-medal performance in Algeria. (Photo: United World Wretling)

El Sayed won the 67kg gold medal and earned 18 Ranking Series points, moving into the third spot of the rankings before the European Championships kick-off. He has 33 points and trails top-ranked Ismael BORRERO MOLINA (CUB) by nine points.

El Sayed, who qualified Egypt for the Olympic Games with a fifth-place finish in Nur-Sultan, entered the African Championships ranked fifth in the world at 67kg and was five points from leaping into the top-three of the rankings. His summit to the top of the African podium for the fourth time in his last five tries pushed him into the top-three of the rankings with one Ranking Series event left before the Olympic Games.

The two-time U23 world champion won all four of his matches on Saturday. He outscored his opponents 27-0 en route to the 67kg gold medal.

Abdellatif MOHAMED (EGY) snuck past Oscar PINO HINDES (CUB) for the No. 2 spot at 130kg with his African title-winning effort on Saturday.  (Photo: Gabor Martin)

Abdellatif Mohamed was the second Egyptian who improved his top-five ranking with a gold-medal performance in Algeria.

Mohamed, who still needs to qualify Egypt for the Olympic Games at 130kg, entered the African Championships ranked third in the world with 30 Ranking Series points. He climbed to the second-ranking and gained a ten-point lead over Cuba's Oscar PINO HINDES (CUB).

Mohamed collected three wins on his road to gold on Saturday. He demolished his trio of opponents, scoring a fall and two technical superiority victories.