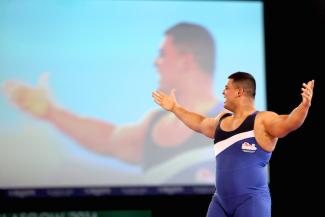 GLASGOW – As the wrestling portion of the Commonwealth Games closed on Thursday night in Glasgow, more than 2000 fans streamed out of the Wrestling Hall, many with smiles on their faces and a new respect for a sport not widely practiced in the United Kingdom.

“I never expected it would be so exciting,” said Martin Ross, a Glasgow native seeing the sport in-person for the first time. “The kids absolutely loved it.”

It wasn’t just the children who saw something positive in the wrestling event; Commonwealth Games President Prince Imran of Malaysia also took note of the sport’s appeal with the local crowds.

“The fans are very active and entertained and that’s good for the sport and the Games.”

Part of wrestling’s appeal to fans was that many of the Commonwealth’s participating nations had active, talented teams. By the end of three days of competition ten countries had earned a medal.

“Wrestling is a universal sport and the teams here compete at a world-class level,” said Prince Imran. “That is very important.”

The change in the promotion and attitude surrounding the sport of wrestling dates back to the IOC executive board’s February 2013 decision to eliminate the sport from the Olympic Programme in 2020. The subsequent campaign to earn reinstatement produced massive organizational turnover and changes to the competition format.

The main change was wrestling’s effort to simplify its rules and create more action on the mat. The new rules have resulted in increased action and higher scoring – something new fans of the sport enjoy.

“I’m not an expert in wrestling, but like with any sport the easier it is the more fans you’ll attract,” said Prince Imran. “Sports real competition is between each other and wrestling learned that lesson last year and has momentum going forward.”

Prince Imran also noted that the leadership change had been vital to wrestling’s recent resurgence and success at the Commonwealth Games.

“I’m a great admirer of President Lalovic,” added Prince Imran. “He not only helped saved the sport but is putting it on a direction towards growth. It’s great to watch.”

The next Commonwealth Games will take place in Gold Coast, Australia and are set to being on April 4, 2018.