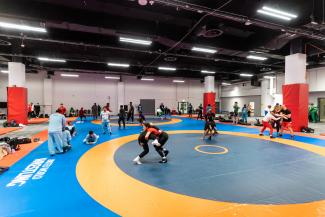 COVENTRY, England (August 5) -- The Commonwealth Games are moving towards the business end and wrestling will be one of the sports to be highlighted at the Games. At the Coventry Arena, wrestlers will be eyeing to win the gold medals in 12 freestyle and women's wrestling. On day one, six weight classes in action, three freestyle and three for women's.

14:54: Deepak PUNIA (IND) will wrestle for the 86kg gold after beating Moore 3-1 in the semifinals. Dhesi with a technical superiority 12-2 win over Grewal. He will wrestle the 125kg gold

14:51: Two India-Canada semifinals. At 86kg, Deepak PUNIA (IND) is wrestling Alexander MOORE (CAN) and leading 3-0. At 125kg, Mohit GREWAL (IND) and Amarveer DHESI (CAN) have exchanged takedowns with Dhesi leading 2-2 on criteria.

14:45: Blessing OBORUDUDU (NGR) is back in the 68kg final at Commonwealth. At 57kg, Odunayo ADEKUOROYE (NGR) is up against Hannah TAYLOR (CAN) and begins with a double for four. A takedown makes it 6-0. A takedown before the break and one after gives her a 10-0 win and a place in the final against Anshu MALIK (IND)

15:42: Bajrang PUNIA (IND) with another top win. He beats George RAMM (ENG) 10-0 in the 65kg semifinal and will be defending his gold from four years ago.

15:05: Lachlan MCNEIL (CAN) is going into the 65kg finals. He beats Inayat ULLAH (PAK) 11-0 and is a win away from being crowned as the Commonwealth champion. On Mat B, 86kg defending champion Muhammad INAM (PAK) is into the semifinals

14:50: The first semifinal of the night is Esther KOLAWOLE (NGR) and U23 world champion Ana GONZALEZ (CAN) at 62kg. Gonzalez takes the first takedown but Kolawole blasts a double to lead 2-2 on criteria. Just before the break, Gonzalez is quick to score a takedown and lead 4-2. Another slow start but Gonzalez with a counter and go behind to extend her lead 6-2. Single leg counter from Kolawole and she trims the lead to 6-4. A minute left in the bout. Gonzalez gets her takedown and a turn to make it 10-4. That will be the end of this semifinal she will wrestle for gold at 62kg

14:35: Former world champion Linda MORAIS (CAN) has jumped up to 68kg and she begins her campaign with a fall and will wrestle in the semifinal here in Birmingham.

14:26: A top bout at 68kg on Mat A. Olympic silver medalist Blessing OBORUDUDU (NGR) up against Divya KAKRAN (IND). The two begin cautiously but Oborududu scores a stepout to lead 1-0. The Nigerian wrestler has raced to a 5-0 lead at the break after adding two takedowns. Kakran tries going for the far leg but Oborududu manages to keep her away and counters with two takedowns. She finishes things with another takedown and win 11-0

14:25: Mohit GREWAL (IND) and Alexios KAOUSLIDIS (CYP) battle it out for six minutes but it's Grewal who keeps it under control and wins 10-1 at 125kg. Bajrang PUNIA (IND) moves into the semifinals at 65kg with another fall

14:10: Mandhir KOONER (ENG) was warned for passivity against Mohamed BUNDU (SLE) and looked like Bundu will make a move against Kooner. But the England wrestler pulled off a four-pointer and then secured the fall and the crowd enjoyed that

14:08: Defending champion at 86kg Muhammad INAM (PAK) gets going with a 10-0 win against Kieran MALONE (SCO). He will now wrestle in the 86kg quarterfinals

14:04: World silver medalist Anshu MALIK (IND) up against Irene SYMEONIDIS (AUS) for her 57kg quarterfinals. She begins with a go behind and turns to lead 8-0 in 36 seconds. Malik will close the bout with a takedown and win in a minute and four seconds

14:01: Returning bronze medalist at 86kg Syerus ESLAMI (ENG) trailed Charalampos CHOIRAS (CYP) for five minutes and 30 seconds but scored a takedown to claim a 6-4 lead and win his 86kg quarterfinals. The crowd has gone ecstatic.

13:55: Lachlan MCNEIL (CAN) with a figure-4 and he moves past Ross CONNELLY (SCO) with a 10-0 technical fall. He will wrestle in the 65kg semifinals

13:45: Blessing OBORUDUDU (NGR) with a fantastic warm-up win against Blandine NGIRI (CMR). She used a series of takedowns to win 10-0

13:30: The referees and fans are ready. The bouts are resuming and set for the quarterfinals of the 6 weight classes

13:00: We had a longer delay than expected but seems like we should be back on track in the next 15 minutes. We will be resuming action at 13:30 local time

11:00: We are experiencing a small technical delay in the competition but we will be back soon. We are expecting a delay of an hour. Wrestling will resume at 12:15 local time.

10:55: Mandhir KOONER (ENG) with another win for England. The crowd loves it as Kooner beats Aaro LEHAULI (TGA) at 125kg. At 86kg, Deepak PUNIA (IND) also begins with a win.

10:50: George RAMM (ENG) absolutely puts the crowd on its feet. Mostafa REZAEIFAR (AUS) tried his best to break Ramm's defense but the England wrestler hangs on for 3-0 win

10:45: India's Tokyo Olympic bronze medalist Bajrang PUNIA (IND) with a quick pin over  Lowe BINGHAM (NRU) at 65kg. He is the defending champion as well

10:30: Welcome to day one of the Commonwealth Games. Inayat ULLAH (PAK) and Adam VELLA (MLT) will begin the proceedings on Mat A at 57kg. Brahm RICHARDS (NZL) vs Ross CONNELLY (SCO) in the 65kg quarterfinals.

CORSIER-SUR-VEVEY, Switzerland (August 17): The Commonwealth Games in Birmingham, which concluded on August 8, saw some thrilling wrestling action, with athletes from 10 countries finishing on the podium. New rivalries were established in the process and history was rewritten, the latter being true in the case of one wrestler in particular.

For Ahinsa and her country, though, the medal will hold a special significance. The bronze, after all, was Sri Lanka’s first medal in wrestling at the Commonwealth Games. And Ahinsa, only 18 years old, was the youngest to win a medal.

Ahinsa’s medal is also a testimony to the success of the UWW’s developmental programs.

Ahinsa had been a part of the Crysbro Next Champ Program, which is run by the National Olympic Committee of Sri Lanka. As a part of the program, the schoolgirl from the country’s North Western Province was sent to Hungary, where she got exposure to training and competing with some of the top-level athletes. 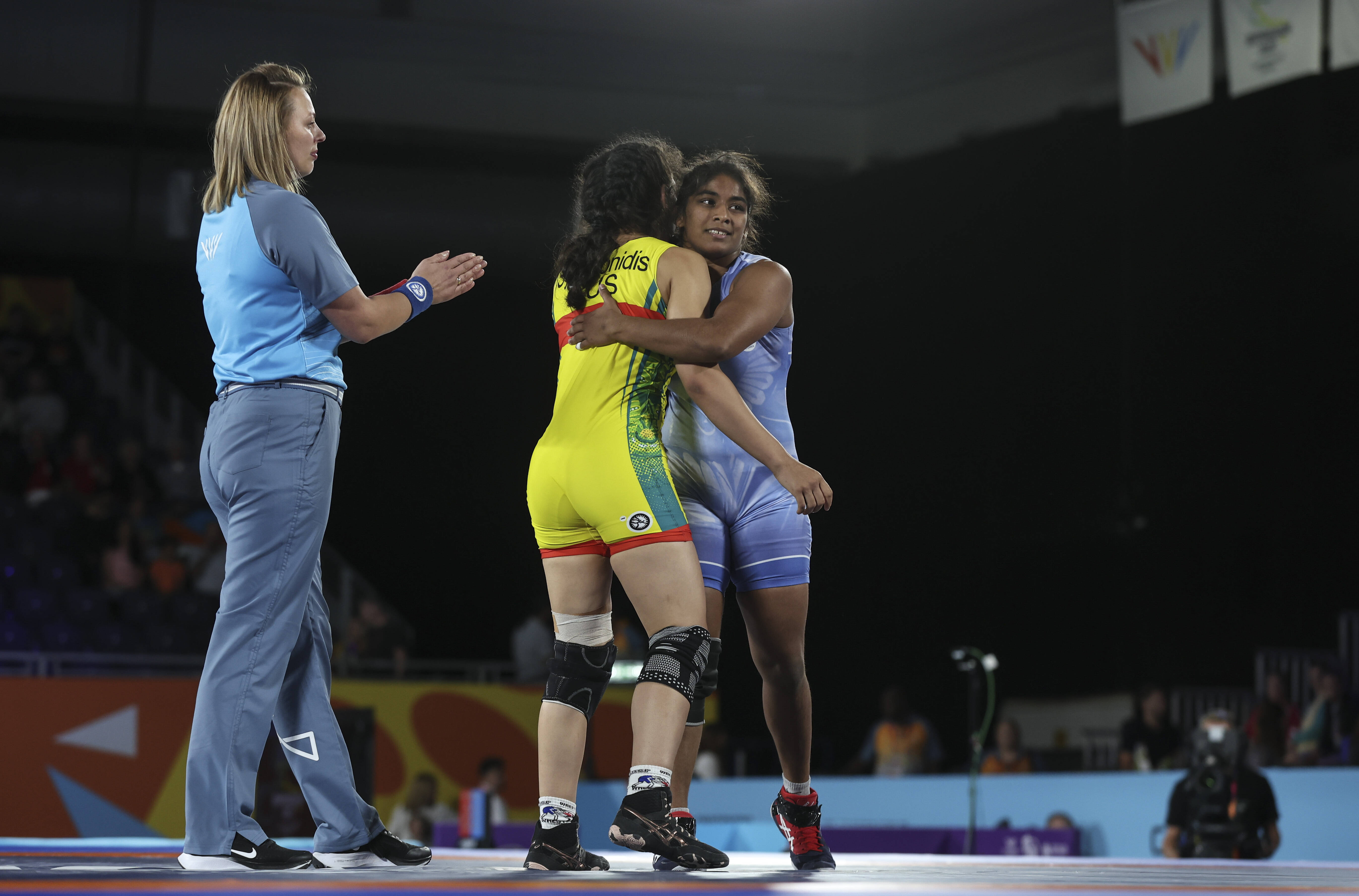 The UWW funded and supported her three-month training program at its partner center in Hungary, the Kozma István Hungarian Wrestling Academy (KIMBA), in collaboration with the NOC of Sri Lanka, which expressed its gratitude towards UWW and KIMBA.

The partnership between UWW and KIMBA came to fruition during President Lalovic’s visit to Budapest, Hungary, last year in December. During his trip, a partnership was initiated with KIMBA for the global development of the sport. Under the agreement, it was decided that KIMBA would host several international wrestling events, training camps, seminars and other programs.

The positive impact of the collaboration is for all to see, and Ahinsa’s medal at the Commonwealth Games underlines the importance UWW places on such developmental programs.