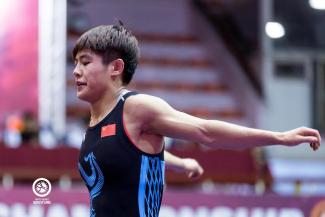 Team Japan headed into Saturday night’s finals at the Asian Junior Championships in Taiching, with three chances for gold, but when the curtain came down on the night’s finals world’s most dominant women’s wrestling nation would be left holding a trio of silver medals.

The gold medal finals kicked off at 48kg where Chihiro SAWADA (JPN) seemed to have the upper hand on China’s Jiang ZHU (CHN) late into the second period, holding steady with a 2-0 lead and controlling the tie-ups. But the Chinese wrestler closed the distance and kept up her attacks to find a high double leg late to snag the equalizing takedown. After a scramble and challenge by Sawada the final score tallied, 4-2 in favor of Zhu. 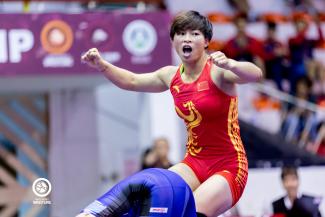 The two nations battled again in the 55kg final with Jing LIANG (CHN) taking on Tomoha UCHIJO (JPN) in a thrilling back-and-forth contest. The match got off to a slow and defensive start, but in the second period Liang and Uchijo traded takedowns, turns and lifts for a total of three lead changes. Liang sealed the match late with a late hi-crotch and lift for two that sealed China’s second gold medal of the night. 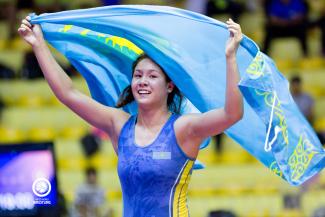 Japan’s final hope for gold came with Misuzu ENOMOTO facing off against Aina TEMIRTASSOVA of Kazakhstan. The taller Temirtassova had spent the day throwing her opponents and off the whistle pummeled in for position. Enomoto staved off the Kazakh’s attack for the first period, but in the second Temirtassova managed to launch Enomoto for a 4-1 lead.

The Japanese middleweight fought back, striking on an outside single to make the match 4-3 heading into the final minute, but Temirtassova held strong, winning the match 5-3 and keeping Team Japan off the top of the podium.

China took the team title with 73 points followed by Japan with 56 and India with 52. 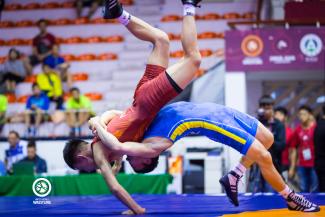 Mongolia Goes One for Two in Freestyle Finals

They might have been the smallest competitors, but Nasanbuyan NARMANDAKH (MGL) and Darkhan KALKENOV (KAZ) provided giant action during the 50kg finals Saturday night in Taichung. The pair combined for more than 30 points in one of the most awe-inspiring and energetic displays of offense this year.

After six minutes of throws, trips, takedowns and reversals it was Narmandakh who would prevail 17-13. 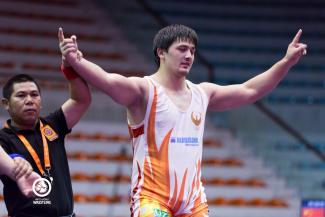 At 120kg Khasanboy RAKHIMOV (UZB) cemented his position as world’s best heavyweight prospect with a crushing thirty second pin against Mongolia’s Lkhagvagerel MUNKHTUR. The Uzbek bruiser is expected to compete at the Junior World Championships this August in Finland. 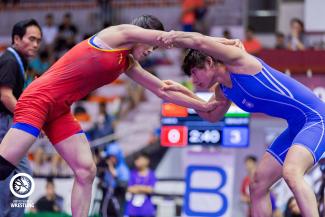 China’s Yumei CHEN kicked off the women’s gold medal finals with a commanding 14-4 technical fall victory over Sonu SONU of India. The Chinese grappler ceded a four-point takedown early in the 44kg finals, but returned fire with a takedown of her own and three gut wrenches to make it a 10-4 match into the break.

Chen closed out the match early in the second period winning by technical fall, 14-4

At 59kg Jing JIANG made Chian’s second final appearance making quick work of Thi My Hanh NGUYEN (VIE). The stout Chinese competitor shot a head inside single, lifted and converted a takedown early in the first before finding four gut wrenches to win the match by technical fall, 12-1. 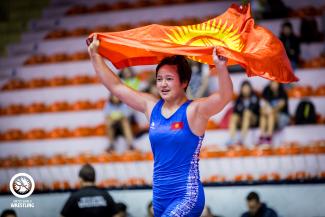 Japan is the most dominant force in women’s wrestling, but with their top athletes competing at the Meiji Cup in Tokyo the team was not up to their usual golden ways.

Chisaki HORI did manage to find her way into the 51kg finals where she faced India’s Pooja GEHLOT (IND). The duo excited the crowd with a flurry of attacks and crafty defense, but it was all Gehlot as time expired with the Indian winning a narrow 6-5 victory.

In the 67kg finals Meerim ZHUMANAZAROVA (KGZ) took almost a dozen low leg singles but was continually thwarted by the trick knee of the ultra-flexible Bakhtigul BALTANIYAZOVA (UZB). Despite the tough defense Zhumanazarova found two takedowns in the first period before cracking the match wide open in the second with a powerful double leg and crotch lift made it 8-0. A final hi crotch gave the Uzbek a 10-0 technical fall victory and gold medal. 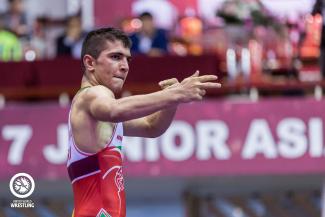 Iran Caps Team Title in Greco-Roman with Pair of Titles

They weren’t beautiful matches, but Poya Soulat DAD MARZ and Amirmohammad HAJIPOURGANJI (IRI) pushed and pulled their way to a pair of gold medals Thursday night in Taichung, Taiwan.

For his part, Poya Soulat DAD MARZ (IRI) took out Alpamys DASTANBEK (KAZ) in the 50kg with an anti-climactic 2-1 decision. Iranian big man Amirmohammad HAJIPOURGANJI (IRI) then followed with a chippy 6-3 decision against Satish SATISH (IND).

The final team scores for Greco-Roman were Iran 71, Kazakhstan 58 and India 55.