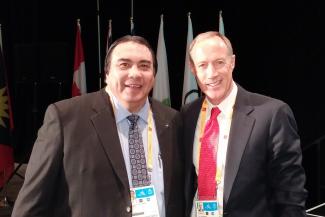 The Congress of the Association of Pan American Sports Confederation (APASC) United World Wrestling bureau member Francisco Lee was reelected unanimously as the Generla secreatry of the APASC a position to which he was elected in 2011. The eleection, held before the start of the XVII Pan American Games in Toronto adds Lee to the executive eommittee for the period 2015-2019. Lee is also the president of United World Wrestling Americas

The APASC is an organization founded in 1991, which integrates the 38 American Sports Confederations. The Chairman is Mr. Ivar Sisniega of México and among its main functions is coordinating the work with the Pan American Sports Organization (PASO) where all the National Olympic Committees of America are affiliated.