Bonne, Bacsi and Gray Named Comeback Athletes of the Year

In the quarterfinals, Bonne trailed Iran’s Mohammadbagher YAKHKESHI by two points with five seconds left when he hit a four-point inside trip and stole the match, 10-8.

Then, in the finals, Bonne trailed Russia’s Gadzhimurad RASHIDOV  2-0 before scoring a massive five-point move, which ultimately catapulted him to the top of the podium with a 5-5 criteria win.

This was Bonne's third world medal, previously finishing up the 2014 and 2017 World Championships with bronze medals.

Peter Bacsi, the 35-year-old Hungarian, won his first world championship since 2014 earning himself this year's Greco-Roman Comeback Athlete of the Year.

Basci trailed Turkey’s Emrah KUS 3-0 in the 82kg gold medal bout but scored four unanswered points to give the host nation their first and only gold medal of the Budapest World Championships.

The 2018 World Championships were rumored to be Bacsi’s last, but after his surprise victory he didn't rule out the 2019 Astana World Championships, though he did confirm he will not be making a run for Hungary’s 2020 Tokyo Olympic team.

Adeline Gray (USA) was named the women’s wrestling Comeback Athlete of the Year after returning from a year absence to win her fourth world title.

In the semifinals, Gray edged Wiebe, 3-1, and wrapped up the gold-medal bout early with a 13-1 win over Adar, winning the gold medal in a weight class that featured eight previous world champions.

The next award to be released will be the Outstanding Performances of the Year, which will come out on Thursday.

End of the year freestyle rankings 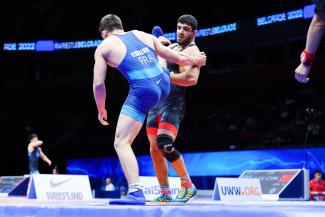 CORSIER-SUR-VEVEY, Switzerland (November 11) -- The final set of rankings for the freestyle wrestlers is out. With more than six ranking events and two championships, wrestlers had the opportunity to finish in the top three and collect the prize money.

The wrestlers managed to claim the points from the four Ranking Series events, continental championships and the World Championships. Two Games were also included in the Rankings Series but a total of only four events were counted for awarding the points.

Here are the rankings after the 2022 season. 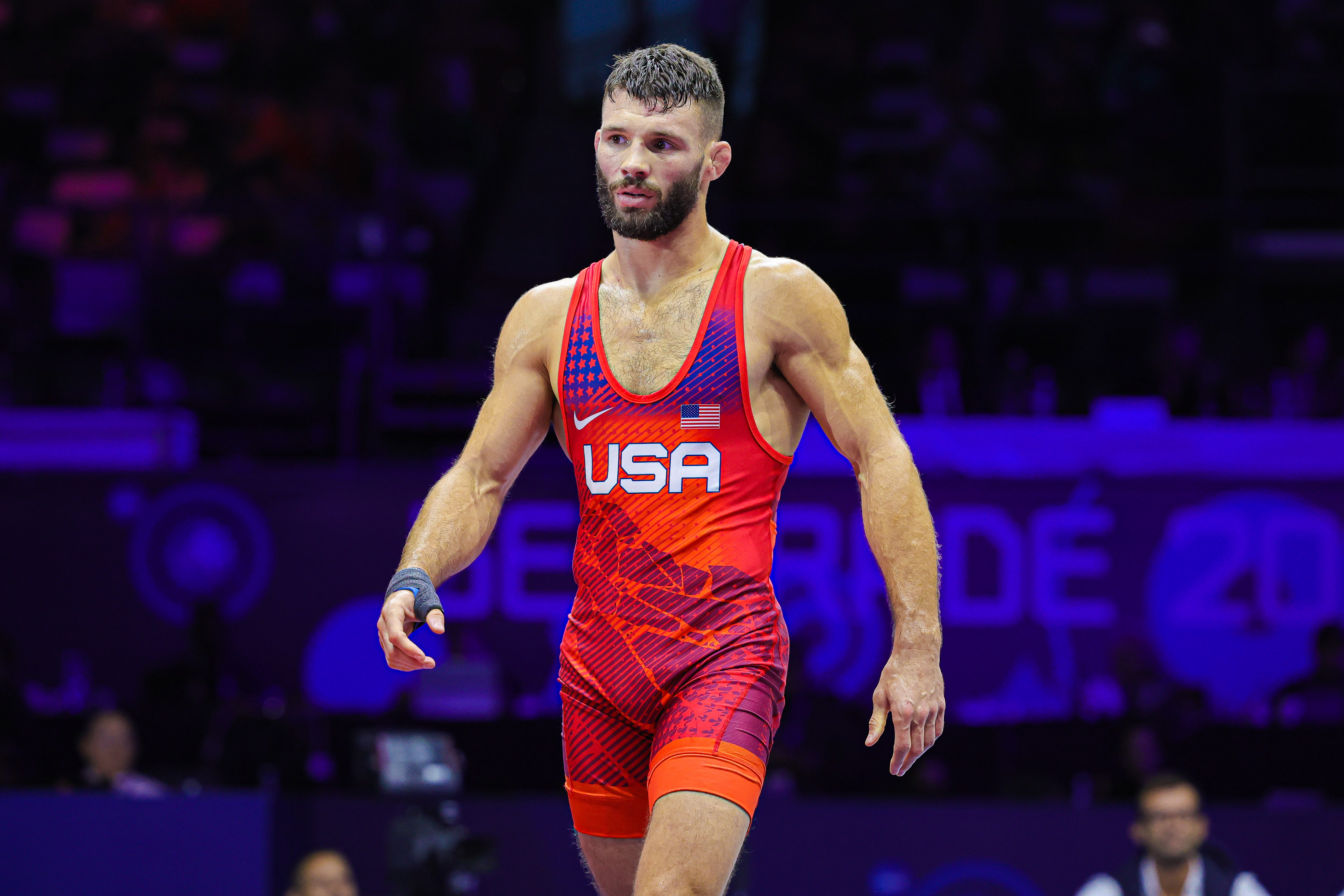 Thomas GILMAN (USA) earned the top billing at 57kg after medaling in three point-earning events. He won the Pan-American Championships and the Zouhaier Sghaier Ranking Series event before closing the season with a runner-up finish at the World Championships. Altogether, the Tokyo Olympic bronze medalist was 10-1 on the season.

Zelimkhan ABAKAROV (ALB) grabbed gold in Belgrade and collected 45,000 Ranking Series points, which was good enough to catapult him to the No. 2 spot in the 57kg rankings. With his win over Gilman in the 57kg world finals, the 29-year-old Albanian made history for his country, becoming the first wrestler to win a world title.

Abakarov’s gold in Belgrade also earned a berth on the All-World team for the 2022 Freestyle World Cup, which will take place in Coralville, Iowa, USA, December 10-11.

Zanabazar ZANDANBUD (MGL) finished the season tied with Abakarov with 45,000, but due to the Albanian’s higher placement at the World Championships, the Mongolian ended up in the third position in the 57kg rankings. His 2022 body of work included fifth-place finishes at the Asian Championships and Yasar Dogu Ranking Series event, before finishing the season with a bronze medal at the 2022 World Championships. 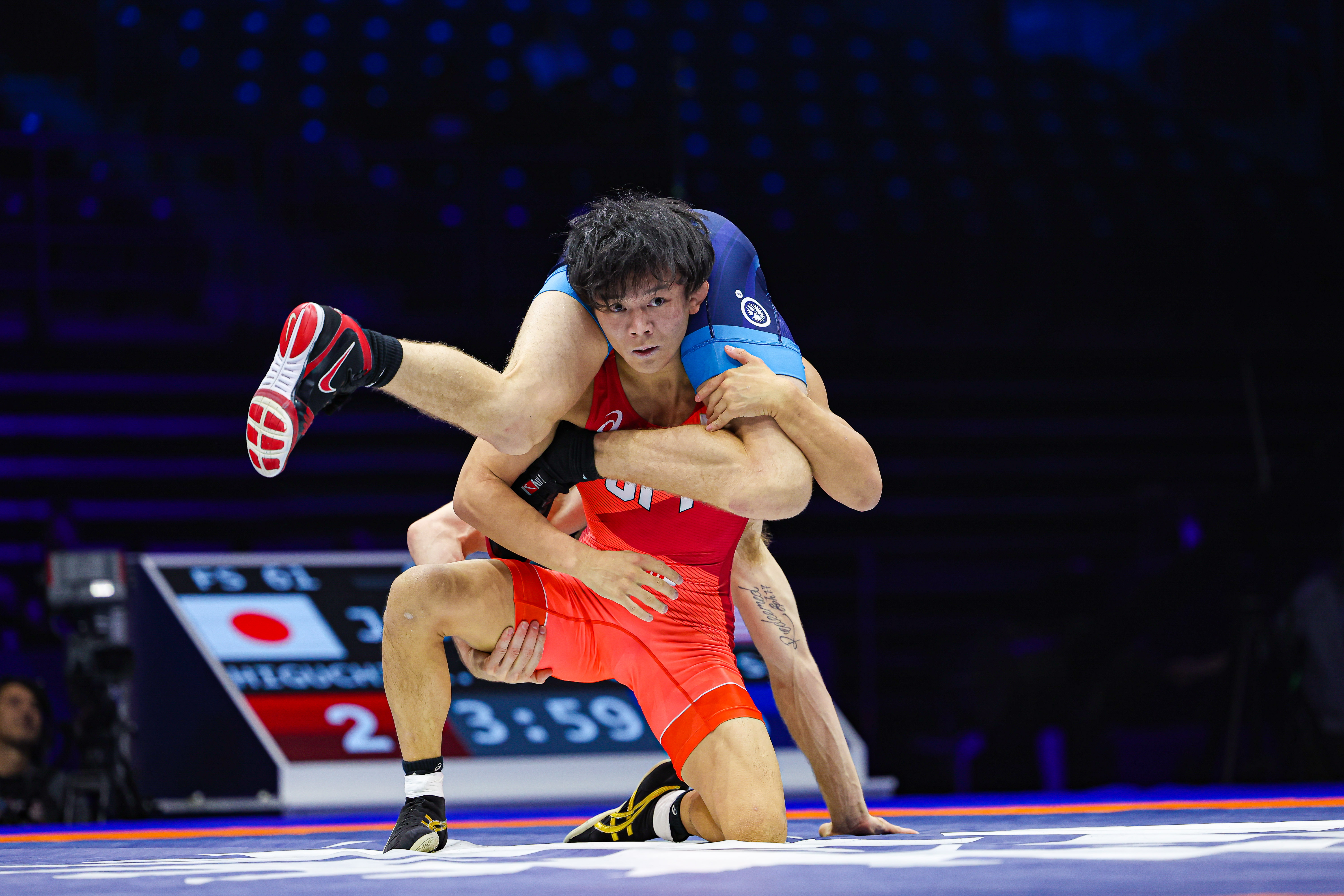 Rei HIGUCHI (JPN) went 8-0 during his 2022 season and finished the year as the 61kg’s top guy. He won four matches in each of his outings and submitted to the podium at the Asian Championships and World Championships.

Armenian youngster Arsen HARUTYUNYAN (ARM) rounds out the year ranked second in the world at 61kg after collecting European gold and a world bronze.

Harutyunyan had his handed raised in 11 of the 12 bouts he competed in this season, and only fell to eventual world champion Higuchi in the world quarterfinals. Despite it not counting towards his senior-level point total, the 23-year-old native of Masis, Armenia, won his second consecutive U23 world title.

Suleyman ATLI (TUR) ended the year ranked third in the world at 61kg with 39,120 points. He was a runner-up at the European Championships and a bronze-medal finisher at the Zouhaier Sghaier Ranking Series. Although he didn’t win a medal, he did finish in the top ten of the World Championships and Yasar Dogu Ranking Series event.

Rahman AMOUZAD (IRI) won the Asian and world titles to leapfrong his opponents for the number one rank at 65kg. (Photo: UWW / Kadir Caliskan)

Amouzad took out Bajrang, a Tokyo bronze medal winner, to win the Asian title. Then, he cruised to a 9-2 win over three-time world champion and two-time Olympic medalist Aliyev in the world semifinals.

Bajrang edged Hungary’s Iszmail MUSZUKAJEV (HUN) by 200 points for the No. 2 spot at 65kg.

Muszukajev won the European Championships and took home a bronze from the World Championships, completing the year with 44,000 points.

Sebastian RIVERIA (PUR) also had 44,000 points but he did not win a medal at the World Championships while Muszukajev did to finish ahead of Riveria. 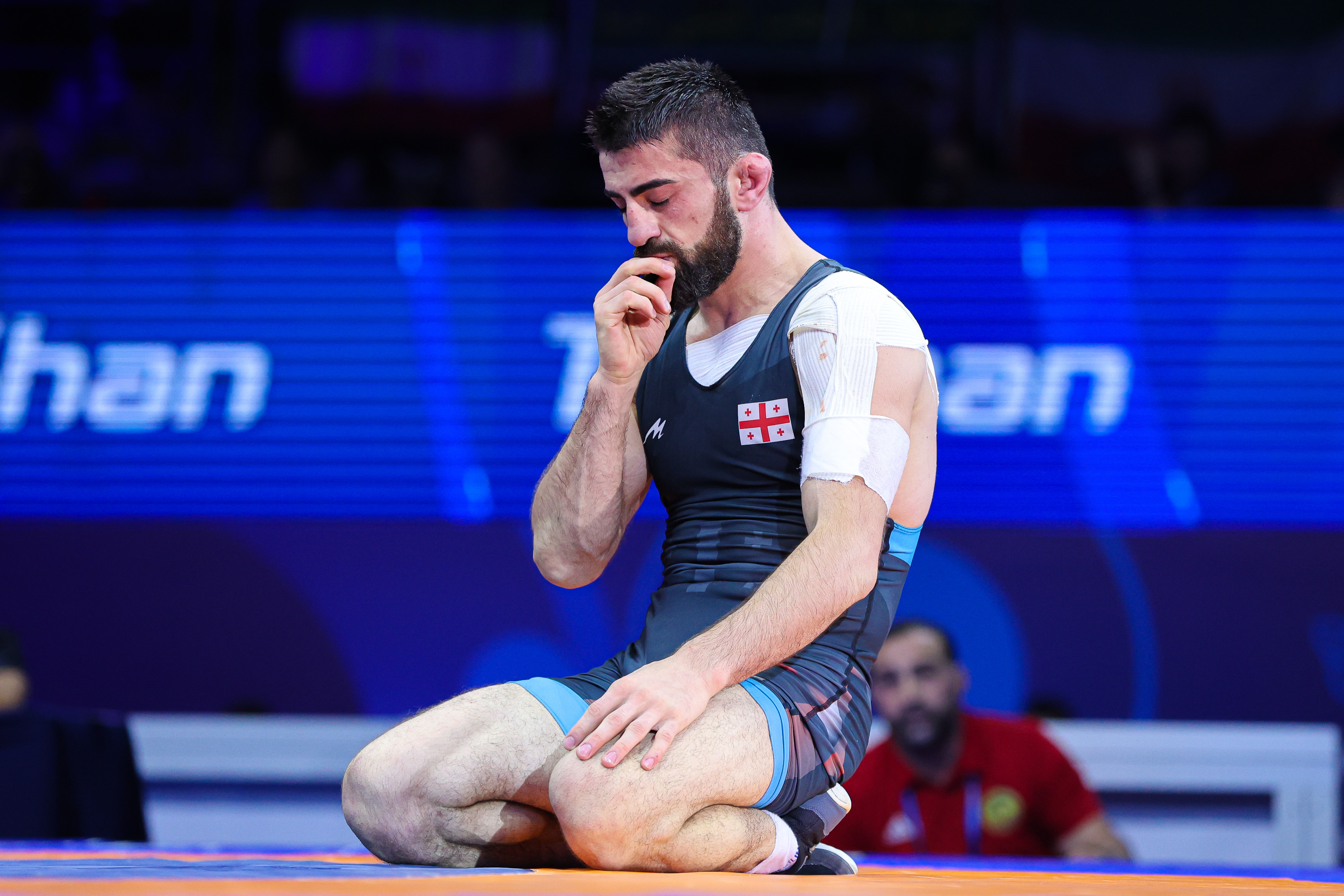 At 70kg, 2,720 points were the difference between the first and third-ranked wrestlers.

Despite winning Asian and world gold, Narikuni fell 2,720 points -- equivalent to a ninth-place finish at a Ranking Series event -- short of claiming the top spot at the weight.

Tajmuraz SALKAZANOV (SVK) grabbed the No. 1 spot in the world rankings after winning 15 consecutive matches before falling in the world finals to No. 2 Kyle DAKE (USA).

Salkazanov won his second consecutive European title and grabbed Ranking Series titles at the Matteo Pellicone and the Bolat Turlykhanov Cup. He competed in two more competitions than his American foe and outscored him by 13,000 points.

This season, Dake competed at the World and Pan-American Championships and won gold at both events. It was his fourth consecutive gold-medal finish at the World Championships and second title-winning effort at the Pan-Am C’ships. He finished the season with 58,000 ranking points, which was 11,000 points ahead of the third-ranked wrestler.

Soner DEMIRTAS (TUR) rounded out the season ranked No. 3 in the world after a trio of top ten finished. He started the season with a gold-medal win at the Yasar Dogu, then finished in fifth and eighth place at the World and European Championships, respectively. 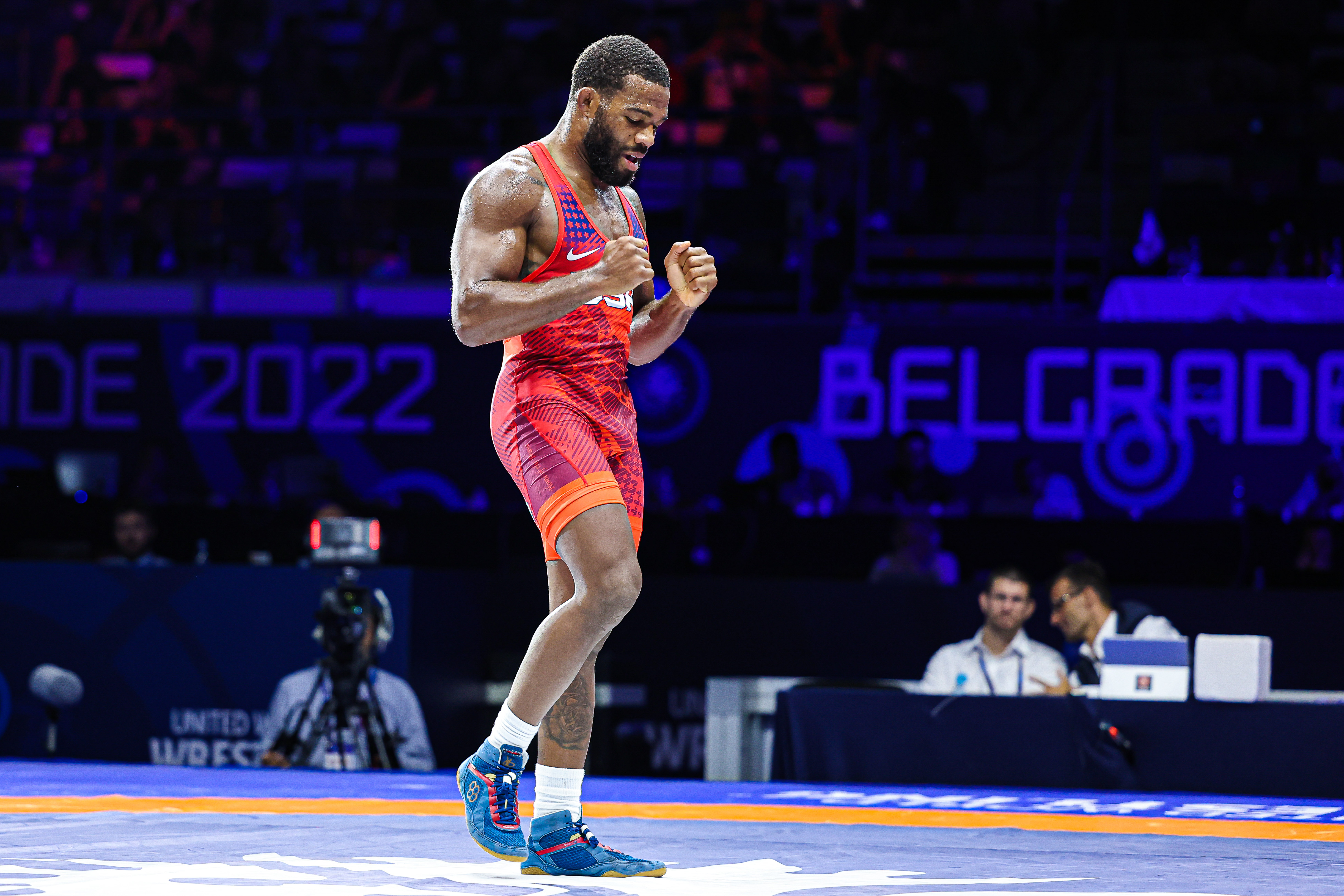 There was no one challenging Jordan BURROUGHS (USA) for the top spot at 79kg and he never gave anyone a chance as well. In Belgrade, Burroughs won a record sixth world title. He finished at the top of the rankings with 63000 points with 45000 points coming from the gold in Belgrade. Apart from that, he won the Yasar Dogu event at the beginning of the year for 13000 points before the Pan-Am gold awarded him 5000 points.

The second spot sees a surprise as Arsalan BUDAZHAPOV (KGZ) jumped from 14th to second. He has 51700 points with 31000 points coming from the bronze medal at the World Championships. He was also a bronze medalist at the Yasar Dogu for 10200 points. Another bronze at the Asian Championships awarded him 6500 points. He decided to participate in the Bolat Turlykhanov Cup as well and finished fifth for 4000 points.

But his participation in various events helped him finish better than World Championships silver medalist Mohammad NOKHODI (IRI) who has 45000 points. The silver in Belgrade was worth 37000 points and the other 8000 points were won at the Zouhaier Sghaier event as he finished that with a gold medal. 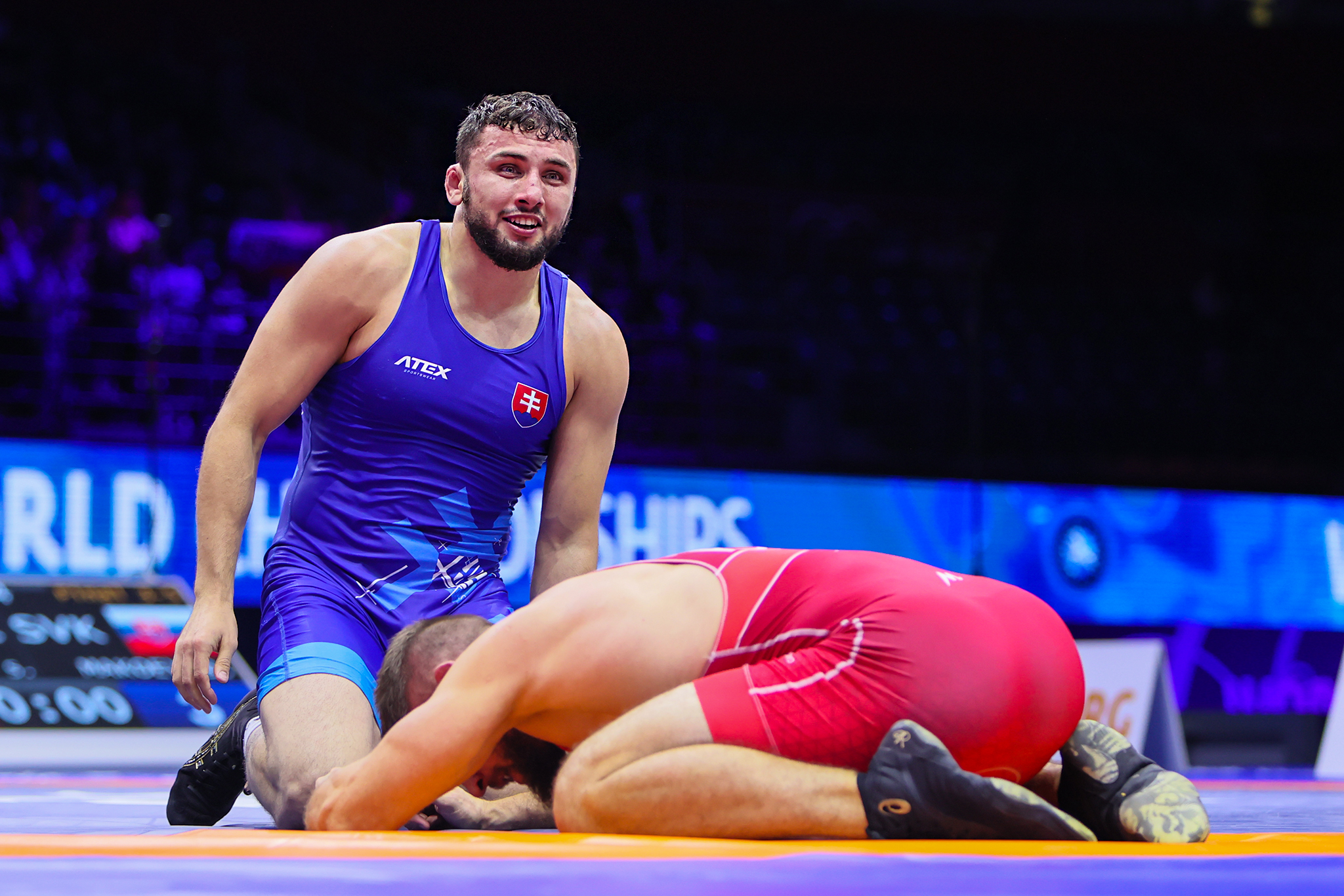 There was little separating the top two at 86kg but Boris MAKOEV (SVK) clinched the top spot with 100 points more than Azamat DAULETBEKOV (KAZ). Makoev finished with 49100 points thanks to his participation in four events. He began with a ninth-place finish at the European Championships for 6500 points before winning silver at Bolat Turlykhanov Cup and bronze at Matteo Pellicone. The two medals were worth a combined 11600 points. He finished the season with a bronze medal at the World Championships for 31000 points.

Dauletbekov also participated in four events with Asian Championships being his first. He won gold at 86kg for 10000 points before adding 4000 points for a fifth-place finish at the Bolat Turlykhanov Cup, perhaps the most crucial tournament in hindsight.

The Kazakhstan wrestler did win the Zouhaier Sghaier event but the gold was worth only 4000 points for him. He matched Makoev for the bronze at the World Championships but failed to overtake him for the top rank.

The third spot was claimed by world champion David TAYLOR (USA) who finished with 45000 points, all of which came from the gold he won in Belgrade. 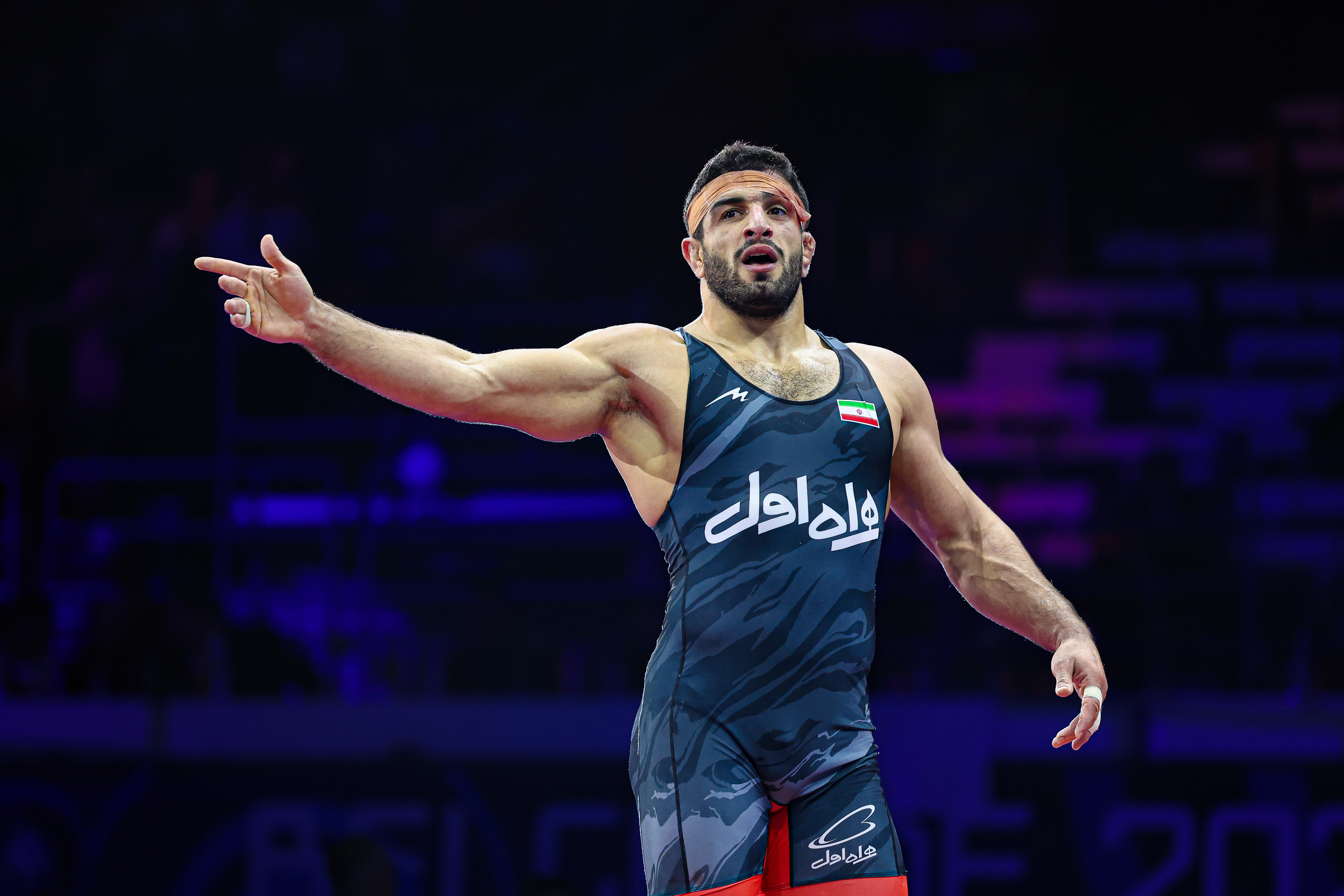 World champion Kamran GHASEMPOUR (IRI) was the clear favorite to finish at the first spot and he did that by winning the gold medal in Belgrade at 92kg. He got 45000 points for the win and 8000 points more from the gold he won at the Bolat Turlykhanov Cup for a total of 53000 points.

Miriani MAISURADZE (GEO) made a big jump from the 11th spot to the second by winning a bronze medal at the World Championships. With 49700 points, the made sure he was clear of the other bronze medalist Osman NURMAGOMEDOV (AZE). In the three events he participated in for points, Maisuradze won bronze at the European Championships for 6500 points, the same as Nurmagomedov who also won a bronze.

At the Matteo Pellicone, the two met in the final that was won by Nurmagomedov who got 8000 points while Maisuradze got 6400 points. Both then went on to win the bronze medals at the Worlds.

Maisuradze's 5800 points more than Nurmagomedov came from the Yasar Dogu event in which he finished ninth. 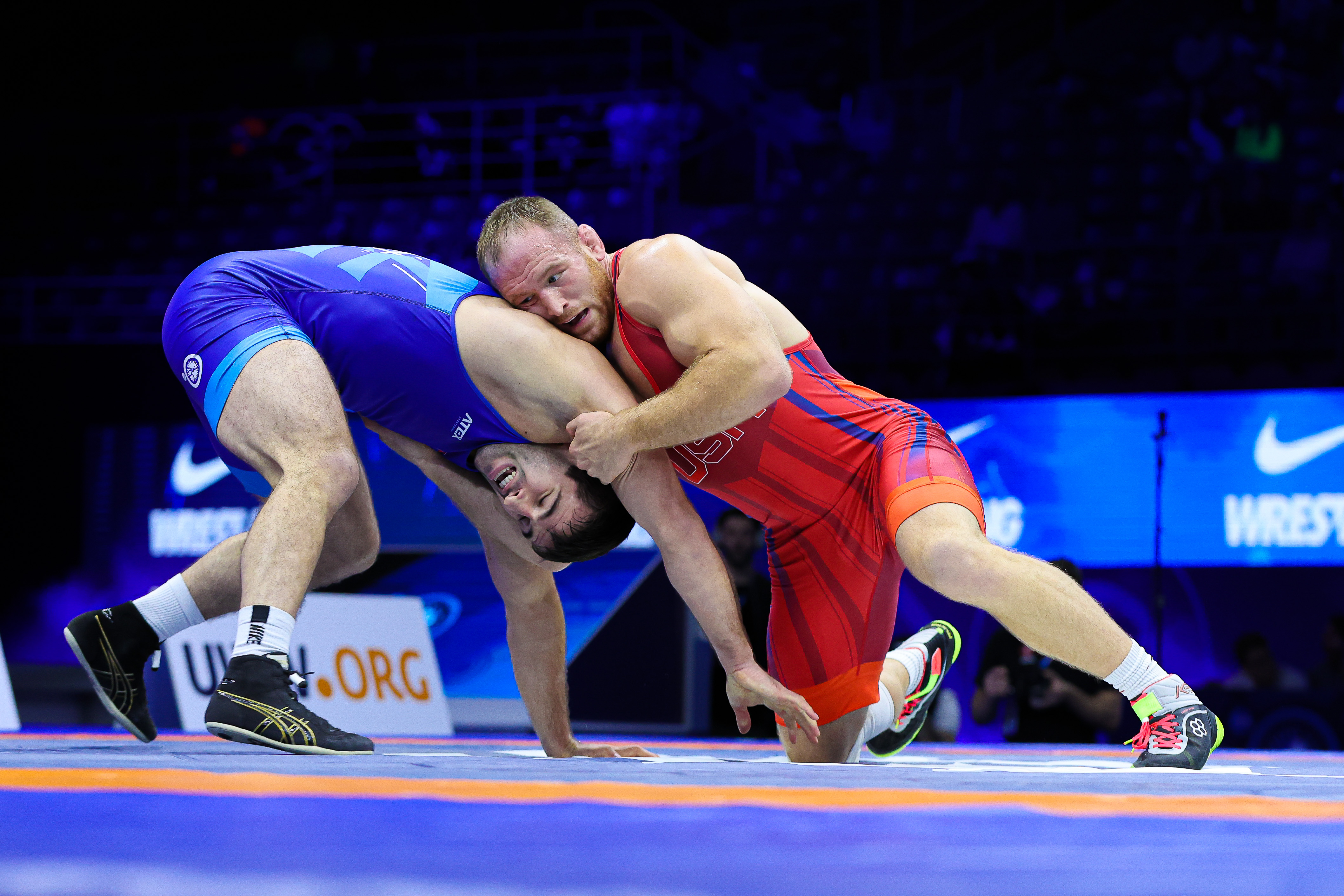 Kyle SNYDER (USA) and Batyrbek TSAKULOV (SVK) were in the world finals and finished number one and two in the rankings. (Photo: UWW / Kostandin Andonov)

The world finalists Kyle SNYDER (USA) and Batyrbek TSAKULOV (SVK) were in a close battle for the top spot and the former clinched it with 500 points more than Tsakulov.

Snyder won the Pan-Am gold medal for 10000 points before winning the Zouhaier Sghaier gold and World gold for 8000 points and 45000 points respectively to finish with 63000 points.

Tsakulov began with a bronze medal at the European Championships for 6500 points before winning two rankings series -- Bolat Turlykhanov and Matteo Pellicone -- for 8000 points and 11000 points respectively. His silver at World Championships was worth only 37000 points as he fell short of Snyder's tally. 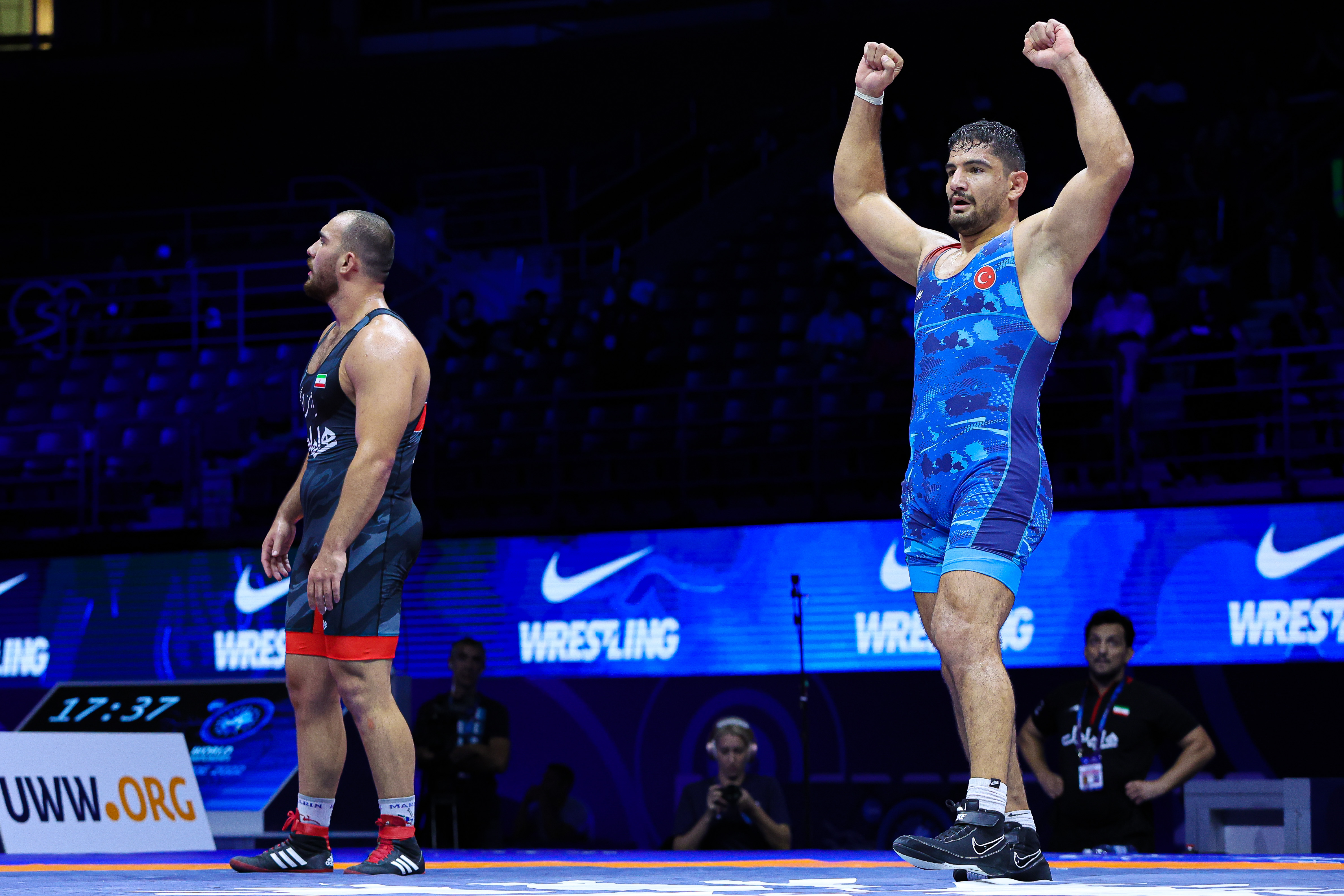 Taha AKGUL (TUR) and Geno PETRIASHVILI (GEO) exchanged the top two spots for a long time but the former raced ahead after winning the European and World Championships. The two gold medals were worth 55000 points and he also won the gold at Yasar Dogu for 13000 points, taking his total to 63000 points.

Petriashvili won silver at the European Championships for 8000 points but won the Matteo Pellicone and Zouhaier Sghaier rankings events, for 8000 points each. With 24000 points, gold at World Championships would have taken him to the top but he finished with bronze and 31000 points to settle for the second spot with 55000 points.