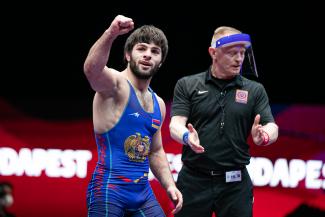 BUDAPEST, Hungary (March 18) --- It was an emotional day for Armenian wrestlers as rising stars Vazgen TEVANYAN (ARM) and Arsen HARUTYUNYAN (ARM) shined bright and secured their nation’s ticket to the Tokyo Olympic Games.

In total, 12 freestyle Olympic licenses were handed out through today’s European Olympic Games Qualifier at the BOK Sports Hall in the Hungarian capital city, with the top two wrestlers at each weight earning berths for their nations.

Coming into the weekend, arguably the biggest question hovering over the freestyle portion of the event was if Tevanyan could replicate his magical performance from December’s Individual World Cup where he stunned then-reigning world bronze medalist Ismail MSUSKAEV (HUN), 9-1, to win 65kg gold.

On Friday, the powerful Tevanyan reached the finals with four wins – three of which came against former world medalists. He started his day with an 11-0 technical superiority victory over world bronze medalist and Rio Olympian Vladimir DUBOV (BUL). Following a 7-5 win against Niurgun SKRIABIN (BLR), the Armenian ended Olympic champion Vladimer KHINCHEGASHVILI’s (GEO) day with a controlled 6-4 victory. Although the 22-year-old only won by two points, he shut down the world and Olympic champion for well over five minutes of the bout.

For a second straight Olympic cycle, Aliyev was responsible for qualifying Azerbaijan for the Olympic Games. In ’15, he claimed world gold and locked up Azerbaijan’s spot for the Rio Olympic Games.

The 29-year-old breezed to a 5-1 semifinal win over Maxim SACULTAN (MDA). He surrendered a step out point in the first, but from there, it was a one-sided bout. The Rio Olympic bronze medalist scored a pair of takedowns and a step out point to reach the finals, 5-1.

For a second straight Olympic cycle, Aliyev was responsible for qualifying Azerbaijan for the Olympic Games. In ’15, he claimed world gold and locked up Azerbaijan’s spot for the Rio Olympic Games.

The 29-year-old breezed to a 5-1 semifinal win over Maxim SACULTAN (MDA). He surrendered a step out point in the first, but from there, it was a one-sided bout. The Rio Olympic bronze medalist scored a pair of takedowns and a step out point to reach the finals, 5-1.

Arsen Haruyyunyan was the second Armenian youngster who sealed up an Olympic license on Thursday.

The 21-year-old led 1-0 after the first but used a nine-point second period to pick up the technical superiority victory. Harutyunyan, the ’19 European champion at 61kg, turned defense into offense twice in the second period – scoring a pair of counter-offensive takedowns, before thunderously slamming Yatsenko to his back for four addition points. He tacked on a step out point and claimed his spot in the finals with a 10-0 victory.

The 27-year-old Bulgarian had a slender 1-0 advantage (inactivity) after the opening period but opened the widened the gap in the second period with two high crotch takedowns and pair of leg laces.

At 74kg, Khadzhimurad GADZHIYEV (AZE) joined Aliyev in securing Azerbaijan’s nod at the Olympic Games. The Azeri controlled the 74kg semifinals match against Maxim VASILIOGLO (ROU) and reached the finals, 7-0.

He’ll take on ’18 world runner-up Avtandil KENTCHADZE (GEO) on Friday night for 74kg gold. The Georgian surrendered six point in the opening 30 seconds against Ali UMARPASHAEV (BUL). He gave up a takedown and two gut wrenches to start the match down 6-0, but surged back to pick up the first period fall via cradle and punch Georgia’s ticket to the Olympic Games.

Gocen blasted his way to the 86kg gold-medal bout and locked up Turkey’s place at the Tokyo Olympic Games with a 16-6 win over ’18 world silver medalist Boris MAKOEV (SVK). Coming into the semifinals, Gocen’s opponent hadn’t conceded a single point on the day, but that all changed as the Turkish wrestler lit up the scoreboard with 16 points.

In the 97kg semifinals, Aliaksandr HUSHTYN (BLR) had no problem with Abraham CONYEDO (ITA), as the Belarusian dominated his way to an Olympic berth with a 9-0 shutout win.

The second Turkish wrestler who secured an Olympic license was European champion Suleyman KARADENIZ (TUR). He edged Erik THIELE (GER), 2-1, and will compete for gold on Friday night.

Gennadij CUDINOVIC (GER) gassed Jamaladdin MAGOMEDOV (AZE) in the 125kg match and rolled into the finals with what would have been a 15-6, but the Azeri was disqualified after giving up three cautions. The German trailed the former world runner-up 6-3 but used his high pace to wear down on the Azeri and scored 12 unanswered points.

The twelfth and final Olympic qualification placement went to Belarus, thanks to a last-second takedown by Dzianis KHRAMIANKOU (BLR).

The match was filled with tension and drama and was fairly even, but Khramiankou trailed 4-2 with less than 10 seconds left in the closing period. The 24-year-old Belarusian spun behind and worked to get Sharipov’s knee to touch, but no points were awarded.

As time expired, the brick came in from Khramiankou’s corner, and after an intense review that left the big man on his hands and knees praying, the Belarusian was awarded the two-point takedown and the 4-4 criteria victory.

Khramiankou’s win stopped Russian from earning their sixth freestyle Olympic berth. The final opportunity they’ll have to qualify 125kg for Tokyo will be the World Olympic Qualifier in Bulgaria (May 6-9).

Wrestling returns on Friday morning at 11:00 (local time) with women’s wrestling. Follow all the action live on www.uww.org.

BUDAPEST, Hungary (April 7) -- The European Championships saw 10 Greco-Roman champions being crowned. One of them, Riza KAYAALP (TUR), won his 11th European title and is now two away from breaking the all-time record 12.

Azerbaijan won the team title over Turkey while Georgia finished third in the title race. Azerbaijan had all ten wrestlers in medal bouts with eight coming home with at least a medal. Only two wrestlers failed to win a medal in Budapest.

Watch all the 10 gold medal bouts from the European Championships.

Azizli wrestled his rival and world champion from 2019 Nugzari Tsurtsumia (GEO). Prior to this meeting, the two had wrestled each other four times with Azizli enjoying a perfect 4-0 record over Tsurtsumia. He extended that record to 5-0 when he won 8-2 in the 55kg final.

Azizli got the point for his opponent's passivity and a roll gave him a 3-1 lead. Tsurtsumia tried exposing with a head pinch but in turn, ended up giving two points. In the same action, Azizli scored two more and led 7-1 with two minutes remaining before closing out the bout 8-2.

Kerem KAMAL (TUR) was third time lucky in the final as he won the gold after previously losing two finals in 2020 and 2021. But in his third final in three years, he defeated former European champ Edmond NAZARYAN (BUL) 5-0 to win at 60kg.

Georgia did have a gold medalist Saturday as U23 World champion Leri Abuladze (GEO) added a European title to his resume. He wrestled Taleh Mammadov (AZE) in the 63kg final and controlled it well. His one scoring action in par terre in the second period was enough to give him a 3-1 win over Mammadov, his first in two meetings.

Murat FIRAT (TUR) denied Krisztian VANCZA (HUN) a gold medal at home. In the close final, Firat used an exposure close to the zone to win 3-1. Vancza had his chance to take the lead when Firat was called passive but he did not manage to score any points from par terre in the second period.

Robert FRITSCH (HUN) upset Rio bronze medalist Shmagi BOLKVADZE (GEO), 3-2, at the 72kg final. In one of the closest bouts of the tournament, Bolkvadze led 1-0 at the break for a passivity point. But Fritsch bounced back with a gut wrench from par terre to lead 3-1. A reversal point for Bolkvadze but his lead to 3-2 but he managed to hang on for the win.

Malkhas AMOYAN (ARM) won the 77kg European title. The world champion at 72kg was making his debut at 77kg and wrestled Yunus Basar (TUR) in the final. He was called passive and gave up a gut wrench to trail 3-0 at the break. But he got the same action using a chest wrap in the second period to lead 3-3 on criteria.

Turkey challenged the call asking for a leg foul but the judges found no negative wrestling which gave another point to Amoyan, extending his lead 4-3 with two minutes remaining.

The silver medalist from Warsaw European Championships was again called passive but this time Basar could not get any exposure from par terre as Amoyan let out a loud scream to celebrate his maiden gold at the continental championships.

In a historic feat, Rafiq HUSEYNOV (AZE) became the first-ever Azerbaijan wrestler to win three European titles. Wrestling Gela BOLKVADZE (GEO) in the 82kg final, Huseynov gave up a point for passivity but defended the par terre position. Georgia asked for a challenge for Huseynov's fleeing but lost it. Huseynov got the second point from Bolkvadze's passivity and kept the 2-1 lead to win the gold.

Bisultanov won the gold for Denmark at the European championship, outscoring his opponents 35-0 over two days and with his crowd-pleasing style became a fan favorite in Budapest. Wrestling Nicu Ojog (ROU) in the 87kg final, Bisultanov took only one minute and 13 seconds to finish the bout 8-0. In his four bouts, he did not wrestle the full six minutes in any, spending just over 13 minutes on the mat.

Kiril MILOV (BUL) upgraded from his silver in 2019. With fond memories of Budapest, he changed the color of his medal with an error-less performance in the final against Arvi SAVOLAINEN (FIN), 4-1. Milov got the match-deciding gut wrench in the second period to defeat the former U23 world champion Savolainen who won the title in Budapest three years ago.

Riza Kayaalp (TUR) is on a mission to break Alexander Karelin (RWF) record of 12 European gold medals. He took another step closer to that by winning his 11th gold in Budapest. The four-time world champion defeated Danila Sotnikov (ITA), 4-0 in the 130kg final using a head-pinch exposure when the Italian was trying to push him out.