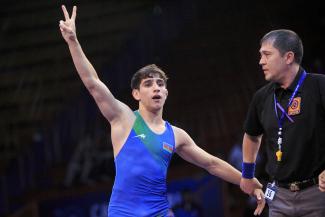 ZAGREB, Croatia – On the second night of the Cadet World Championships, five champs were crowned in men’s freestyle. The session was highlighted by Alihasan AMIRLI (AZE) winning his second-straight World title.

Amirli repeated his gold-medal performance with a 6-1 decision in the 48 kg finals over Richard FIGUEROA (USA). Putting Figueroa to his back in a big second-period takedown, Amirli took over the lead, which he held onto for back-to-back World gold medals.

Azerbaijan picked up another World champion later in the session as Turan BAYRAMOV improved on his 2017 World silver-medal finish, winning the top spot at 65 kg over Inalbek SHERIEV (RUS). 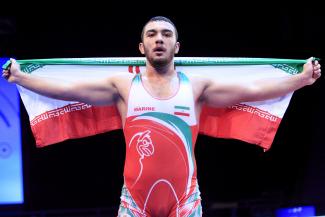 2017 Cadet Asian bronze medalist Jamshidbek MARUFOV (UZB) took the crown at 55 kg, holding off this year’s Cadet Asian champion Hayato FUJITA (JPN) in a 4-3 bout. Marufov was up 4-0 early halfway through the second period. Fujita made a late push, but it was not enough as Uzbekistan claimed a World gold.

At 80 kg, Dmitrii ELKANOV (RUS) trailed 2018 Cadet Asian champion Mohammedreza GHIYASI (IRI), 6-2, late in the match. With just four seconds left, Elkanov threw Ghiyasi with double overhooks to take the lead on criteria. Iran’s corner challenged but it failed, resulting in a 7-6 win for Elkanov and a World title.

The tournament continues tomorrow on unitedworldwrestling.com. 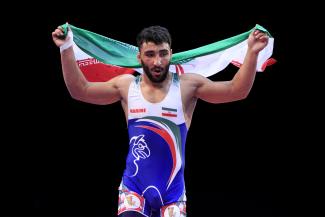 Iran won the team race, putting up 130 points with four finalists and two Greco World champions. Russia took second with 108 points, and rounding out the top five was Turkey in third with 91 points, Georgia in fourth with 89 points and Uzbekistan in fifth with 83 points.

Iandarov held a 2-0 lead at the break, but the two went back and forth, trading leads in the second period. Eventually Iandarov took down the 2017 Cadet World silver medalist and rattled off three gut wrenches for a technical fall win, 17-7.

Lazizkhon UZBEKOV (UZB) struck first against Laishram MEITEI (IND) and held onto the lead throughout the bout. The Uzbek used two sets of exposure to win the World title at 51 kg, 6-2.

In the final at 60 kg, points were only scored on passivities, cautions and failed challenges as Serhat KIRIK (TUR), who finished fifth at the European Championships, knocked off Asian silver medalist Shahin BADAGHI MOFRAD (IRI), 4-1.

Gutu, who won silver at 2018 Euros, drew first blood with a duck under for a takedown, followed by a correct throw. Gutu took his momentum and a 6-2 lead into the second period. There, he extended his lead with a throw by and finished off the bout with a big lift for four points to end the match in a tech fall.

The winner at 92 kg was determined in the final 20 seconds of the match.

Aleksei MILESHIN (RUS) held a 3-0 advantage at the break over Asian champion Mohammad NOSRATI (IRI), thanks to a correct throw he executed after Nosrati was put down in par terre.

In the second period, Nosrati got a chance on top after a Mileshin passivity call. With only 20 seconds left, the Iranian scored on a gut wrench and held the Russian off for a 3-3 win on criteria and the gold medal.