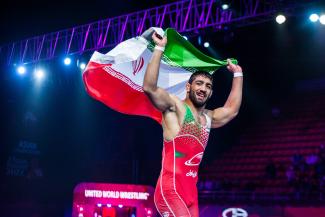 ULAANBAATAR, Mongolia (April 19) -- Naser ALIZADEH (IRI) can certainly take pride in winning a second straight gold medal at the Asian Championships. Particularly since he had to beat another champion from 2021 to do it.

Defending champion Alizadeh defeated Jalgasbay BERDIMURATOV (UZB) 3-1 in an intense Greco-Roman 87kg final on the opening day of the six-day tournament at the Buyant Ukhaa Sports Palace in the Mongolian capital.

"I am part of the national team and it’s an honor," said Alizadeh, who was also a world U23 bronze medalist in 2021.

Alizadeh's ability to take advantage of the par terre position, while being able to defend when he was put on bottom, made the difference in beating Berdimuratov, who won the 82kg gold last year in Almaty.

"The final is always tough and I had the point for passivity in the first period. I managed to score from par terre and lead 3-0," Alizadeh said. "In the second period, he got the passivity but I was determined to defend. In my mind, I was thinking that I have to only defend this attack to win."

Alizadeh was somewhat amazed that he could achieve the golden repeat. 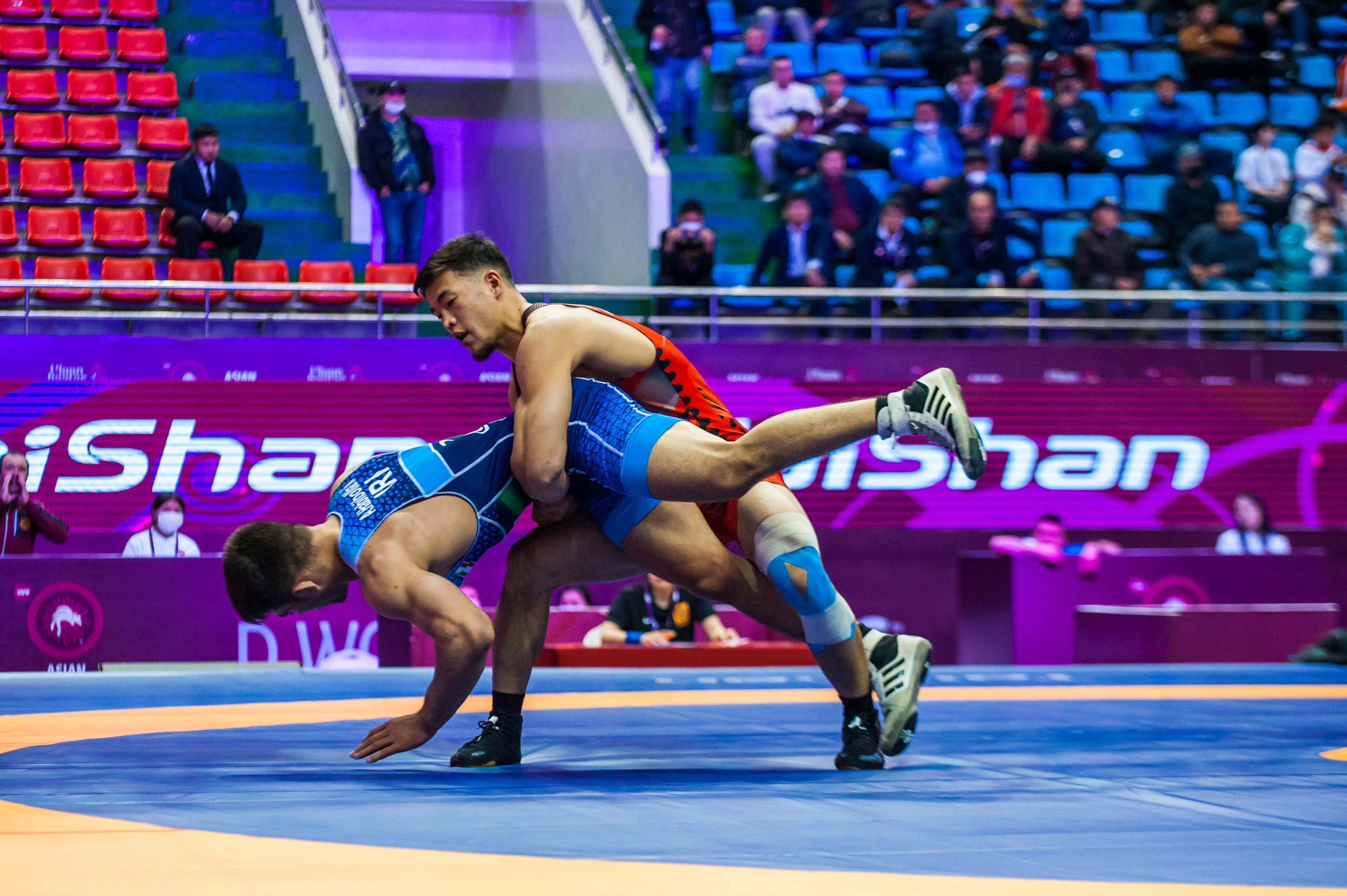 Makhmudov wasn't overly dominant in picking up his second Asian gold but got the job done in notching a 3-1 victory over veteran Maxat YEREZHEPOV (KAZ) in the 77kg final.

Makhmudov, who won the 72kg title on home soil in Bishkek in 2018 as a teenager, scored with a gut wrench in his chance at par terre in the second period to win.

For his part, Yerezhepov, who will turn 32 years old later this week, added a seventh Asian medal to his collection, which includes gold from 2017.

In another indication of the changing of the guard, Makhmudov had to get by former Olympic champion Hyeonwoo KIM (KOR), who had won five Asian titles between 2010 and 2019. Makhmudov won their semifinal clash 4-1.

"It's a great honor to me to defeat such a wrestler as Kim, he won the Olympic Games, World Championship, and Asian Games," Makhmudov said. 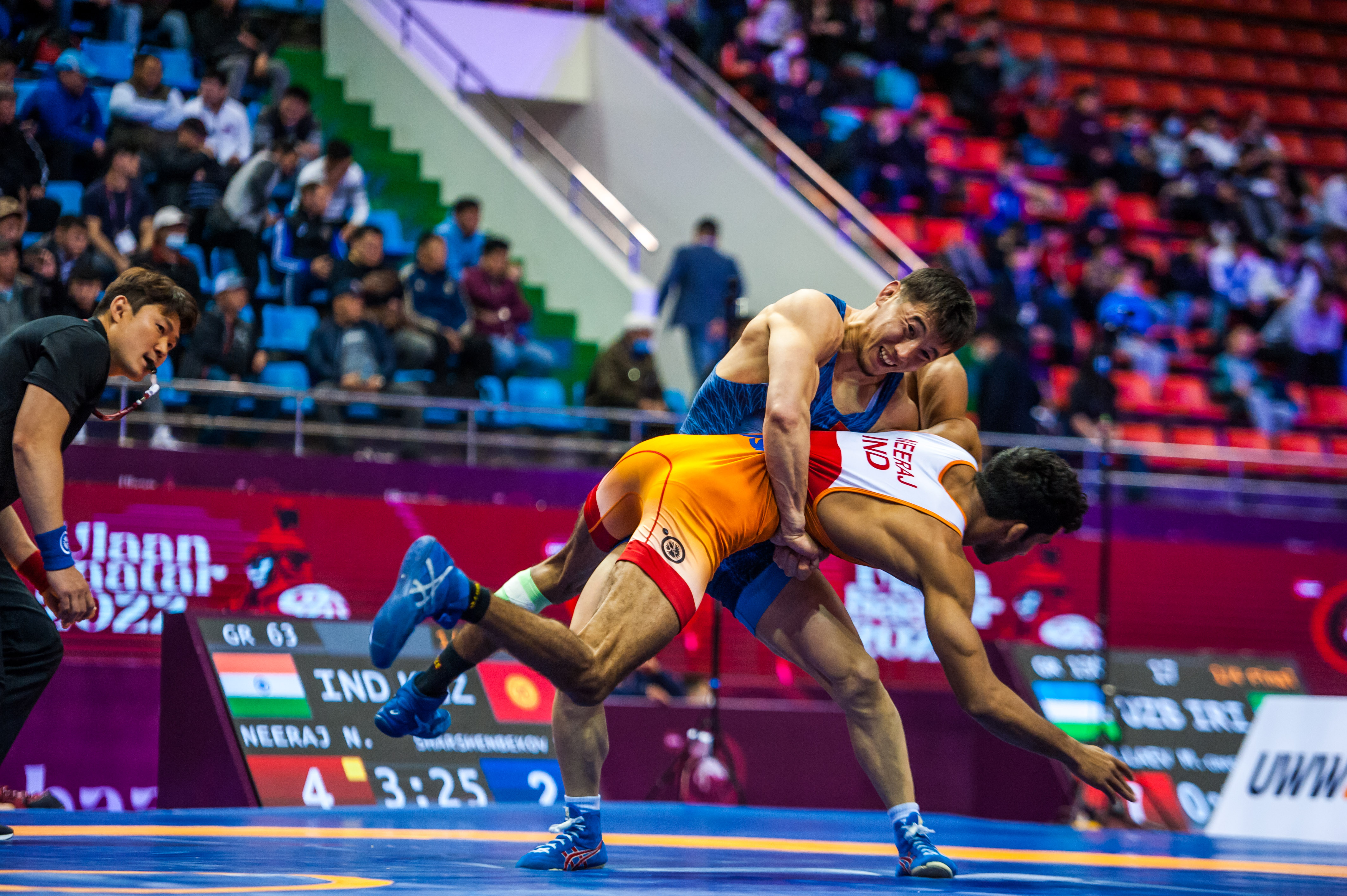 Sharshenbekov earned his first Asian title with his third straight victory by fall of the day, stopping two-time world medalist Mirambek AINAGULOV (KAZ) at 4:06 of the 63kg final.

With a 1-0 lead in the second period, Sharshenbekov pancaked Ainagulov onto his back, although the Kazakh wrestler believed his opponent used his leg inappropriately in the maneuver and all but gave up.

"Thanks a lot to all my coaches," said Sharshenbekov, whose main claim to fame up to his point was a 2017 Asian junior title and a fifth-place finish at the 2019 World Championships.

"This is my first victory and God bless not the last one. I want to become an Olympic champion and world champion." 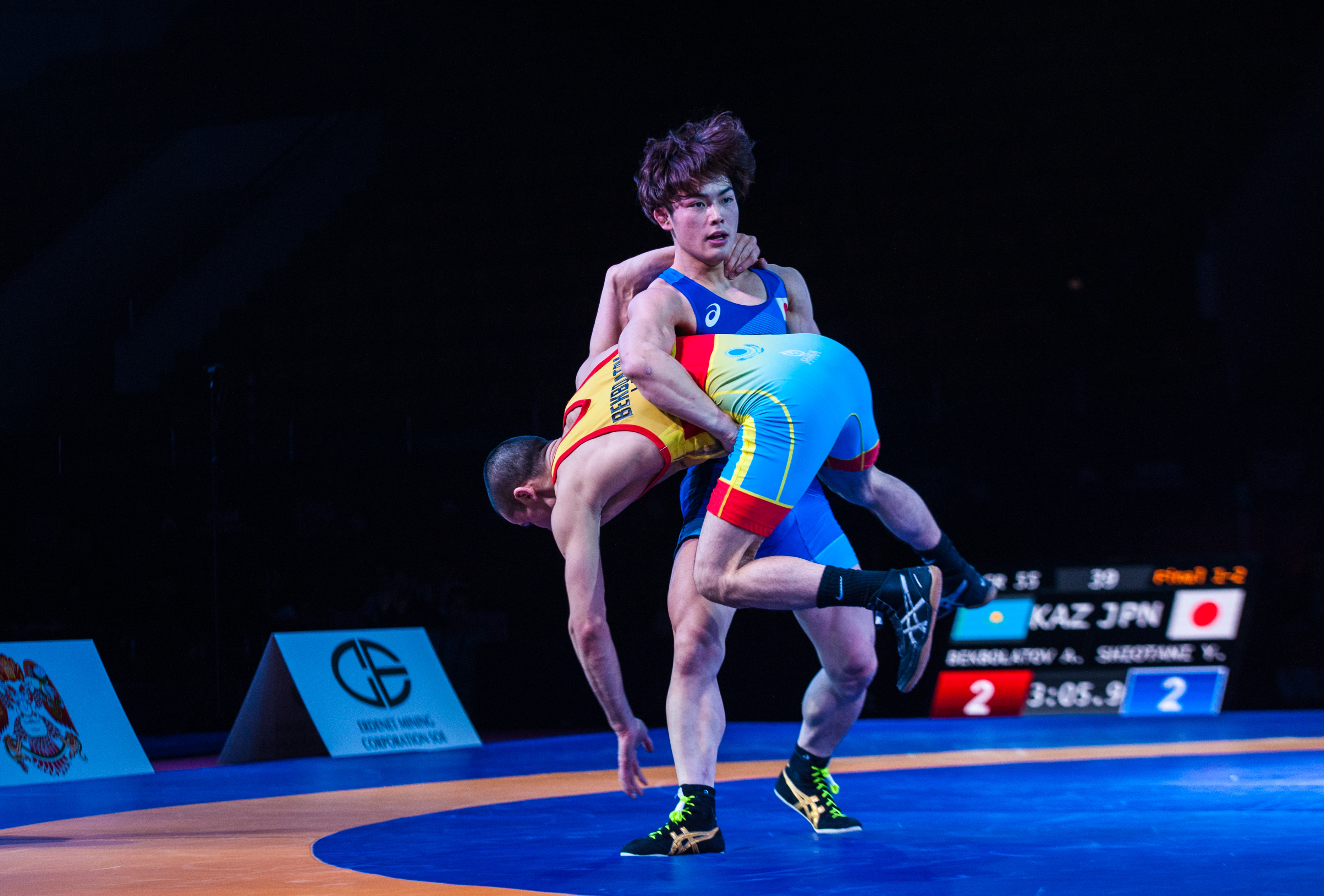 In other action, young Yu SHIOTANI (JPN) successfully defended his 55kg crown, although the score in the final -- a 13-2 technical fall over Amangali BEKBOLATOV (KAZ) -- does not reflect the fact that it was his third come-from-behind victory of the day.

"There was a lot of pressure," Shiotani said of being the defending champion. "I was able to wrestle my way [in the final], so I'm very happy."

Shiotani spotted Bekbolatov an early takedown, then came back with a takedown of his own. From there, he took matters into his own hands, ripping off a pair of his trademark big throws, the first for 4 and the second for 5 to end the match at 2:58.

"At first I gave up points, but I thought I could come back," the 20-year-old Tokyo native said. "I took advantage of my chances and that led to the win."

Shiotani also had to rally late in snatching a 6-5 victory in the first round over Hyeokjin JEON (KOR) after trailing 0-5, then again in the semifinals, where he overcame a 4-point deficit to defeat Jasurbek ORTIKBOEV (UZB) 10-8.

"I wasn't in very good condition, and that's why all of my wins were come-from-behind," Shiotani revealed, adding that he had trouble making weight.

The victory in the final made Shiotani the first-ever Japanese to win consecutive Asian titles in Greco, and only the second two-time champion after Kenichiro FUMITA (JPN), who won the 60kg gold in 2017 and 2020.

The way that Shiotani won the final was reminiscent of his victory over world champion Ken MATSUI (JPN) at last December's All-Japan Championships, where he twice slammed Matsui down with five-point throws.

For Matsui to defend his world title, he now has to win the title at the All-Japan Invitational Championships in June, where he could face Shiotani, then beat Shiotani in a playoff for the spot on the team to Belgrade.

"I might have to face Matsui again in June, but I will do everything I can to win," Shiotani said. 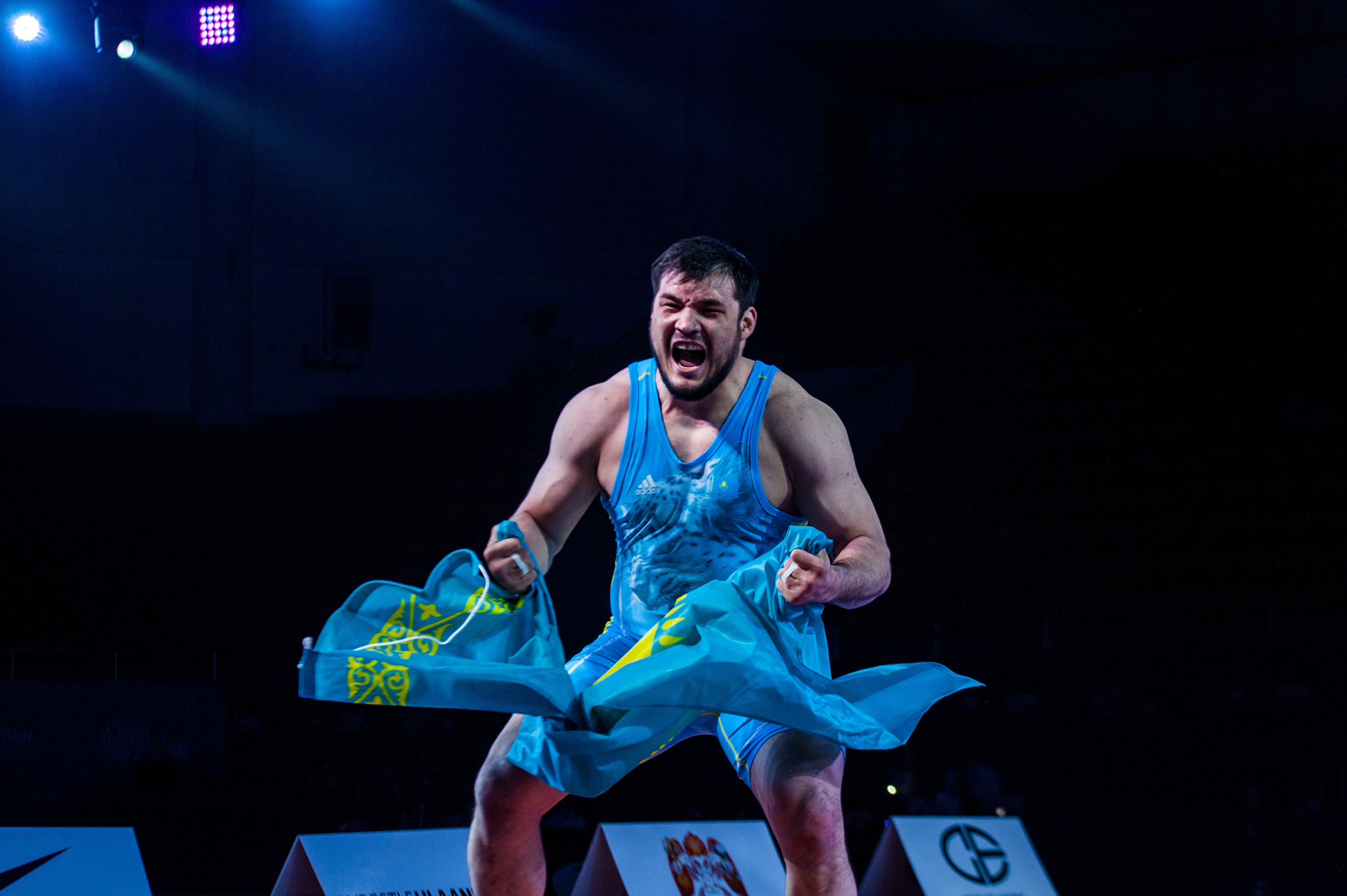 The most one-sided victory of Tuesday's finals came in the last bout of the night at 130kg, with 2021 silver medalist Alimkhan SYZDYKOV (KAZ) putting away 2020 runner-up Minseok KIM (KOR) by fall in 2:28 after scoring a pair of 4-point moves.

After opening the scoring with a quickfire stepout right off the whistle, Syzdykov used a back lift and roll to increase his lead to 5-0. He then got Kim into a bear hug that sent him back to the mat, where he clamped down for the fall.

In the bronze-medal matches, host Mongolia had two chances to win its first-ever Asian medal in Greco, but its hopes were dashed by Indian opponents.

At 55kg, Arjun HALAKURKI (IND) was put on his back late in his match by Davaabandi MUNKH ERDENE (MGL) but had built up enough of a lead to hold on for a 10-7 victory that included five stepouts.

Sunil KUMAR (IND), a 2019 silver medalist, had less trouble adding a bronze to his collection at 87kg in defeating Batbayar LUTBAYAR (MGL) by a 9-1 technical fall.

NEERAJ (IND) also picked up a bronze for India at 63kg, jumping out to a seven-point lead before holding on for a 7-4 win over Islomjon BAKHRAMOV (UZB), the 2019 champion at 60kg and a three-time Asian medalist.

Uzbekistan came away with two bronze courtesy of Jasurbek ORTIKBOEV (UZB) at 55kg and Muminjon ABDULLAEV (UZB) at 130kg, the latter scoring a 35-second fall over Timothy LOH (SGP), Singapore's first-ever entry in Greco at an Asian Championships.

Iran also had two bronze medalists in Iman KHOONMOHAMMADI (IRI) at 63kg and Aref HABIBOLLAHI (IRI) at 77kg, both of whom were awarded victories by default.

Kodai SAKURABA (JPN), the 2019 world U23 silver medalist, captured the other bronze at 77kg with an 11-1 technical fall over Sajan BHANWALA (IND) that included two 4-point throws.

At 87kg, Nursultan TURSYNOV (KAZ), a former Asian champion and runner-up, picked up a first bronze with a 7-2 victory over Melis AITBEKOV (KGZ). Tursynov scored all of his points from the par terre in the first period, when he reeled off three consecutive rolls.

Roman KIM (KGZ) took the other bronze at 130kg when Arata SONODA (JPN) defaulted due to a knee injury.

ULAANBAATAR, Mongolia (April 29) -- Japan came out all guns blazing at the Asian Championships after missing the previous edition due to travel restrictions. The women's team won the team title comfortably.

Here are the 10 finals from the women's wrestling at the Asian Championships.