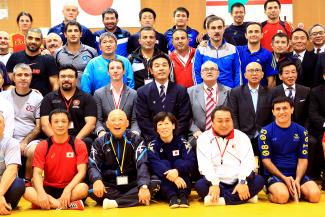 The Japanese Wrestling Federation hosted the three-day clinic at the Ajinomoto National Training Center, inviting more than 30 coaches from 12 countries to take part in classroom discussions and on-the-mat instruction.

The aim of the clinic was to help coaches implement more high-scoring techniques through improved training techniques and performance analysis. Recent studies conducted by United World Wrestling had shown that the wrestlers with the most diverse arsenal of techniques were more successful than those with a limited number of techniques. 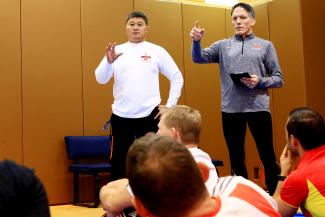 On-the-mat instruction was led by some of the world's top coaches including Terry STEINER (USA), Batbayar BUYANEDELGAR (MGL) and Ivan IVANOV (BUL) who focused on the fundamental techniques of freestyle, women’s wrestling and Greco-Roman.

Ivanov’s efforts were complimented by the performance analysis presented by David Lopez (MEX) and Harold TUNNEMAN (GER) who utilized Dartfish video review to help showcase a variety of scoring techniques from popular wrestlers. The team also provided data to the coaches, which included a comprehensive breakdown of more than 400 matches, including those from each of the 108 wrestlers who placed in the top six at the 2015 World Championships in Las Vegas.

The Referee Commission also sent representative Ibrahim CICIOGLU (TUR) who answered questions and concerns of the coaches from the perspective of the referees and delivered a video session with a clarification of rules. Cicioglu also went to the mats to provide practical sessions of the video. 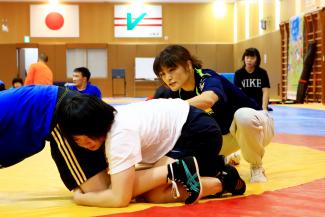 The course also included the participation of three-time Olympic champion Kaori ICHO (JPN) who showed the attendees several of her various techniques and strategies.

“I hope that clinics like this will help the women’s sport catch up to the men’s sport,” said Icho, who will be looking for her fourth Olympic gold in Rio de Janerio. “I’m very interested in becoming a coach after my career. It’s interesting for me to think about each individual and what I could say to help motivate them on the mats!”

“I’m jealous of the girls attending the clinic, because they see coaches from all over the world. It’s a wonderful opportunity and very generous of these coaches.” 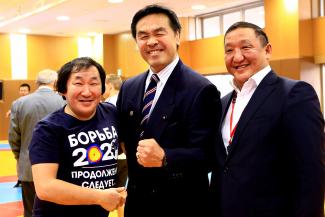 The board of the Japan Wrestling Federation, including President Tomiaki FUKUDA and United World Wrestling Bureau Member Hideki TOMIYAMA were also present for much of the course. The JWF was instrumental in assuring a quality facility, including meals, were provided to all those in attendance.

Japanese Minister for Education, Culture, Sports, Science and Technology Hiroshi HASE was also on hand for part of the festivities. A former Olympic wrestler who competed at the 1984 Olympics in Los Angeles, Minister Hase spoke about the importance of integrity and anti-doping education to protect the sport of wrestling.

The next coaching course will be a Level One Coaching Clinic in Tblisi, Georgia and will feature instructors from the UK and Portugal and bring together coaches from Georgia, Azerbaijan and Armenia. 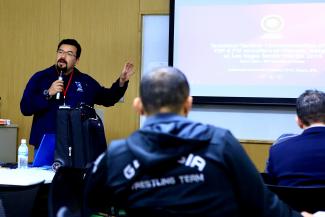 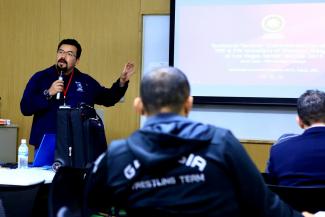